Excessive boron in soil or irrigation water is not widespread in the Central Valley, but where present, it can be a substantial obstacle to almond production. A rootstock trial in Yolo County was designed to find which almond rootstocks do better or worse under high boron conditions. So far Nickels has done best, and Krymsk 86 worst.

In 2011, Carolyn Debuse, former Yolo-Solano UCCE tree crop advisor, started a trial to measure the impact of heavy, clay soils and high boron water on different almond rootstocks with the support of grower Dave Scheuring. ‘Nonpareil’ nursery grafted trees on eight rootstocks were planted February 2011, at 18’x22’ (110 trees per acre) – Brights-5, FxA, Hansen536, Krymsk86, Lovell, Nickels, Rootpac-R and Viking. Twenty Titan SG1s were added that April but not in the replicated trial. The trial is located in Yolo County north of Cache Creek. Boron in the irrigation water ranges from <1mg/l to 3.1 mg/l, depending on year and month.

The second year yield was measured this August. The yield ranking of all the rootstocks will require more years of data, but for both years there is a consistent leader and laggard. Both years, Nickels has produced significantly higher yields than most of the other rootstocks and Krymsk 86 had significantly lower yields, as can be seen in Figure 1. 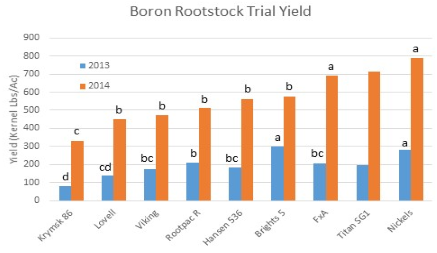 Figure 1. Boron rootstock trial yield results for 3rd and 4th leaf (2013, 2014). Scaled from the 5 tree sample average to per acre yields based on the 110 trees per acre spacing.

Note: Different letters indicate groupings of statistically significantly different yields. Nickels is the only “a” rootstock both years, and Krymsk 86 is the only rootstock with the lowest ranking both years (“d” in 2013, “c” in 2014). Because there are not as many later planted Titan trees, we cannot make statistical comparisons with other rootstocks. However, based on limited yield data, Titan seem to be performing about the same as FxA.

More than 70% of the variability in yield can be explained by tree size. But, are the lower-yielding trees naturally smaller, or are the high levels of boron reducing size? The answer will hopefully become apparent with more years of data. However, comparison with a Butte County rootstock trial indicates lower yields are at least partly due to lower boron tolerance. At the Butte County trial in the 4th leaf, Krymsk 86 yielded 12% lower than Nickels. At the boron trial, Krymsk 86 yielded 58% lower than Nickels.

More years of data will give a clearer picture of how the 9 rootstocks in this trial compare in terms of boron tolerance. But for those who need to make decisions now, based on the results we have so far, it looks like Krymsk 86 is inadvisable for high boron conditions and Nickels is the safest bet for a productive orchard under high boron conditions.