During about the second or third week in June, many Howard walnut trees experienced nut drop of perhaps as many as 100 nuts per tree, with many trees losing no more than 60 nuts per tree. These nuts were full size with the shell beginning to harden. Cutting open an immediately dropped nut, you could see darkening of the inside watery kernel material. This nut drop, widespread with the Howard variety, was similarly noted in 2003, 2011, and 2013. Unfortunately, unlike in some past years with substantial June Howard drop, the Sacramento Valley crop in 2019 appeared below average to some growers and PCAs even before the June nut drop. Several possible causes are explored in this article. 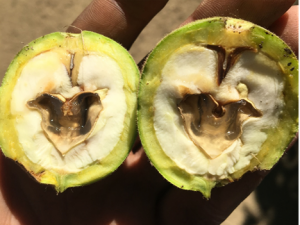 Lack of Pollination? From studies that have been done on pollination, we know that un-pollinated walnut flowers fall off about 4 or 5 weeks after bloom. We do not believe that pollination is likely to be a limiting factor in walnuts, especially under most typical situations where there are many walnuts in the area and lots of pollen in the air. Further, these dropped nuts were much larger and dropped later than nutlets aborted due to a lack of pollination or fertilization. Lack of pollination or fertilization is not a likely explanation.

Wet soil? In 2003, 2011, and 2019 spring conditions were wet, and it has been suggested that the wet soils resulted in stress due to saturation. Bruce Lampinen at UC Davis has found a correlation between nut drop and pressure chamber midday stem water potential readings indicating that the tree is wet (i.e. at or above the fully watered baseline) in 2003 (Tehama), 2009 (Arbuckle), and 2014 (on-campus at UC Davis). However, in 2019 even orchards that didn’t irrigate until mid-June when midday stem water potential readings were 2 bars below the fully watered baseline (more dry), still experienced nut drop. Although perhaps not explaining the entire phenomenon, the relationship between wet trees from either rainfall or irrigation and Howard nut drop, is likely part of the story. 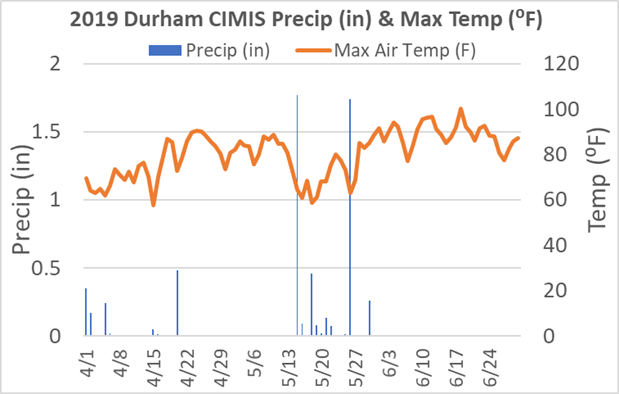 Abrupt temperature change? This year, the daily high temperatures at the Durham, CA CIMIS station swung dramatically (Figure 1). The second and third weeks of May were cool (highs in the 60’s and 70’s), while temperatures reached 100°F in mid-June. One speculation is that a sudden increase in temperature at a critical stage in nut development may have killed the developing kernel resulting in the nut drop, however to our knowledge there is currently no research to back-up this idea.

Combination of factors? It’s possible that a sudden increase in temperature coming when soils are saturated might have contributed. In particular, the rapid increase in temperatures from late May through the first half of June following substantial rainfall in the second and third weeks of May (Figure 1) could have provided these stressful conditions. Perhaps Howard is more sensitive to any stress – too much or too little water, sudden temperature extremes, heavy crops, or soil type may be playing a part as well. Environmental stress is the suggested cause and Howard may just be more sensitive to stress than other cultivars. Indeed in 2019, in an on-campus trial that Bruce Lampinen suspected of being over-irrigated, he observed significantly higher drop under Howard trees than Chandler or Tulare.

We’ve observed this problem before under similar environmental conditions…so what caused it? The short answer is that no one knows for sure. In 2013, the drop was associated with heavily cropped younger orchards. However, in 2019 drop was experienced across a range of orchard ages and the cropping level was not initially heavy in the Sacramento Valley. Tree stress experienced by a rapid temperature increase following saturated conditions is currently the best guess among researchers and growers. Like the November freezing events and spring mesophyll collapse, unusual environmental patterns and subsequent symptoms in walnut have recently been plentiful in the Sacramento Valley!