Being called out to look at a single tree is an interesting proposition. Can a single sick tree really be worth the time and energy, when we are all working to manage the health of hundreds or thousands of trees? In this case, the trip was well worth it!

I was called out in mid-July by a PCA to evaluate a single sick walnut tree (photo 1). The tree was said to have unusual symptoms and be surrounded by completely healthy trees. Indeed, the tree was surrounded by healthy, uniform trees, while the single tree in question had multiple scaffolds with patches of dead leaves. 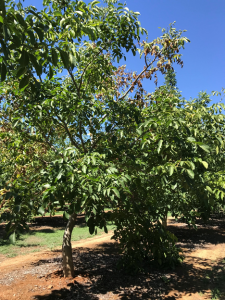 Photo 1. Sick tree in question with patches of dead leaves.

Upon closer inspection, the tree became very interesting! The patches of dead leaves were on portions of the tree where entire scaffolds, as well as smaller side branches, contained a tumorous and uneven appearance (photos 2-4). 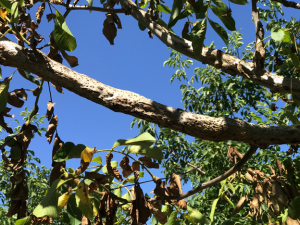 Photo 2. Scaffolds and smaller branches had a tumorous and uneven appearance. 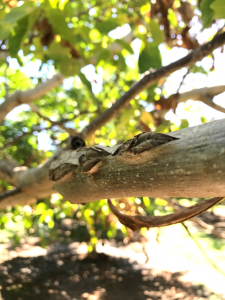 Photo 3. Scaffolds and smaller branches had a tumorous and uneven appearance. 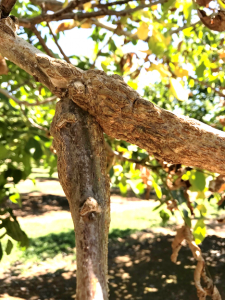 Photo 4. Scaffolds and smaller branches had a tumorous and uneven appearance.

Other growths appeared at the collar or base of branches (photos 5 & 6). The patches of dead leaves were found to be on shoots also suffering from the girdling of tumorous/gall like growths. 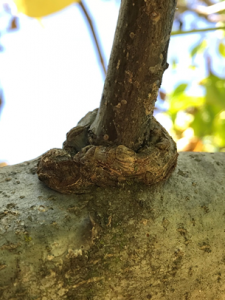 Photo 5. Growths at the collar or base of branches. 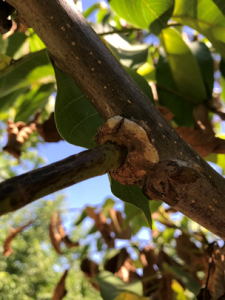 Photo 6. Growths at the collar or base of branches.

I was very stumped by these symptoms. Tumorous gall like growths bring crown gall (Agrobacterium tumefaciens) to mind, however aerial crown gall (caused by pruning loppers that have contacted A. tumefaciens infested soil) would not have caused such wide-spread damage. Quickly realizing that I was out of my element, I texted photos and made a call to Janine Hasey (UCCE Farm Advisor Sutter, Yuba, Colusa), who upon seeing the photos immediately suspected 2,4-D damage. The systemically active herbicide kills broad-leaf weeds by causing uncontrolled plant growth through the mimicking of the plant growth regulator auxin. Dr. Brad Hanson (UCCE Weed Specialist at UC Davis) agreed that 2,4-D damage was the most likely culprit when I spoke with him the following day.

The UC IPM herbicide description for 2,4-D in walnut has the following warning:

“Comments: Selective control of most annual broadleaf species and control or suppression of perennial broadleaf weeds. May be used as a broadcast treatment to middles or banded within the tree row. Use caution to avoid contact with tree fruit, foliage, stems, lower limbs, and exposed roots. Do not use on sandy or shallow soils and do not apply immediately before an irrigation.” 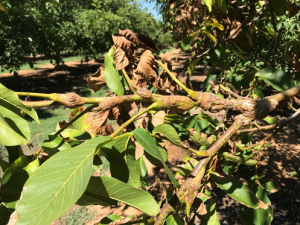 The PCA confirmed that 2,4-D had indeed been applied in the spring. One possibility is that the spray operator could have stopped (broken down, taken a break, etc.) at the tree, delivering a high dose of the herbicide to the foliage or soil (root uptake). Why this single tree in the middle of an orchard was so severely damaged remains a mystery. I suggested not removing the tree since much of the tree remained healthy, and the tree may recover in subsequent years. This case serves as a stark reminder to use paramount caution when using systemic herbicides in tree crops. Perhaps walnut growers should avoid applying trunk to trunk 2,4-D sprays after leaf-out.

Special thanks to Janine Hasey (UCCE Farm Advisor Sutter, Yuba, Colusa) and Brad Hanson (UCCE Weed Specialist at UC Davis) for bringing to bear their wealth of experience and expertise in diagnosing this farm call.