A sudden autumn freeze event last November is the likely cause of widespread dieback observed in both young and mature orchards in the Sacramento and northern San Joaquin Valleys this spring. Following reports in April of walnut orchards not leafing out, our initial diagnosis was freeze damage. We advisors, specialists, and faculty agree that this initial diagnosis has been further supported after examining additional orchards and weather station sites.

Photo 1 & 2. Very little leaf out in this part of a Gridley, CA Chandler orchard on April 22nd (photo 1). Significant canopy development in the same orchard by May 30th (photos: Luke Milliron).

Why was the damage so severe in mature orchards?

The severe damage seen in young vigorous orchards is not unexpected with a sudden autumn freeze like we had last November. What we are still perplexed about is why we saw so much damage in mature orchards from this cold event. We also don’t know all the contributing factors that led to the severity of cold injury damage in some orchards. We believe one orchard specific factor that in many cases helps explain why some orchards were affected and others were not is moisture at the top of the soil profile preceding the freezing conditions (photos 9 and 10 caption). Sharp swings in daily temperatures throughout the valley from relatively warm daytime temperatures to below freezing also helps explain the severe damage we are seeing.

The swing from daytime to nighttime temperature extremes may help explain the severe damage, according to UC Davis plant physiologist Dr. Maciej Zwieniecki. The daytime temperatures the week preceding the cold nights were in the mid 70°- 80° F range at the Verona CIMIS weather station. During these warm daytime temperatures, limbs contain starch, which does not provide protection from freezing. Slow cooling is needed to promote starch degradation into sugars, which protect against ice formation in cells. Our last November autumn freeze was a fast cooling event with temperatures at times dropping 5 degrees per hour that interfered with starch being degraded into sugars, leaving trees more susceptible to cold injury.

Photo 3 & 4. Two trees with very little leaf out at the edge of a Chandler orchard northwest of Chico, CA on April 22nd (photo 3). Significant canopy development (photo 4) of the same two trees on May 31st (Photos: Luke Milliron)

The daytime/nighttime temperature extremes likely contributed to the severity of cold injury seen. According to UCCE Walnut Specialist Dr. Bruce Lampinen, bud temperatures at night can run 5.4-10.8° F colder than air temperature when there are clear skies and about the same amount warmer than air temperature on warm, sunny winter days. Across much of the Central Valley, skies were not clear but smoky during this period due to the Camp Fire in Paradise, CA that coincided with the freeze event in November. Unlike cloud cover or fog however, smoke does not mitigate against the extreme temperature swings experienced by the buds. Most CIMIS weather stations were at or slightly below freezing with daytime highs above 60° F during the November 11-20 period, so bud temperatures were likely colder at night and warmer during the day than ambient air temperatures.

Damage in late April & Recovery as of late May:

In mid- to late- April, we began receiving calls about large swaths of walnut orchards that were only partially leafing out. The severity of partial leaf out was highly variable across these orchard blocks. While young orchards often showed the classic signs of sudden autumn freeze damage (characteristic brown freeze damaged tissue next to green healthy tissue), mature orchards had a more unusual pattern of twigs on the symptomatic wood with a shriveled and desiccated appearance although tissue was still green/living at the time. Although orchards with affected trees appeared to have dead limbs or canopies, we cautioned growers that adventitious buds (photo 7) were breaking dormancy and may allow for the development of new canopies. See this article for our full description and photos of damage in late April.

In late May, we revisited many of the same orchards that we had been called out to a month before (photos 1, 3, and 5). The previously mentioned adventitious buds held in reserve on tree limbs and trunks allowed for regrowth following dieback from the cold injury as seen in late May in photos 2, 4, and 6. These adventitious buds are continuing to break (photo 8).

Photos 5 & 6. Clusters of severely affected trees that did not leaf out on April 22nd (photo 5). Substantial canopy growth from the lower/central portion (photo 6) of most of the affected trees in this orchard on May 31st (photos: Luke Milliron).

Photo 7 & 8. On otherwise blank branches, some adventitious buds were beginning to push on this Howard tree on April 19 (photo 7, by Janine Hasey). These adventitious buds have continued to break (photo 8) much more recently (photo May 31st, by Luke Milliron).

The information below is what we have learned from previous freeze events and is provided if you conclude your walnut orchard has freeze damage. 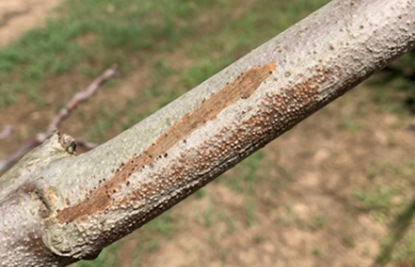