Along with setting a decent prune crop begins the important work of supporting current crop growth and canopy health and return bloom for future production. Adequate orchard nutrition is critical to both these goals. Special care in soil and nutrient management should be taken to maintain profitable crop development and canopy health.

Saturated/wet, cold soils slow root activity. All nutrients absorbed from the soil are absorbed from the soil solution, so some soil moisture is necessary for nutrient uptake. But too much soil water interferes with nutrient uptake, as oxygen is rapidly depleted in saturated soil by plant root and microbe activity and “restocking” of soil oxygen from above ground atmosphere is blocked by water-filled soil pores. Wet soils are also slow to warm, and warmer soils mean warmer roots. Active biological processes move faster in warm compared to cool soils.

Inputs of three essential mineral nutrients are needed in most prune orchards in most years – nitrogen (N), potassium (K) and zinc (Zn). In wet springs, tree N, K, and Zn availability may be limited by cold, saturated soils. Iron (Fe) and, occasionally, manganese (Mn) availability can also be limited under those conditions. Before getting into specifics about how this spring may impact N, K and Zn management, let’s review some basics regarding these key elements.

In a wet spring with a good to heavy crop in many orchards, consider the following suggestions: 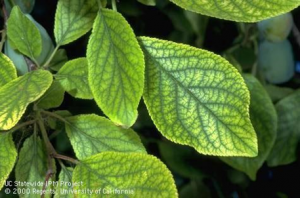