Adapted from “Soil testing and analysis: what to expect in the report” by Allan Fulton, Farm Advisor, Tehama, Glenn, Colusa, and Shasta Counties and Dirk Holstege, Director Analytical Laboratory, University of California Davis Agriculture and Natural Resources in the May 2009 Sacramento Valley Walnut News.

Agricultural laboratories usually analyze and report soil salinity and fertility levels in the same report. Saturation percentage, electrical conductivity, sodium, calcium, magnesium, chloride, bicarbonate and carbonate, sulfate, and boron are all factors related to salinity. Indices such as the Sodium Adsorption Ratio (SAR) and Exchangeable Sodium Percentage (ESP) are calculated from these basic measurements of soil salinity and included in the report.

Specific ion toxicity involves the accumulation of sodium, chloride, or boron in soils to high enough levels to damage plant processes and tissues. Toxicity symptoms include marginal or interveinal leaf tissue death. Soils that develop slow water infiltration and permeability rates are sometimes related to low levels of electrical conductivity and calcium, and high levels of sodium or magnesium.

Fertility focuses on essential plant nutrients, which is evaluated based upon soil pH and proper quantities of nitrogen, phosphorus, potassium, zinc, iron, manganese, copper, and molybdenum in the soil for growth and development. While calcium, magnesium, boron, and chloride are important to diagnose salinity, they are also important for nutrient deficiency, sufficiency, and balances.

Salts and nutrients exist in soils as three forms (see schematic) and this is reflected in soil test reports. Bulk minerals and organic reserves release salts and nutrients very slowly and contribute only in a minor way to the quantity or intensity of soil salinity or fertility, so common soil tests do not measure either. However, the two play an important role in buffering soil salinity and fertility. 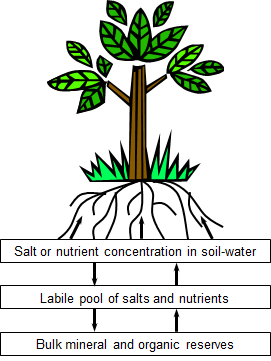 Labile forms of salts and nutrients are unstable and constantly seeking equilibrium with the salts and nutrients in the soil-water and to a lesser extent with the bulk mineral and organic reserves. Laboratories generally measure labile forms of nitrate-nitrogen, orthophosphates, and potassium in soils to determine the amount available to the plants. They will show on the soil test report in “milligrams per killogram soil (mg/kg)”.

Many, but not all, laboratories measure and report salts in the labile form, describing salts as “exchangeable”, “extractable”, “cation exchange capacity”, reporting in “milliequivalents per 100 grams of soil (meq/100 gm)”. Some laboratories prefer to only measure and report salts in the saturated paste extract rather than exchangeable forms, unless specifically requested by the customer.

Nearly all laboratories measure salinity (sodium, calcium, magnesium, chloride, bicarbonate and carbonate, sulfate, and boron) in a saturated paste extract. The extract represents the soil-water at a very high soil moisture content along with the dissolved salts and nutrients that are readily available to the tree. Crop salinity tolerance numbers are based upon correlations between crop development, yield and salinity levels in the extract. The water content of the saturated paste (saturation percentage) is sucked from the paste, measured and reported to understand the dilution effect of the saturated soil and to enable the test results to be related to lower soil moisture levels that typically occur in orchard soils.

Salinity measurements of the saturated soil extract are often labeled on reports as “water-soluble” and reported as “milliequivalents per liter”. The soil pH reported is commonly measured in the saturated paste prior to vacuum extracting water. Nutrients such as nitrate-nitrogen, phosphorus, and potassium may not be reported in the water-soluble forms because determinations of these nutrients in labile forms are more meaningful to evaluate soil fertility.