A wet winter is when having an orchard planted on a deep, well-drained soil, or planting on berms, islands, or mounds can pay off. Some orchards on soils that are not well-drained or have been flooded can face difficulties when their root zones are saturated. Orchards planted in low areas or on heavy textured soils are the most affected. Maintaining drains and keeping ditches clear is most important when facing these difficult conditions. The water level standing in a ditch will be at the same level or higher in the soil profile in the adjacent orchard.

Tree roots require oxygen for respiration. Respiration fuels growth and energy reactions leading to water and nutrient uptake. During cool winter conditions trees can withstand longer periods of saturation since respiration rates are lower when trees are dormant. Flowing water is less damaging than standing water most likely due to greater amounts of dissolved oxygen. Reduced root activity and nutrient uptake can produce pale leaf color or interveinal chlorosis. When tree roots are surrounded by saturated soil they can die from lack of oxygen even without any major pathogens present. This may be a transient problem in some cases, affecting only small feeder roots followed by tree recovery as new feeder roots grow out of the problem. In more severe cases, larger roots die and trees begin a gradual decline producing small, off color leaves, little new growth with a thinning canopy, display leaf burning, wilting and defoliation, followed by tree death.

Waterlogging also provides ideal conditions for the development of Phytophthora water molds. These pathogens are stimulated under saturated conditions to produce swimming spores (zoospores) which orient towards root exudates. These compounds include amino acids, organic acids and simple sugars, as well as polysaccharides, proteins and organic substances. Zoospores may have greater difficulty orienting toward tree roots, crowns, or trunks and penetrating when water is flowing. Flooded conditions are favorable because Phytophthora can propagate more rapidly and spores are moved about by water.

Phytophthora is often thought of as a root disease, but in years where there is standing water above the soil line, it can infect up to the depth of standing flood water. Once zoospores penetrate the bark under saturated or flooded conditions, they germinate; causing root, crown, or aerial infections that kill roots, scaffolds, or the entire tree. Phytophthora species are known to be present in flooded areas and in orchards irrigated by surface water. 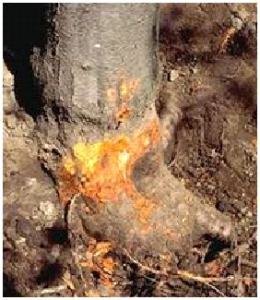 Young trees are more vulnerable because their bark is thinner and more easily penetrated, and they are smaller and more easily girdled and killed. As temperatures warm, young trees are at greatest risk if they are actively growing and are faced with standing in stagnant flood water or are on soils whose profile remains saturated. You may also observe differences in susceptibility between varieties on the same rootstock. Aldrich on Lovell rootstock can die from crown rot when Nonpareil rows in the same orchard are less affected. Young Price trees may develop more aerial Phytophthora cankers than adjacent Nonpareil rows. 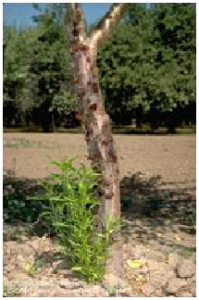 Aerial trunk or limb cankers occur at the depth of flooding or around pruning wounds. They are most likely caused by P. syringae, a cold weather species. Photo: UC IPM.

Once tree root systems are injured by extended periods of saturated soil, it’s easy for weak areas to be overwatered when irrigating since a compromised root system results in lower water uptake. Over-irrigation then compounds the problem making it difficult to overcome. Such trees can stress easily between normal irrigations, and may display lower limb dieback. The severity of these problems will become apparent when temperatures heat up later this spring. Reducing nozzle/emitter sizes in weak areas in an orchard may help mitigate over-irrigation.

If root system health is compromised, it’s important to limit irrigation sets to 24 hours or less to avoid further root system stress. In addition to keeping ditches and drains clear, allowing orchard weeds to grow taller in the middles will increase water use helping to extract excess water from the soil. Phosphonate spray applications provide some protection from Phytophthora infections but are ineffective in combating waterlogging.