Pocket gophers cause problems in many crops in California. Gophers spend their lives underground in tunnel systems where they can feed on tree roots and vegetation at the edge of an open burrow. Most feeding takes place at a depth between 8 and 16 inches, although their burrows can be as deep as 3 to 4 feet. Gophers live alone within their burrow system except during breeding season, producing offspring in the spring and fall. They push up soil and come to the surface to cross barriers or move to a new area.

Spring is the best time to control gophers since gopher activity heightens as the soil warms up and their population can be reduced before they start reproducing. Horseshoe shaped mounds of soil with a side hole plugged with soil indicate gopher activity near the surface.

There are several control measures available to manage gopher populations; however, using an integrated approach with two methods – traps and bait — is most reliable.

It is essential to accurately locate the gopher’s main burrow with the help of a probe. A gopher probe can be constructed from a PVC pipe or metal rod, or it can be purchased commercially. An enlarged tip that is wider than the shaft of the probe is an important feature for locating burrows. First, locate a fresh mound of soil, which indicates recent gopher activity. It is important to find the main burrow as gophers may not revisit lateral tunnels; therefore, placing traps and baits in them would not be effective. The main burrow can be found by probing 8 to 12 inches from the plug side of the soil mound. When the probe enters the burrow, there is a 2-inch gap in resistance to probe movement. 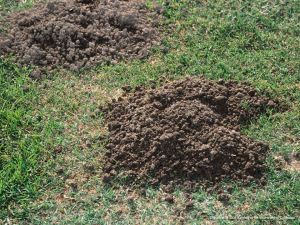 Several types of gopher traps are available; the most common type is a two-pronged, pincher trap (Macabee, Cinch, Gophinator), which the gopher triggers as it pushes against a flat, vertical pan. Another popular type is the choker-style box trap. Although they vary in design and method of placement, they are all effective.

These traps are set in main tunnels near fresh mound activity. Two traps are set 12 – 18 inches into the main runway in opposite directions to ensure interception from either side of the burrow. The traps are tied to a locating stake and the hole is covered to exclude all light.

It isn’t necessary to bait traps, however, you may increase your chances of capture by placing lettuce, carrots, apples, alfalfa or peanut butter as bait.

Check the traps often and if capture doesn’t take place in two days, replace traps. Since there is usually only one pocket gopher in each tunnel system, traps should be set at new locations after a gopher is trapped. Exceptions include breeding season or when a young gopher is caught, since other juveniles may be in the same burrow.

Find the main burrow using a gopher probe as described above. The main types of effective poison baits are: strychnine saturated grain, and anticoagulants that are used for other rodents and vertebrate pests as well.

Strychnine is a very effective and fast acting chemical after a single feeding. Since its decomposition rate in moist soil is high, it offers reduced control for re-invaders moving into the same burrow system. Place the bait in the main burrow and close the hole with rocks or materials that block the light and prevent soil from falling into bait. Deposit a few chemical baits within the same tunnel system. This will increase the success rate. If you detect new soil mounds, reapply baits in two days.

Anticoagulants are also placed in the main burrow. The advantage to this chemical is that it is available for multiple feedings and can kill more than one gopher at a time as long as bait is available. The amount of bait used is significantly higher (10 times) than use of strychnine. These baits are less effective than strychnine but they are also less toxic.

For use of chemical baits, always check the label and if you have questions, ask your local Agricultural Commissioner’s Office.