Verticillium wilt symptoms show up in orchards in the late spring when the weather changes from cool to hot. The most visual symptom is dry yellow/brown leaves still hanging from one or two scaffolds of a young tree. At first look this disease gives the appearance of killing the trees but few trees are actually killed. The collapsed scaffolds often leaf out later in the year with the only loss being the tender tips of scaffolds that are too desiccated to regrow. Affected trees can have reduced yields in subsequent years mainly due to smaller tree size. 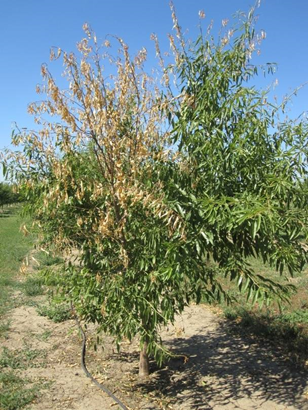 Verticillium wilt (Vert) is caused by the soil borne fungus Verticillium dahliae. The fungus can be found in bare soil as microsclerotia or in plant debris that remains in the field. Microsclerotia can staying quiescent for years until roots of a host plant are nearby. When a host plant is near, the fungus infects the roots and grows in the xylem of the plant. The xylem becomes plugged, making it nonfunctional for water transport, causing the plant to wilt. Cool, wet springs are favorable for Verticillium growth. Growth is slowed or terminated by the hot dry summer conditions allowing affected scaffolds to recover. In following years, re-infection can occur from new root infections or surviving fungus within the tree’s roots and wood.

Many plants are hosts for verticillium including all of the Prunus tree species, many row crops commonly grown in California (tomatoes, melons, potatoes, safflower, strawberry, eggplant, cotton) and many weed species (nightshade, groundsel, lambsquarters, dandelion, pigweed). Verticillium microsclerotia numbers can increase up to 60 per gram of soil where host plants have been grown. Yet, the disease can be a problem in new orchards planted where only 2-3 microsclerotia per gram of soil are found. The majority of the microsclerotia are found in the top layer of soil.

Almonds are most susceptible to the disease from 1-5 years of age with most of the disease showing in the 2nd to 4th years.  The following symptoms will help diagnose the disease. 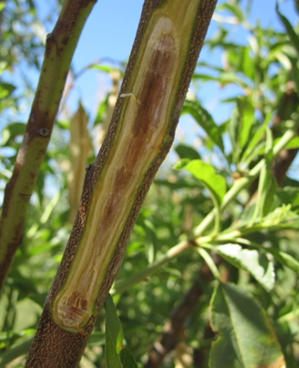 What To Do After Verticillium Strikes

When you find verticillium affected trees the current recommendation is to be patient and not prune prematurely. The summer heat will slow the growth of the fungus and allow the tree to push new growth from the surviving tissue. Do not prune out dead wood until you can tell how much of the tree will have made a full recovery. Often you’ll find that only the tips of affected scaffolds have died. In 1st and 2nd leaf orchards, in extreme cases some trees may die and will need to be replaced. 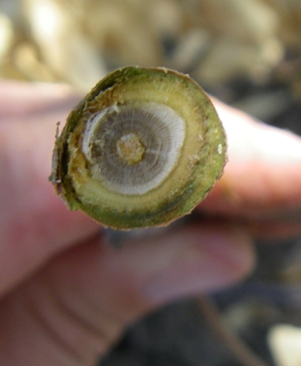 How to Avoid or Minimize the Disease