(If you missed it, go read Part 1 of this series).

What are the water requirements for some of the main summer crops grown in our area?
Water is essential for crop production. Crops consume water through a process called “evapotranspiration” (ET). ET is the combined process of transpiration from plant surfaces and evaporation from soil surfaces. As plants function, soil moisture from rainfall or irrigation is converted to water vapor where it returns to the atmosphere as part of the larger hydrologic cycle that occurs around us.

During the irrigation season, most of that water is transpired through the leaves while some is lost through evaporation from the soil surface or used by vegetation growing between trees. Usually only a small fraction (< 10 percent) of the water that is consumed for crop production in the summer is evaporated. Water evaporates when the irrigation system is in operation and from the wet soil surface shortly after rainfall or irrigation. Evaporation declines to low levels after the water infiltrates into the soil and as the surface soil dries out. Shading from trees can also reduce evaporation. A much larger portion of the water that is consumed for crop production is by plant transpiration where water is absorbed from the soil through plant roots and then moves up through the plant and is vaporized out through specialized plant cells called stomata. Only a small portion of water is actually stored in the plant.

Seasonal weather conditions primarily drive the rate of crop evapotranspiration. ET will be higher on long, hot, and windy summer days than shorter, cooler, and calm spring or fall days. Plant transpiration enables the crop to cool itself, grow, and function during the hot days similarly to how our bodies cool by sweating (perspiration) when we are active in the outdoor heat. As plants transpire water, they grow, intercept light, and carbon dioxide (CO2) enters the leaf pores (stomata). Energy from the sun and CO2 are the basic building blocks that plants convert to natural sugars or carbohydrates through the process of photosynthesis. These sugars and carbohydrates are eventually converted to proteins, amino acids, vitamins, and other healthy attributes found in the produce. When most commercial crops are not adequately supplied with water they typically respond by producing less crop 7 and often inferior crop quality. Attributes such as small size, sunburned, shriveled, off-colored, and poorly flavored produce are often caused by not supplying enough water. This produce often does not satisfy consumer demands. Regulated Deficit Irrigation (RDI), where water is purposefully withheld or reduced at specific crop development stages, can be used in some cropping systems to manipulate quality. One example might be when water is reduced after berry softening in grapes grown for wine to improve wine quality.

Water consumption or ET by crops grown in our area range from about 2.0 to 4.5 acre-feet per acre (see table below). In different terms, seasonal water consumption can range from about 600,000 to 1.4 million gallons of water per acre and emphasizes the fact that a great deal of water is necessary to support plant photosynthesis and grow productive and good quality crops. On a hot summer day, one tree depending on tree size, can consume 70 to 110 gallons of water per day. Length of the growing season and size and shape of the canopy have a large influence on crop water consumption. As the crop canopy enlarges to intercept more sunlight and take in more CO2, there is increased transpiration surface and more water can be moved through the plant (more ET). 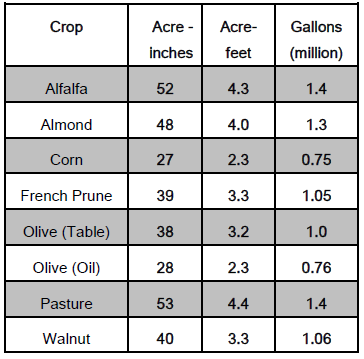 Approximate annual levels of crop water consumption (ET) per acre for some of the primary summer crops grown in the northern Sacramento Valley.

Crop quality, goals and standards will influence water application. For example, large table olives are favored by consumers and will earn a premium price, however, olive size is sensitive to water stress. In contrast, olives grown for oil are crushed for oil extraction so olive size is not as critical of a quality characteristic. Also, higher oil content and quality (flavor, pungency, etc…) is valued and can be achieved by withholding irrigation water. As a result, water consumption by table olives is higher than olives grown for oil.

It is important to recognize that crop water consumption or ET is not the same as the irrigation requirement. Irrigation requirement will typically be less than ET. Irrigation requirement depends on the specific field setting such as amount of rainfall received, soil type and its capacity to retain water, rooting depth of the crop, the influence of rivers and streams on water table conditions, and soil salinity. In the northern Sacramento Valley where rainfall is relatively higher than other parts of the Central Valley, usually, 15 to 35 percent of the seasonal crop water consumption can be provided by spring rainfall that occurs as the crop is growing, winter rainfall that was stored in the soil profile when the crop was dormant or when rainfall exceeded ET, and in some settings capillary rise of water from a shallow water table which can be influenced by nearby rivers and streams. Leaching fraction to manage soil salinity is usually achieved by the higher rainfall as well.

When the contribution of rainfall and other potential sources of water are considered, most of the crops grown locally will require between about 1.5 and 3.5 acre-feet of irrigation water per acre annually or 500,000 to 1.2 million gallons of water per acre annually. These levels of crop irrigation can be related to a 2010 report from the California Home Building Foundation, where a new 3 bedroom single family home with four occupants on a 4000 square foot lot is modeled to use 174,000 gallons of water annually for both in home and landscaping. In this model, landscape irrigation accounted for 57 percent of this water use and was highlighted for potential to reduce in the future with conservation. So for added context, the annual irrigation water applied per acre for the primary summer crops grown in our area is approximately equal to the annual water consumed by 3 to 7 single family homes with each home built on 4000 square foot lots.

The surveys show a significant reduction of about 42,000 acres in farmland that was once irrigated with furrow systems. This reflects a reduction in row crops such as cotton, vegetables, and seed crops and that subsurface drip irrigation has become a widely used irrigation method in processing tomatoes. Basin flood irrigation methods have also declined almost 25,000 acres over the period. This reflects conversions of orchards that were previously flood irrigated and a reduction of other field crops that were irrigated with basin flood systems. These lands are now principally irrigated with surface drip, micro sprinkler, solid set sprinkler or buried drip irrigation. 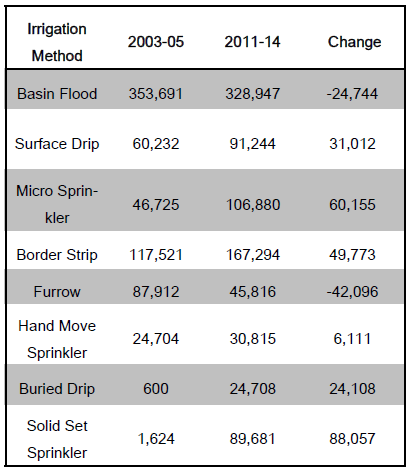 How does drip and micro sprinkler irrigation work?
Usually, a pump lifts and pressurizes groundwater or pressurizes surface water when available, filters clean the water, and pressure regulators, plastic pipe, tubing, and drip emitters or micro sprinklers distribute the water throughout an orchard or field to apply it precisely near each tree or plant. These pressurized systems have replaced applying the water in a border strip or furrow which relies on the soil properties to determine how uniformly and efficiently an orchard or field is irrigated. When maintained and managed optimally, these irrigation methods prevent irrigation water and nutrients in the water from leaching past the crop root zone to protect groundwater quality but result in little to no groundwater recharge.

Wetting patterns can be managed efficiently by choosing emitter placements, sprinkler spray patterns, or using stream splitters to keep the tree trunks dry to reduce the risk of crown and root diseases. In the case of row crops such as processing tomato where subsurface drip is often used, less of the soil surface of the planting bed is saturated by irrigation so the developing and ripening fruit are less exposed to molds and mildews that cause crop loss. In addition, with less soil surface being wetted, less evaporation occurs and more applied water is available to the crop. More and better quality produce is grown per gallon of irrigation water applied and groundwater quality is protected when using buried drip effectively. Buried drip is being used in orchard crops on a limited basis because of practical concerns. For further information on this topic refer to the article Subsurface Drip Irrigation in California – Here to Stay?

The water application rates of these systems depends upon the choice of irrigation system components and their layout but they are typically engineered to apply water at low rates. A single line drip system may apply water at a rate as low as 0.02 inch per hour and a partial coverage micro-sprinkler or full coverage mini sprinkler system might apply water at a rate as high as about 0.10 inch per hour. Because of these low and precise water application rates, these irrigation systems will run frequently and for longer durations. A single line drip irrigation system may run as much as 70 to 90 hours per week and a partial or full coverage mini sprinkler system may run 18 to 30 hours a week during the hottest weeks of summer. Decisions on when and how long to irrigate are often assisted by using real-time weather information to predict crop water consumption (ET), soil moisture sensors to keep track of soil moisture levels, and crop stress indicators to foresee potential problems.

In California during dry winters such as 2014/15, when rainfall was insufficient to refill the soil profile of deeper rooted orchard crops, these low volume systems are sometime operated to partially refill the soil profile in the late winter (February/March), when it becomes more certain that rainfall is going to be low for the season. This may appear counter-intuitive to conserving water during drought, however, what is happening is that efforts are being made to partially restore moisture in the soil profile of the deeper rooted crops. This bank of soil moisture will lessen the intensity of irrigation needed later in the spring and summer when the overall demand for groundwater is higher and it helps sustain crop production and quality. 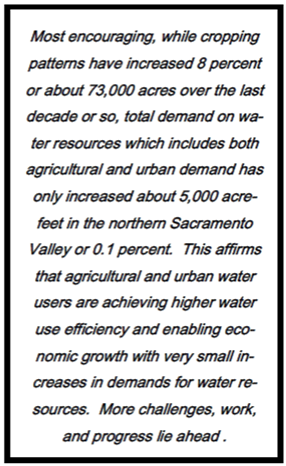 Highlights from the Past and Encouragement for the Future.

Over the past decade or slightly longer, agriculturalists in the northern Sacramento Valley (and California) have endured several dry and critically dry hydrologic years and overall this period will be remembered for drought. At the same time, cropping patterns have changed in the northern Sacramento Valley. Total irrigated acreage has increased about 73,000 acres or 8 percent with a shift to permanent tree nut and fruit crops. This shift has been driven by growing populations with preferences for healthier foods and made possible because the climate, soils, and water resources of the northern Sacramento Valley are well suited to grow them. Nut and fruit prices have also been relatively strong providing incentive. Methods of irrigation have also changed from flood and furrow to drip, micro sprinkler, solid set sprinkler, and buried drip. Today, there are about 203,000 acres of land in the northern Sacramento Valley irrigated with pressurized systems that were not in place approximately a decade ago. These irrigation systems have helped achieve greater food production per unit of irrigation water or “more food per drop”, protected groundwater quality by helping to reduce leaching, but opportunity for groundwater recharge with surface water has also been reduced.