Walnut Orchards Not Leafing Out

From the northern San Joaquin Valley to the northern Sacramento Valley, walnut farmers and their consultants are reporting a widespread and alarming issue of walnut trees not leafing out this spring. UC farm advisors, specialists and professors are working together with growers and crop consultants to find out why. The initial hypothesis from researchers is that we are seeing frost damage from mid-November, however the symptoms on mature blocks are both more unusual and more severe than autumn freeze events in recent memory. 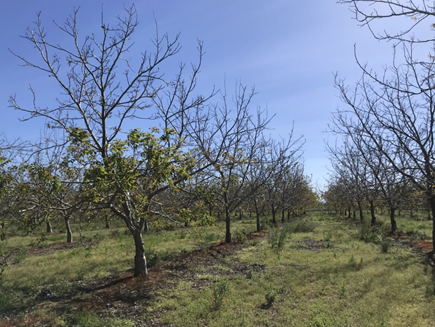 Photo 1. Variable severity of symptoms in this flood irrigated block near Gridley, CA. The tree in the front left of the photo has only leafed out low in the canopy. The trees towards the ends of these flood irrigated rows (seen in the distance) leafed out normally. Roughly two-thirds to three-quarters of the trees in this block showed symptoms (photo: Luke Milliron).

Farm advisors on the east side of the Sacramento Valley began receiving panicked calls in the third week of April from concerned PCAs and growers that large swaths of walnut orchards were only partially leafing out. Even earlier, similar calls were coming in to farm advisors in the northern San Joaquin Valley. The pattern of affected trees has been highly variable across these orchard blocks. Orchard blocks visited have had significant differences including variety, (e.g. Chandler, Howard, Solano, Gillet, Tulare, etc.), rootstock (e.g. Paradox seedling, VX211, Vlach, Black), soil type, irrigation system, and of course management (photos 1-3). Upon closer inspection, twigs on the symptomatic wood have often had a shriveled and desiccated appearance and still had green/living tissue when cut (photos 4-5). Conversely, in some orchards (especially in young blocks) that are not leafing out, cutting into branches reveals characteristic brown freeze damaged tissue next to green healthy tissue (photos 6-7). Orchards with affected trees may appear to have dead canopies, however, adventitious buds are breaking dormancy and may allow for the development of new canopies in some situations (photos 8-11). 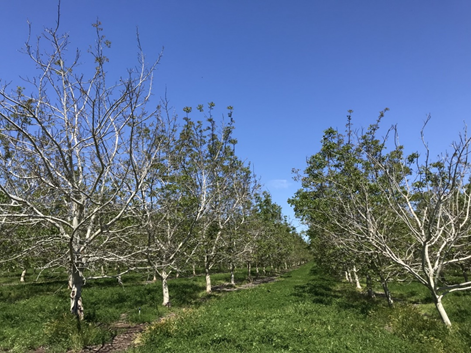 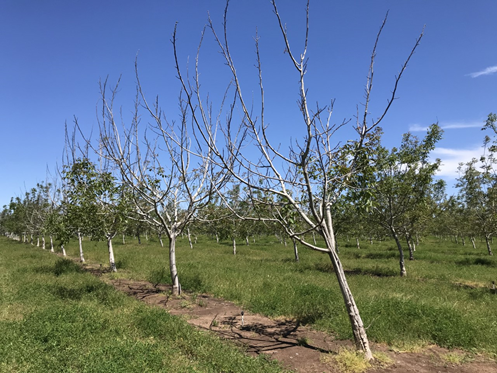 Photo 3. Highly variable severity of symptoms, with sporadic clusters of trees that did not leaf out down each row. At least one-third of the trees in the portion of the orchard depicted above showed symptoms (this orchard is to the southwest of the orchard in photo 2, photo: Luke Milliron). 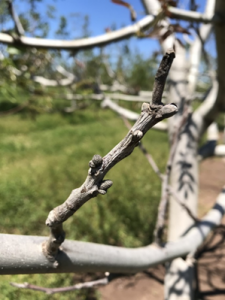 Photo 4. Much of the smaller wood on affected trees had a shriveled (desiccated), appearance (photo: Luke Milliron). Click to enlarge. 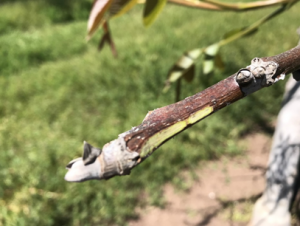 Photo 5. Generally, when you cut into the shriveled spurs and shoots, there was still green/living tissue (photo: Luke Milliron). Click to enlarge.

Coinciding with this time frame was the Butte County Camp Fire which caused extremely poor air quality in the region. Everyone was focused on dealing with the smoke issues and we didn’t realize how cold the nights were last November until this spring as trees were leafing. Some of our questions include could the smoke have had some effect, what role is tree carbohydrate status playing, and what were the predisposing factors (e.g. when were trees last irrigated before the cold event)? We believe predisposing and orchard specific factors are key given that healthy blocks are often adjacent to severely affected blocks, and within affected areas some trees appear healthy.

The information below is what we have learned from previous frost/freeze events and is provided if you conclude your walnut orchard has winter kill. 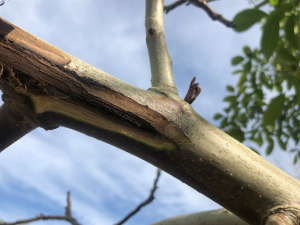 Photo 6. Characteristic brown freeze damaged tissue next to green healthy tissue in a 10-year-old tree. Many of the limbs in this orchard were still green but drying out as we have seen in many other orchards. Click to enlarge. 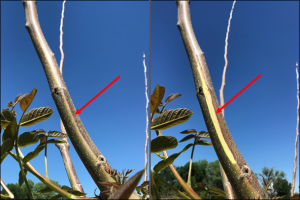 At what temperatures may you see freeze damage on mature and young walnut trees? There are many factors that will affect the cold hardiness and the temperatures a walnut tree can withstand when a freeze event occurs including hardening against low temperature, moisture level in root zone, tree age and stress level. 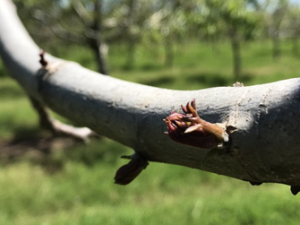 Photo 8. On otherwise blank branches, some adventitious buds are beginning to push. These buds are held in reserve on trees to allow for regrowth following dieback and other severe stressors (photo Luke Milliron). Click to enlarge. 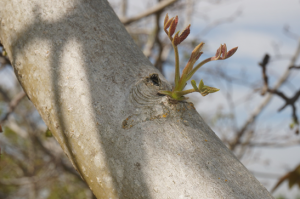 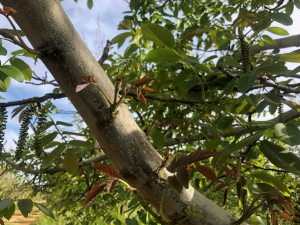