Despite the concern of high codling moth pressure due to the dry winter and warm spring and summer, the overall codling moth populations this year have been relatively quiet throughout the Central Valley. The first flight 2021 biofix dates for most of the Sacramento and North San Joaquin Valley orchards ranged from 5 April to 15 April. In the orchards where we had codling moth traps in the Modesto area, the biofix dates for the first, second, and third flights were 13 April, 14 June, and 30 July, respectively (see Figure 1). The average lengths of the first, second, and third generations were 1021, 1156, and 1280 degree-days, respectively. The peak moth activities of these flights occurred around the 3rd-4th wk of April (first flight), 3rd-4th wk of June (second flight), and the 1st wk of September (third flight). However, overall trap captures during the entire season were relatively low, including the most recent third flight (see Figure 1). Since the pest pressure has remained low so far, the potential risk of damage by codling moth is expected to be minimal. 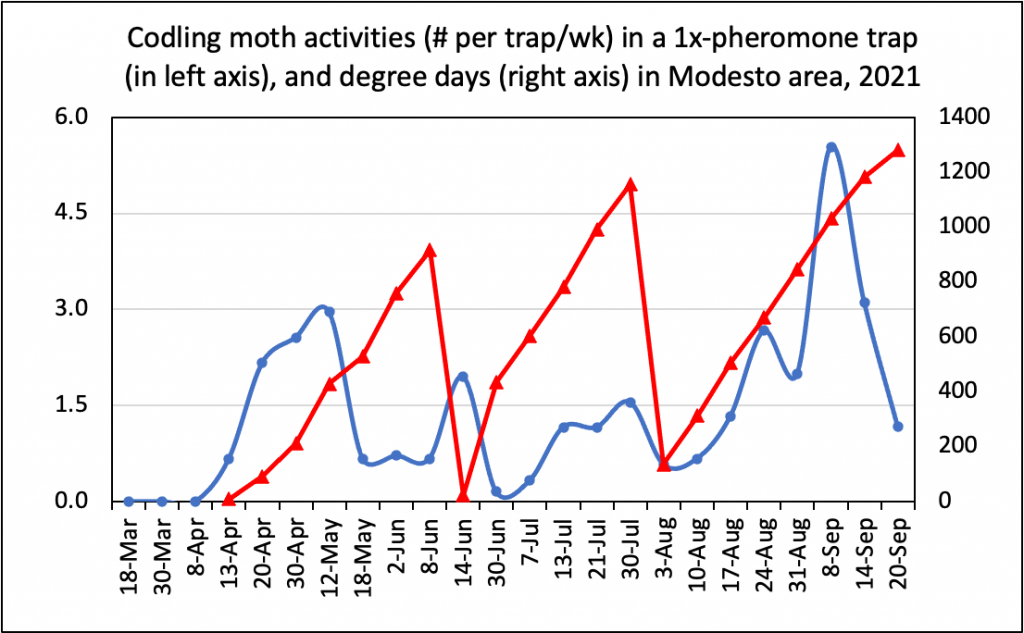 Current navel orangeworm IPM practices include 1) conducting winter sanitation to destroy ‘mummy/trash nuts’ before the spring flight; 2) minimizing other predisposing factors (i.e., blighted, sunburnt, and codling moth infested in-season nuts); 3) performing a synchronized and early harvest; 4) applying insecticides at husk-split if needed; 5) applying mating disruption products. Since navel orangeworm has multiple hosts, primarily almonds and pistachios, the pest pressure and the risk of nut damage in walnuts have increased with the increase of the host crop acreage in the Central Valley.

This year, with minimal walnut blight issues and low codling moth pressure, two important disposing factors, navel orangeworm damage to in-season nuts before husk-split, is expected to be low. Figure 2 shows the seasonal flights of navel orangeworm in Sacramento (left) and the North San Joaquin Valley (right). As we can see, the third flight moth counts (both male and female) in the traps increased steadily after mid-August. This upward trend is expected due to the increased number of moths in the third flight and the potential influx of moths from nearby orchards of multiple nut crops. The male moth counts in pheromone traps in the Stockton area (Figure 2, right side) have remained high as of mid-September data presented here. 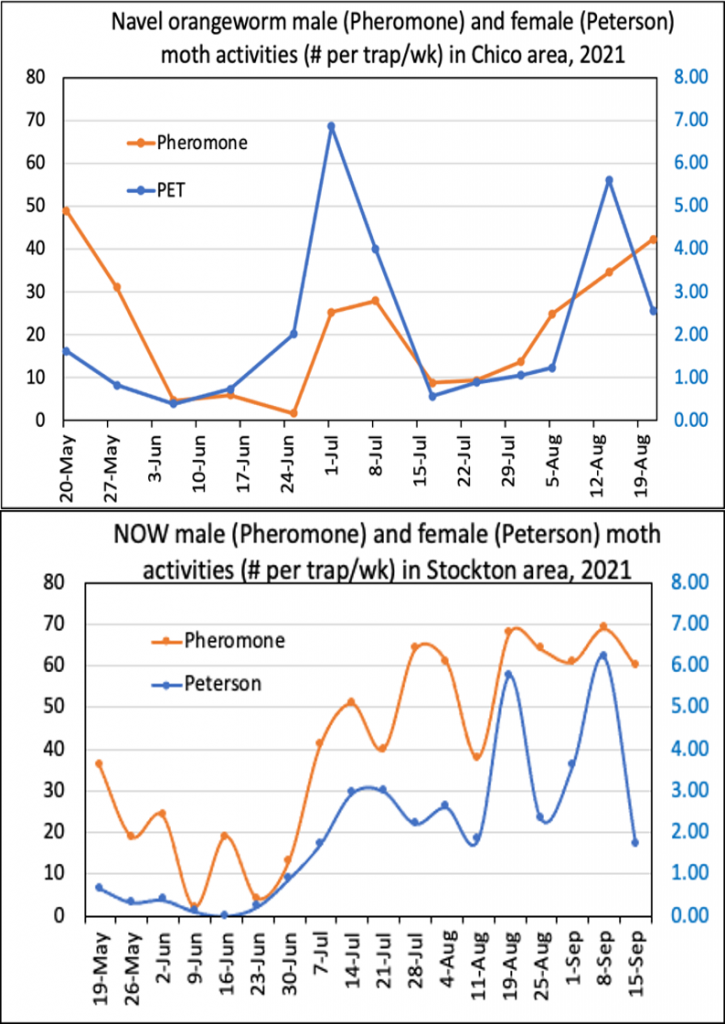 In terms of in-orchard damage risks, all walnut varieties after husk-split are susceptible to navel orangeworm, and close assessment of both nut maturity (i.e., husk-split) and moth flights (3rd – 4th) is crucial to make informed pest management decisions. For example, some early varieties like Serr or Vina may have husk-split nuts susceptible to navel orangeworm third flight that began in mid-August. Similarly, the third navel orangeworm flight (started in mid-August and continued through mid-September) can be critical in infesting Howard and some early-split Tulare varieties. While the third flight won’t damage the most common walnut variety, Chandler, which doesn’t split until the third week of September or later, the fourth flight, which usually occurs between the last week of September and the first week of October, has a greater potential to cause damage to Chandler – watch out for that flight. Timely applications of ethephon can facilitate a synchronized or early harvest to avoid additional navel orangeworm pressure to the crop.

An Emerging Pest to Look for This Fall – Flatheaded Borer.

In recent years, walnut growers have reported higher infestations of the Pacific flatheaded borer (Photo 1). This pest is not new to the Central Valley but is becoming a reemerging problem, with drought likely a  contributing factor. Flatheaded borers are known to cause damage to stressed, wounded, and sunburnt trees. However, there is a concerning trend of flatheaded borers attacking healthy trees as well. The borers damage wood from small pencil-sized twigs to 2–4-inch diameter branches, limbs, and tree trunks. 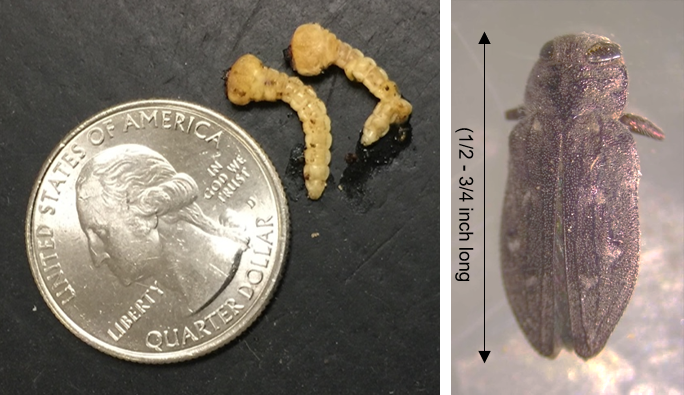 Research by the University of California is working to understand more about the lifecycle of this pest and cultural and chemical control options. Currently, there are no traps available for growers to assess populations and chemical control options. At this time, we recommend walnut growers and PCAs be aware of the lifecycle and damage the flatheaded borer can cause and be on the lookout for emerging damage in their orchards.

Flatheaded borer adult beetles deposit eggs singly in weak wood portions (i.e., sunburnt, freshly pruned, etc.), bark crevices, or depressions. Newly hatched larva bore into the bark, initially feeding on the cambium layer, but can eventually reach the heartwood by the fall. The borers remain there throughout the winter before pupating and emerging as adults the next summer. Our recent research funded by the California Walnut Board and the USDA’s National Institute of Food and Agriculture (NIFA), has found that most adult beetles emerge over three months, May through July (peak flight: mid-June), varying based on the cultivar, temperature, locations, and drought conditions. 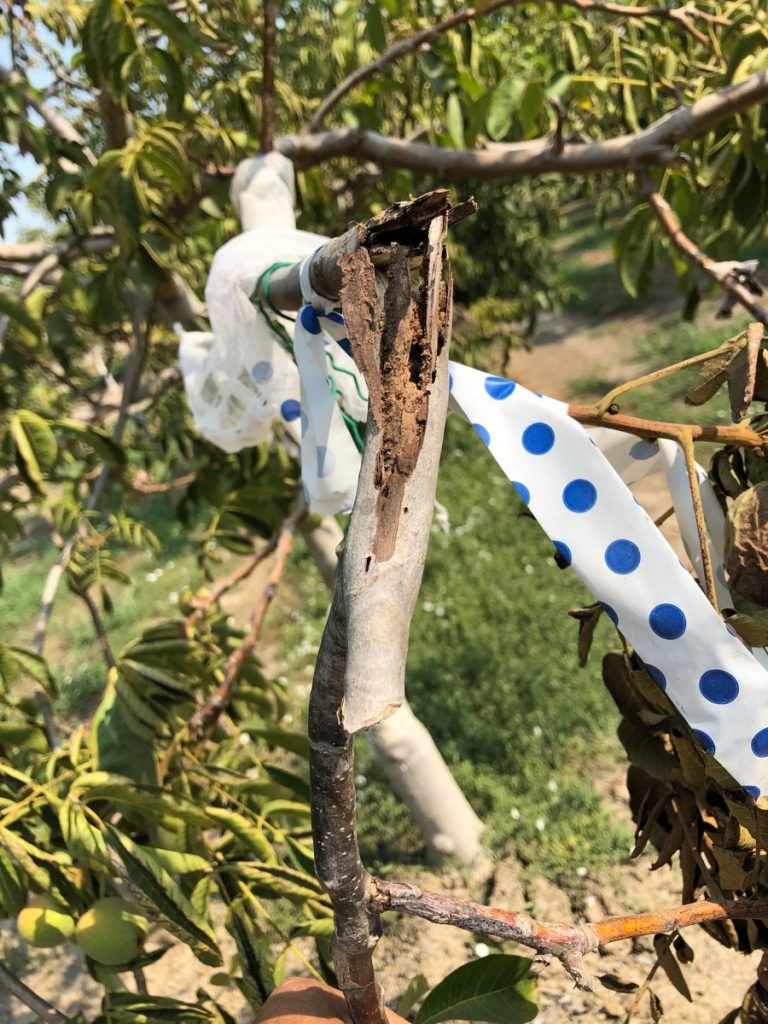 Photo 2: Flagged walnut branch due to the flatheaded borer attack 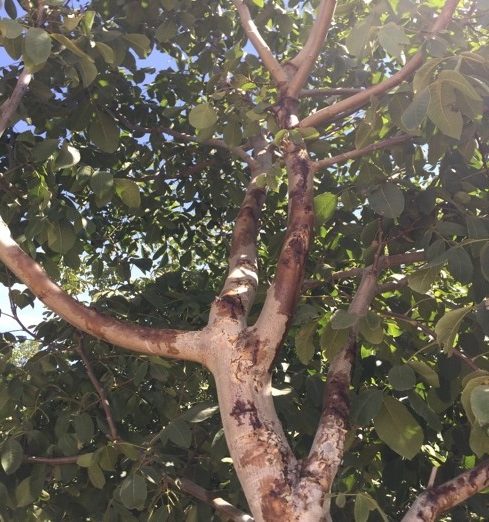 Photo 3. Brownish sap as one of the indicators of flatheaded borer infestation 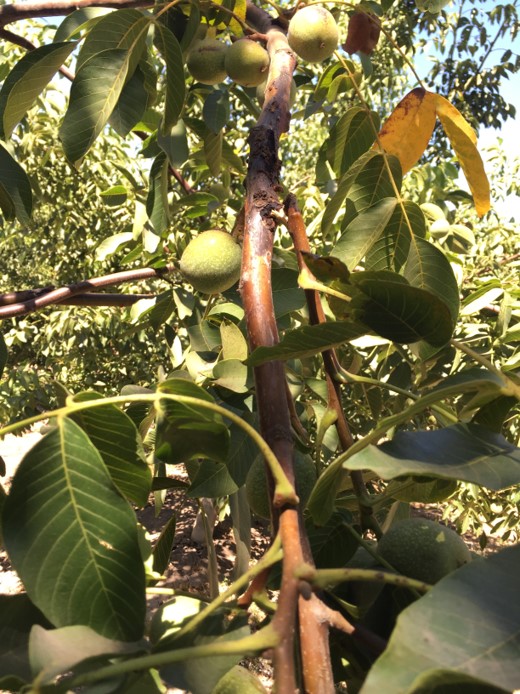 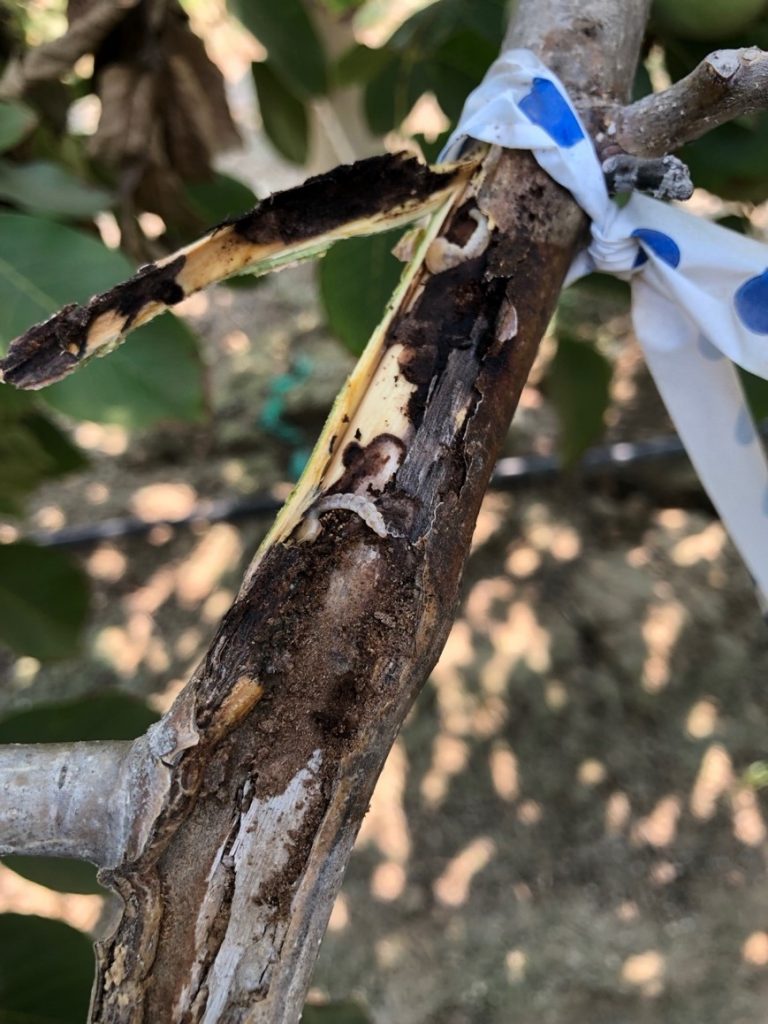 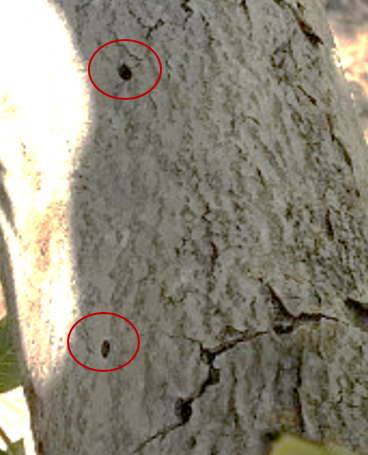 Pacific flatheaded borer infestation may be reduced by adopting cultural practices that encourage vigorous, healthy plants. However, as previously mentioned, the borer has the ability to attack healthy trees as well.

Note: We are looking for walnut orchards with flatheaded borer infestations to conduct experiments, especially in the Sacramento Valley. Please contact Jhalendra Rijal, jrijal@ucanr.edu if you are interested in becoming a cooperator on this effort.