Cold, frosty, and wet weather at bloom often results in bacterial blast, Pseudomonas syringae, killing flowers and spurs on varieties in susceptible growth stages. Another symptom is bud death leaving blank wood with few leaves on some shoots. Leaf spots, irregular leaf lesions, and marginal or leaf tip necrosis can also occur. If blast is severe it can cause significant leaf drop. Some young leaves killed by blast may adhere to the branch for the remainder of the season. 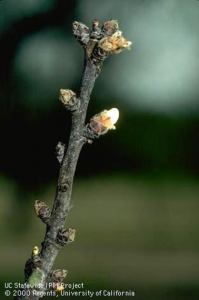 Fruiting and leafy spurs on bearing trees can be killed by blast. As the spur dies, an abscission zone sometimes forms where the spur attaches to the branch. A blasted woody spur can detach and drop off the tree when touched. Sometimes tender new shoots are blasted and blackened on one side of the stem, which results in curling or bending of the shoot as growth continues. P. syringae also causes bacterial canker, which can results in limb dieback with amber colored gumming and rough cankers in the spring. The inner bark becomes brown, fermented and sour smelling.

The distinguishing difference between bacterial blast and brown rot (Monilinia laxa) is that brown rot attacks flowers only and often has spores present on affected tissues as well as associated gumming while bacterial blast will attack both the flowers and the leaves. Twig and spur dieback occur in both diseases. Most orchards have had adequate fungicide programs in place to control brown rot. If one or two brown rot sprays were applied and damage is present, bacterial blast is more likely the culprit.

The pathogen, Pseudomonas syringae lives on all plant surfaces and is spread by splashing rain or sprinkler water. Low temperatures with moisture especially favor the disease. Bacterial blast is usually more severe in orchard areas that are prone to cold air invasion such as along the north edge of a block that receives cold wind drift or in low areas that receive cold air drainage. Trees on Marianna 2624 plum rootstock are significantly more susceptible to blast than are trees on peach rootstocks.

Frost and cold pockets are sporadic in orchards and the distribution of blast is similarly sporadic. Sometimes orchards running frost protection sprinklers have more severe blast where water hit the trees. Other orchards that didn’t run water can have severe blast as well. Usually one variety in a planting will be more severely affected than the others. There are no treatments that can effectively prevent bacterial blast.

If blast occurred in your orchard there is no action you can take to reduce the damage this year. Practice measures such as adequate fertilization and irrigation that will encourage good plant growth. Growth of new shoots from latent buds should help fill in the gaps where shoots or spurs have been killed.