There’s a new pest to keep an eye out for in almond orchards: brown marmorated stink bug (BMSB), Halyomorpha halys. BMSB has been found in urban areas in 16 counties, but has only recently been documented in California orchards – Stanislaus County peaches in 2016, Stanislaus County almonds in 2017, and in several orchards in Stanislaus and Merced Counties 2018. This pest has not yet seriously impacted many orchards and is still being studied. But it’s worth being on the look-out. Damage from BMSB is similar to leaf-footed bug damage. Below are some tips on identifying and trapping BMSB. For more on the history of the pest and on-going research, see StopBMSB.org.

Identifying the Bug: The BMSB is a marble-brown, ‘shield’ shaped stink bug about 3/4-inch-long with white bands on the antennae (its most distinguishing characteristic) and legs, alternating black and white spots on the abdomen (Photo 1). BMSB attacks more than 170 plant species, including ornamental and landscape trees, apple, peaches, pears, cherries, and several field and vegetable crops. 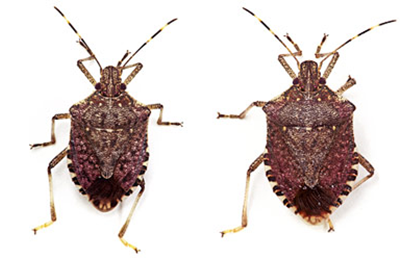 Watching for Damage: BMSB feeding can begin as early as mid-March when they start to move to the orchard and may be present in the orchard throughout the season. However, early season feeding (from fruit set to before shell hardening) seems to be severely impacted as adult feeding causes nut abortion and drop. Feeding by BMSB on developing fruits leads to the gumming nuts with multiple feeding spots within the nut. The injury can be external (multiple gumming (Photo 2A), light brown speckles, yellowing) as well as internal (pinhole (Photo 2B), water-soaked lesion, cork tissue (Photo 2C), internal gumming). In 2018 season, we observed a substantial nut drop (with feeding injury) in a few orchards in the northern San Joaquin Valley during April this year. The presence of adults and the damage have been noticeably higher in the border tree rows next to the other host trees such as ‘tree of heaven’ and potential overwintering shelters (e.g., houses, barns, wood piles). 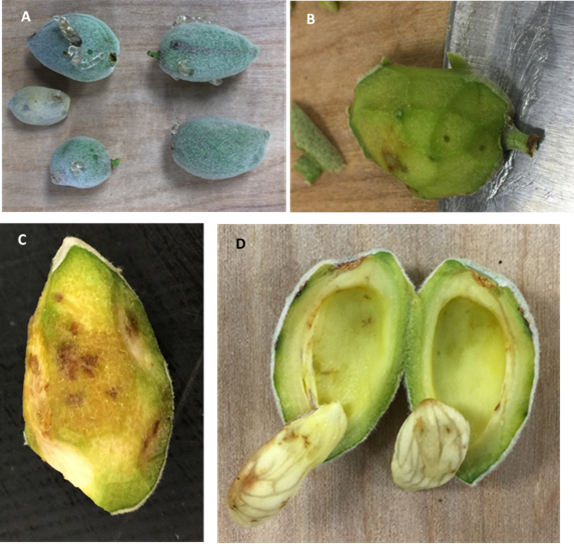 Some of the symptoms of BMSB damage resemble leaffooted and other stink bugs, but the severity and timing of damage seem to be different. BMSB damage occurs as early as mid-March and seems to continue for a few weeks to months, whereas leaffooted bug damage occurs in a point of time (around mid-April in general). Since BMSB is a landscape-based pest, BMSB can switch among different host crops within the season. BMSB are known to infest orchards in great numbers, and therefore, the degree of damage can be high compared to the leaffooted and other native stink bug damage. In terms of management, if the leaffooted bug is the problem, a one-time spray in spring is typically enough. Based on 2018 observations, management of BMSB infestations will probably require more than one sprays. We also observed multiple feeding sites (up to 13 pinholes) within the nut and multiple numbers of injured nuts in a cluster within the branch, and this BMSB feeding pattern is less common in the leaffooted bug infested nuts. Also, BMSB feeding to the nuts showed necrotic spots in the kernels (Photo 2D, above)

In harvested almonds, multiple feeding spots (in many cases, in the form of distinct necrotic spots) can be seen on the hull as well as in the shell (Photo 3A). Depending on the time and severity of the infestation, nutmeat (i.e., kernel) shows a several types of injury (shriveled to completely damaged kernel, light to severe gumming, presence of dark spots, dimpled and deformed kernel) (Photo 3B). It is important for growers and PCAs to take harvest samples and evaluate for stink bug damage. Although taking sample nuts from the tree just before shaking can be a better strategy to see all injuries especially the external gumming, it is not necessary as regular harvest sample works just fine. Hand crack the sample nuts and carefully look for the feeding signs on the hull (external and internal), and the kernels for the potential BMSB damage. 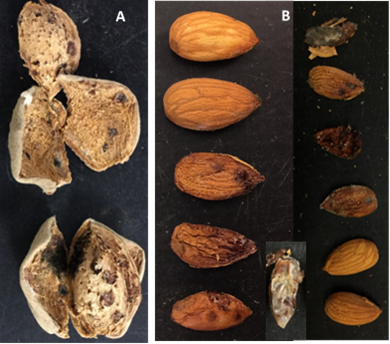 Photo 3. BMSB feeding damage to almonds showed up at harvest, A) hull and shell, B) kernel

Trapping: Commercial traps and lures which attract both nymphs and adults are available for BMSB monitoring. We recommend using the sticky panel (9 x12-inch double-sided sticky trap) that can be affixed to the top of a 5-ft long wooden stake, 1-ft of which is pounded into the ground (Photo 4). The traps should be placed in a border-tree row facing open field and/or other potential overwintering sites. In our monitoring, we captured the first BMSB in mid-March in 2017 and around the first week of April in 2018. Since BMSB damage symptoms can sometimes be confused with that related to the leaffooted bug and other stink bugs, a close orchard observation to locate alive insect is highly recommended. In addition, visual observations of the orchard for stink bug and damaged nuts is important as trap counts may not always represent the population density. The visual observation should also be focused on border trees. There are several companies produce and see the BMSB traps and lures, but the one manufactured by the Trece, Inc. seems to be the most effective based on research from other states. 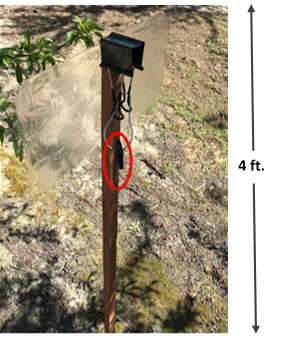