At this time, all established and thoroughly field tested almond varieties are self-incompatible, requiring pollen from a different, compatible variety for successful pollination (Table 1). Sacramento Valley weather often spreads out bloom, so having at least three different compatible varieties in an orchard may provide the best chance for setting a commercial crop. For the past 30 years almonds planting have alternating rows of a single variety. Experiments with alternating varieties down the row or increasing the Nonpareil percentage have not proven significantly better in yield or value than alternating solid rows and the arrangement is more costly to harvest.

Table 1. Pollen incompatability groups (bold headings). Varieties listed under each bold heading are not compatible with other varieties in the same group.

Select varieties with good bloom overlap for cross pollination (Table 2), pollen compatibility with other varieties in the planting, and nut maturities with sufficient separation to avoid harvesting mixed nuts (Table 3). There are no perfect varieties so consider all pros and cons for each variety before selecting those that best fit your specific location and operation.

Nonpareil, the most valuable and widely planted proven variety, is a hallmark of the California industry developed in 1879 by A.T. Hatch in Suisun. It is the standard mid-blooming earliest harvesting variety. Other varieties are generally selected for overlap with Nonpareil. Orchards are commonly planted with every other row a Nonpareil row alternating with earlier and later pollenizers to optimize the pollination potential for the Nonpareil. Popular early pollenizer choices for Nonpareil include Aldrich, Peerless and Winters. Sonora, an early pollenizer for Nonpareil, produces a valuable nut but in some years has had disappointing yield if it bloomed too early to effectively cross pollinate with Nonpareil.

Sonora produces a high quality nut and commands a price very close to Nonpareil. It blooms three to eight days before Nonpareil and can cross-pollinate Nonpareil quite well depending on bloom date. In some years, Sonora may bloom too early to be set well by Nonpareil and may have a light crop if there are no other varieties in the orchard with open flowers near the beginning of Sonora bloom. The presence of another early blooming variety can mitigate this problem. Sonora harvests right after the Nonpareil group.

Aldrich blooms just ahead of Nonpareil and is a common early pollenizer for Nonpareil in the Sacramento Valley. The tree is very upright and vigorous, can be difficult to train by pruning, and the tallest upright limbs may need to be thinned periodically to control tree height. The variety usually has a heavy bloom but often a moderate yield. Its nuts fit into the California marketing group and harvest timing is with the Butte group.

Winters blooms between Sonora and Aldrich, roughly 3 days ahead of Nonpareil and has an extended bloom that covers Nonpareil well. It is susceptible to a range of diseases similar to other early blooming varieties such as Ne Plus Ultra and Peerless. It produces a quality nut that receives a premium in certain markets and it harvests with the Carmel group. 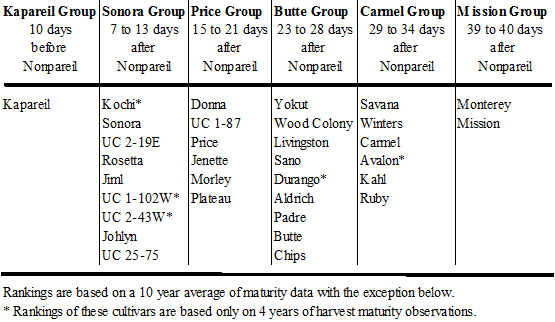 There are far more choices to select from when choosing a later blooming variety for Nonpareil pollination. Popular varieties that are frequently planted to cover the mid to later part of the Nonpareil bloom include Carmel, Fritz, Wood Colony, Butte and Monterey.

Carmel produces a high quality nut with a good shell seal. The tree is slightly smaller in size thank Nonpareil. It has a good market and is often sold as Carmel. The tree is susceptible to blossom brown rot and is especially susceptible to scab. Carmel is also sensitive to a serious genetic disorder — noninfectious bud failure or “crazy top”. This disorder results in death of terminal and lateral shoot buds which, after many years, results in the distinctive “crazy top” or “witches brooming” branching and fewer bearing spurs formed. Bud failure in 2nd through 5th leaf has the greatest impact on productivity. When identified early, trees should be aggressively replaced. Certain nursery lines have a very low incidence of bud failure. Before selecting a nursery to supply Carmel, have the nursery field representative show you established orchards of varying ages in your region. Carmel trees harvest near the end of the season just ahead of Mission and Monterey.

Monterey is an effective pollenizer for late Nonpareil bloom and is an excellent producer. It’s an old variety but until expansion of the in-shell market it was not planted much due to its high percentage of double kernels which reduced the quality and value of this nut depending on the processor. It’s susceptible to diseases much like Carmel and has experienced anthracnose outbreaks in wet years. Monterey is harvested late in the harvest season, sometimes as much as 5-6 weeks after Nonpareil, roughly with Mission. The late harvest date can be a significant problem in the Sacramento Valley when rains occur in September and early October and the large fleshy hulls of Monterey are difficult to dry.

Fritz is an excellent pollenizer for Nonpareil, blooming with or slightly after Nonpareil. It is susceptible to anthracnose in wet springs. This variety has very good yield potential, but harvests last among currently planted varieties in the state – about 45 days after Nonpareil. The late harvest date makes Fritz a very risky option for planting in the Sacramento Valley.

Butte has been used to pollinate the late Nonpareil bloom. It’s susceptible to brown rot but is a semi-hard shell variety that is resistant to navel orangeworm. It yields well, but usually commands a lower price than varieties in the Carmel or California marketing groups. Thus, use of this variety as a Nonpareil pollenizer is decreasing. Butte is mature and ready for harvest about the same time as Aldrich, just prior to Carmel but after Price.

A major issue in Sacramento Valley almond orchards is the compatibility of certain varieties with plum rootstocks (Table 4), which survive in wet, heavy soils in winter better than peach seedling or peach/almond hybrid. Nonpareil is not compatible with Marianna 2624 or M40, but appears compatible with Krymsk 86. Butte and Monterey are less compatible and are more susceptible to symptoms of union mild etch on plum rootstocks than are some varieties. When soils are too wet during the growing season, union mild etch can also be a problem on other varieties such as Peerless and Carmel on plum rootstock.

There are six primary marketing categories for California almonds (Table 5). Selling the crop at a competitive price and with a good return to the grower is paramount. Before selecting varieties for a new orchard, be sure to consult with the handler that will be marketing the crop to get their opinion on the desirability and potential returns per pound of any varieties you are considering.