Hull rot is a general term for hull infection by one of several pathogens. Infected nuts don’t shake off at harvest and must be removed by winter sanitation to eliminate future navel orangeworm (NOW) feeding sites. Often the infection of the hull results in death of the spur and attached shoot, reducing bearing surface of the tree. The list of hull rot pathogens is growing, and now includes Rhizopus, Monilinia, Aspergillus, and Phomopsis (see tables and photos below). Aspergillus infections can lead to staining of the kernel and reduction in nut quality. The most susceptible varieties commonly planted include: Nonpareil, Monterey, and Wood Colony. UC research is underway, supported by the Almond Board of California, to look at one of the new pathogens on this list — Aspergillus – as well as continuing efforts to manage Monilinia and Rhizopus hull rot infections. 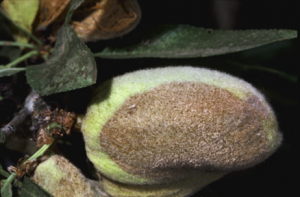 Figure 1. Hull rot caused by Monilinia causes a tan lesion on the outside of the hull. This symptom is hard to see once hulls dry.

Identification of the specific causal pathogen may help with management for the following growing season. Hull rot is traditionally caused by Monilinia and Rhizopus (Figures 1-2). Over the last 2-3 years, the pathogens Aspergillus niger and a species of Phomopsis have also been isolated from stick-tight nuts (Figure 3-4). In the case of a bad hull rot infection in 2019, it may be wise to send sticktights to a pathology lab to confirm the species involved. A summary of the symptoms and known control measures for each species are listed in Table 1. 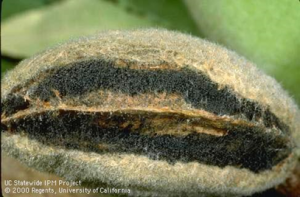 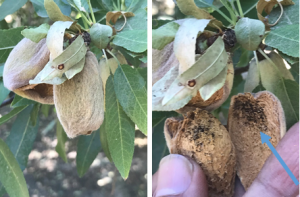 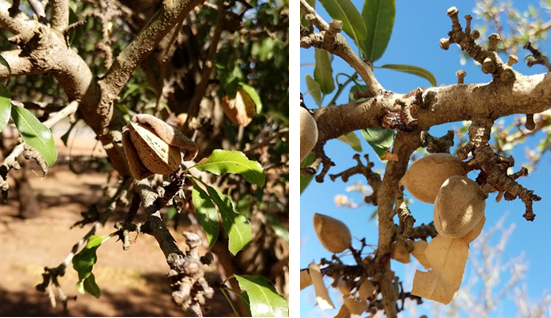 Nitrogen and irrigation management can reduce hull rot incidence. Hull rot often affects high vigor orchards. The highest incidence occurs on ‘Nonpareil’ with fewer strikes on other varieties (Table 2). Research conducted in 1990-2000 has shown that hull rot incidence can be reduced with adequate, but not excessive, nitrogen applications, and water deficit at the initiation of hull split.

Excessive nitrogen within the tree increases susceptibility to hull rot. In two long term UC studies, the more nitrogen applied, the higher the incidence of hull rot. Trees with nitrogen application rates above 250 lbs/acre were the most severely affected, and hull rot strikes were higher in low crop years. In order to reduce hull rot, nitrogen rates should be modified based upon crop load to keep the trees sufficient. Analysis of leaf nitrogen content should be conducted to determine nitrogen status. If properly sampled, the critical value for mid-summer leaf nitrogen percentage is 2.2-2.5%. Nitrogen should not be applied after kernel development is completed. This is typically in late spring, but in abnormal years, it may extend into early summer. Applications made after this point will be directed to the hull, making the hull more conducive to infection. Nitrogen applications can resume in the post harvest period. Data suggests that nitrogen source does not influence hull rot.

Stages of hull split and fungicide timing. Work by Dr. Jim Adaskaveg, UC Riverside, has found that R. stolonifer is only able to infect almond hulls during a brief period of nut development. The highest incidence of infection occurred during the initiation of hull-split, when only a very small crack of the hull is present. This is classified as stage b2 (Figure 5) within the UC IPM manual. Later stages resulted in fewer infected fruit, and he concludes that the susceptibility differences of the stages are due to differences in hull moisture content. 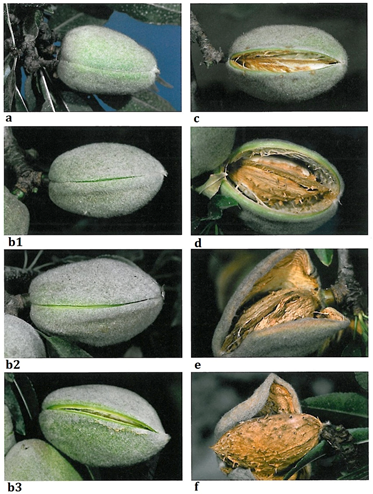 Sprays timed to the b2 stage will decrease hull rot incidence. Due to the variability of hull-split in the field, fungicides should be applied at 10-20% of hull-split. Both DMIs (FRAC 3) and strobilurin (FRAC 11) fungicides are effective. Increased populations of other foliar fungi at this hull split spray timing increases the risk of developing fungicide resistance, so fungicide sprays for hull rot should be used as a last resort, after changes to nitrogen and irrigation management. Fungicides applied at this time do not work on hull rot caused by Monilinia fructicola. Maximum residue levels (MRLs) of the fungicide chemistry used should be discussed with the processor/handler.

Hull rot management: bringing it all together. Successful management of hull rot will rely on both cultural and chemical control strategies adjusted for local conditions. A late season rain may reduce the effectiveness of deficit irrigation or prevent the application of a fungicide spray. A late frost may lead to reduced crop load and an over-fertilized tree. Heavier and coarser soil types make tree stress challenging, requiring a longer period of dry-down. Success and proper application will be dependent upon the monitoring of tree status through stem water potential readings, leaf tissue analysis, and observations of hull split timing.