Almond scab is a fungal disease of twigs, leaves, and fruit. Symptoms develop in spring and early summer and may cause pre-mature defoliation of trees. The disease is caused by Venturia carpophila (anamorph – Cladosporium carpophilum). Almond scab is common throughout the almond production regions of the Central Valley, especially in locations with high humidity (e.g., along rivers, orchard low spots, frequently irrigated orchards, sprinkler irrigated orchards) and poor air circulation.

Symptoms of scab develop slowly, 4 to 6 weeks after initial infection. On leaves, symptoms begin as indistinct, green-yellow lesions on the underside and later on both sides of the leaves. Once the fungus sporulates, lesions turn olive green. Extensive leaf infections may result in tree defoliation.

On fruit, small, green to olive superficial, circular spots develop mostly on the upper exposed surface. The spots enlarge, turn dark olive to black, and often coalesce, but do not result in fruit drop. On young twigs distinct, slightly raised, circular to oval, water-soaked lesions can develop in the spring. By fall, they are dark brown and slightly elongated. 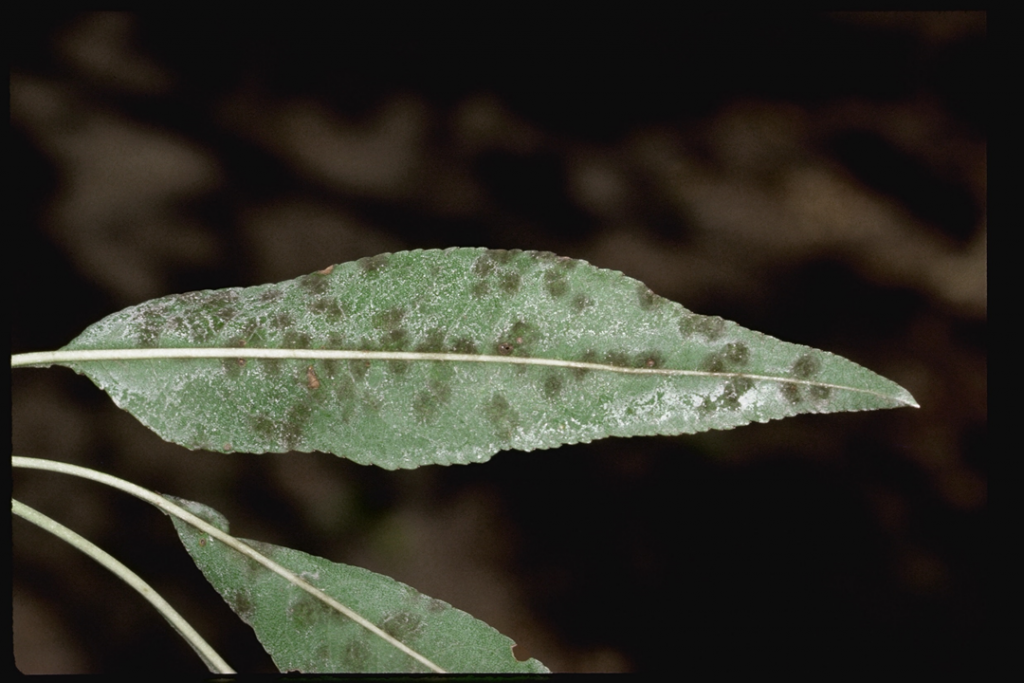 Four trials were set up in Butte Co. in the spring 2007 season. In trees that were treated with dormant or delayed dormant liquid lime sulfur (LLS), scab twig lesions were not sporulating as of March 21. Lesions on trees that were not dormant-treated were sporulating at that time. Approximately 50 to 75% of the lesions collected from the four locations had heavy sporulation of the pathogen C. carpophilum. Nearly all isolates sampled were resistant to the strobilurin fungicides. There is no partial resistance. Resistant pathogen can grow in the presence of high concentrations of the fungicide.

Trials are ongoing to evaluate fungicide rotation programs that do not utilize the strobilurin fungicides, going back to older multi-site mode of action fungicides registered on almond. Programs are comparing applications of captan, maneb, ziram, or chlorothalonil at petal fall at the onset of twig sporulation. This treatment is followed by captan, maneb, or ziram about 5-weeks after petal fall. Subsequent applications will utilize wettable sulfur and captan in rotations or in mixtures. This is a sound program that should prevent resistance from developing to any of these fungicides.