Adapted from the article “Bacterial Spot of Almond in California – Update on the Disease and its Management” by J. E. Adaskaveg, University of California, Riverside, B. Holtz, R. Duncan, and D. Doll, UCCE, San Joaquin, Stanislaus, and Merced Co., respectively, from the December 2014 Sacramento Valley Almond News.

Bacterial spot is a new bacterial disease of almond in California caused by Xanthomonas arboricola pv. pruni and has also been referred to as bacteriosis, bacterial leaf spot, or bacterial shot hole. Bacterial spot occurs on leaves, twigs, and fruit of almost all Prunus spp. In the spring of 2013, high incidence of bacterial spot were reported in some Sacramento and northern San Joaquin Valley almond orchards. The cultivar ‘Fritz’ was hit especially hard, but the disease was also found on ‘Nonpareil’, ‘Butte’, ‘Carmel’, ‘Monterey,’ and ‘Price’ at lower levels. The disease was reported in additional locations in 2014. The disease has not been found in orchards in the southern San Joaquin Valley.

Almond symptoms develop on leaves and shoots, but the most obvious symptoms are on fruit. Typically, almond hull lesions start as small, watery blemishes that produce light to dark amber gumming (as opposed to the clear gum of leaf footed bug injury). Lesions are brown and slowly increase in size to 2/32 to 5/32 inches in diameter during the season as the infection extends into the hull. Early season infections can cause fruit drop. Infections that reach the kernel may cause off grades, or un-marketable fruit. Symptoms are first visible 7 to 21 days after infection. 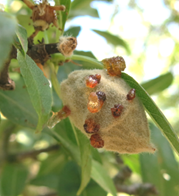 Overwintering symptomatic fruit mummies are likely the source of primary inoculum for the pathogen. Twig lesions and bud death have not been observed in almond but have been reported on other Prunus spp. In the spring of 2014, wet and warm conditions did not occur until mid- to late March, and fruit symptoms were first observed in mid- April. Infections appear to initiate on developing fruit during or immediately after shuck split under favorable conditions. The bacterial pathogen needs splashing water to spread and wet conditions to infect.

Strains of the pathogen evaluated to date were all rated as copper-sensitive with growth occurring at 20 ppm copper, but not at 30 ppm. Late-dormant treatments (late January) with copper, copper-mancozeb, or other combinations significantly reduced the incidence of disease. Early dormant treatments in mid-November or mid-December 2013 were not effective. In-season treatments were most effective when timed around rain events and before temperatures rose above 77ºF (25°C) in the springtime. Copper treatments were applied by halving the rate with each successive application (e.g., 1, 0.5, 0.25 lb MCE/A – metallic copper equivalent / acre). No copper phytotoxicity was observed after four applications when copper rates were successively reduced.

All copper products significantly reduced disease. Among products evaluated, however, Kocide 3000, Badge X2, Champ-Ion2+, and Cuprofix were more effective than Cueva. A single delayed dormant (copper-mancozeb) and a single in-season treatment (copper alone or copper+mancozeb) in mid-March timed before rainfall and warm conditions provided excellent control and was equivalent to five applications (delayed dormant and four applications in 10- to 14-day intervals starting at full bloom) using the same chemicals.

Other experimental treatments with high efficacy included Kasumin-Manzate, Kasumin-Captan, Kocide-Tanos, Mycoshield/Fireline (oxytetracycline; federally registered on peach for this disease), Serenade Optiva, and the new bacterial membrane disruptor Ceragenin. Kasugamycin was accepted into the IR-4 program in 2014 for registration on almonds and peaches in the United States.

Bacterial spot is a new bacterial disease of almond in California that is caused by Xanthomonas arboricola pv. pruni. The disease mainly occurs on cultivar ‘Fritz’ in Sacramento Valley and commonly develops on fruit. The pathogen likely primarily overwinters on diseased mummified fruit and infection periods are during warm, wet conditions during the spring as fruit and leaves develop.

To date, the most effective management program for bacterial spot includes a delayed dormant (Jan.) bactericide (e.g., copper-mancozeb) to reduce inoculum and at least one in-season application around rainfall events and rising temperatures (e.g., mid- to late March) to prevent new infections. In a wet spring, additional in-season applications may be needed. Most fixed-copper products and copper-mancozeb treatments are highly effective. Research into this new disease is ongoing.