Leaf blight is caused by the fungus, Seimatosporium lichenicola. The fungus kills individual infected leaf petioles, cutting off water to the leaf. Individual leaves on spurs or shoots wither and die usually in mid-summer. Leaves dry up suddenly and remain attached to the shoot or spur. The fungus can affect yield when it moves from the petiole into the axillary buds. When the axillary bud is killed, spurs fail to grow eliminating future fruiting positions. If spur leaves are infected the fungus can kill the spur, also eliminating future a fruiting position.

Although dried up leaf blades disintegrate over the winter, diseased petioles continue to stick on tree during winter. The fungus survives on these dead petioles. Spores are spread by rain, and disease is favored by wet spring weather or early summer rain. Leaf blight is usually controlled incidentally by fungicide applications targeting other diseases in the spring. As a result, it is rarely widespread and seldom kills more than 20% of the leaves in one season. Repeated early death of leaves will weaken trees, but most significant is its contribution to future yield loss as a result of bud or spur death and the loss of fruiting positions. 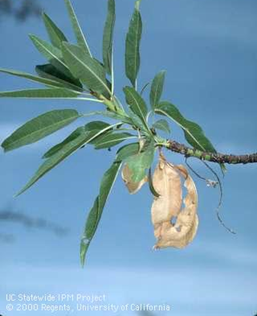