Leaf rust, caused by the fungus Tranzschelia discolor, favored by high humidity and leaf wetness, was prevalent in most vigorous young Sacramento Valley orchards this year. The late rains in May and mid-June really got it going in some locations, with additional fungicide treatments needed to minimize defoliation. Vigorous higher density plantings and micro-sprinkler irrigation with longer, more frequent irrigations can contribute to higher humidity and more accumulated leaf wetness hours (dew) resulting in more disease.

Rust appears as small, yellow, angular spots on the upper surface of leaves and rusty red pustules of spores on the lower surface (Fig. 1). The disease is more likely to become serious in two to four-year-old orchards near rivers or streams or other locations where spring and summer humidity is relatively high and where fungicides have not been applied. Excessive levels of nitrogen are also known to increase a tree’s susceptibility. Premature defoliation will weaken trees, reducing the following year’s bloom. The rust fungus overwinters in infected leaves that remain on the tree, spores contaminating buds and tree bark, and possibly infected twigs. 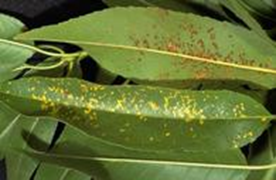 In orchards that struggled with rust this season, treatments next year should be applied before symptoms appear. Use materials effective on rust at 5 weeks after petal fall with a second application 4 to 5 weeks later to control leaf infections. Monitoring should be done from April through June. Once started, rust can spread explosively; orchards showing only 1% leaf infection are at high risk if favorable environments persist. Two or three applications may be needed in orchards that have had severe rust problems.

A zinc nutritional spray (zinc sulfate 20-40 lbs./acre) applied in early to mid-November resulting in defoliation may reduce overwintering rust inoculum. For tips on using zinc in the fall, see the Zinc and Boron article.

Fungicides effective on rust can be found at the UC IPM guidelines or the Efficacy and Timing of Fungicides Publication.