The continued saturation of tree root zones may lead to nutrient deficiency symptoms from reduced root activity. Sometimes these deficiencies are transient and symptoms resolve as the soil dries out and warms up.

However, if the season progresses and the soils warm up but stay oversaturated, the symptoms may persist or trees may show the “yellowing Krymsk” problem (Fig. 1). Symptoms include yellowing of the canopy, leaf rolling, and “stalling out” (trees that stop growing). Typically these symptoms show up on younger (1st -3rd leaf) almonds on rootstocks with plum genetics, namely Krymsk 86 or Marianna 2624. For those familiar with the Union Mild Etch disorder on Marianna 2624, the yellowing Krymsk 86 problems look similar, though there is typically no etching or pitting under the bark at the graft union. 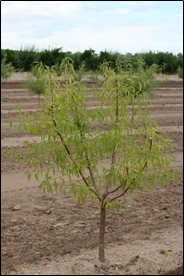 What should you do if these symptoms are observed? First and foremost, make sure you’re not over-irrigating! Roots need oxygen through good aeration of the soil to be able to grow and uptake nutrients efficiently. Carefully monitor soil moisture in the spring and be careful not to turn irrigation water on too early. Secondly, be patient. In our experience, once soils dry out, trees tend to push past the symptoms and will often begin to put on new growth. When over-irrigated well into the growing season, symptoms can persist for the remainder of the season, particularly on 1st to 3rd leaf trees.  If the problem is corrected, normal growth frequently resumes the following year