Boron is a weird nutrient in orchard crops, particularly in California. It’s needed in very small amounts, and some crops, like almonds, do not tolerate soil levels much above 1 ppm. To complicate things, boron tends to be deficient in some parts of the valley, such as sandy soils where canal water is the primary water source, and at toxic levels in areas in soils formed by old marine deposits.

Boron behaves differently across tree species. Understanding the differences in mobility is important because it determines what tissues you will be monitoring for deficiencies and toxicities, as well as how to rectify deficiencies. In most tree crops, for example pistachios, boron is immobile, which means once the plant has taken up the nutrient and transported it into the growing tissues, it stays there. This means that when evaluating deficiencies and toxicities, you should be monitoring leaves. Deficiency symptoms are cupped and deformed leaves, though they retain their green color. In more severe deficiencies, flower panicles can drop from the tree.  Boron toxicity symptoms are necrotic leaf margins, however in pistachios, toxicity symptoms can still be associated with high yielding orchards. In plants where boron is immobile, foliar sprays will only affect the current season’s growth, and severe deficiencies are better addressed through soil applications. 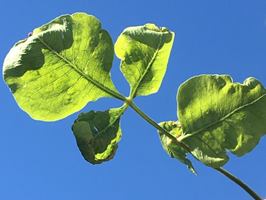 In almonds and other Prunus species, boron is mobile, since it is involved in the transport of photosynthesized sugars. You should be monitoring deficiencies and toxicities in the location where the season’s photosynthate ends up: the fruit (and specifically, the hull). Severe deficiency symptoms manifest as shoot tip dieback, whereas more mild deficiencies can show up as internal gumming in the fruit. Severe toxicities will cause gumming in the trunk as well as tip dieback, though the reason why is unknown. Since boron is mobile, foliar sprays can affect future year’s crops, though the effect is more limited than with soil applications. 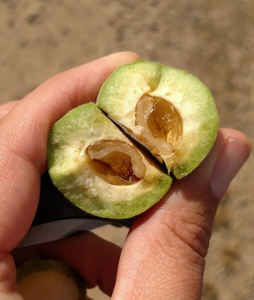 Amber gumming fills where the kernel should be developing in these boron deficient almonds. Photo credit: D. Lightle

In order to first assess your field’s boron levels, it’s important to have your soil and irrigation water tested. In some areas, groundwater is a significant source of boron.  I would never advise embarking on a fertilization regime unless you know that both your water and soil levels are low. If both show low levels of boron, next you’ll need to test your plants to assess how deficient they are in boron. As boron is immobile in pistachios, you should be monitoring leaf levels with your July leaf tests. In almonds, you should be monitoring boron with hull samples pulled at harvest time. I want to stress that boron deficiencies do not show up in almond leaves, so you can’t rely on your spring time or July leaf samples to ensure your plants are adequately fertilized.

The table above states the critical values for almond and pistachio; these are values below which you will see deficiency symptoms manifest in the plant. Actual sufficiency values, which are levels where yield is not negatively affected are much higher; in pistachios it is between 150 and 250 ppm, and in almonds between 100 and 160 ppm.

To correct minor boron deficiencies, conduct spring foliar sprays in pistachios, using 2.5 to 5 lbs of Solubor in 100 gallons of spray at the bud swell period (early to mid-March, depending on spring temperatures). Use much lower rates in almonds – 1 to 2 pounds of Solubor in 100 gallons of water. Almond sprays should be timed after harvest before leaves fall for best effects, or at bud swell but before the trees are in bloom. Boron sprays during bloom can damage flowers and interfere with bee pollination.

Major boron deficiencies must be corrected via a soil application. In both almonds and pistachios, broadcast 25 to 50 lbs of Borax per acre (about 2-4 lbs of actual boron). Failure to broadcast applications can result in toxicity symptoms. Monitor leaf tissue levels closely to ensure the deficiency has been corrected. In pistachios, which have a greater need for boron and higher tolerance toxic levels, severe deficiencies may need to be treated with both soil and foliar sprays.