There’s been renewed interest in the last few years in cover cropping in orchard systems. There are plenty of benefits that can come from cover cropping in an almond orchard, including improved orchard access, improved water infiltration, encouraging native pollinators and improved honeybee health. Many of these benefits (improved soil structure, water infiltration, nutrient cycling, microbial population and diversity) are collectively referred to as improved soil health. If you’re interested in planting a cover crop this fall, July is a good time to pick out your seed mix and get it ordered, before the chaos of harvest, so the seed is ready for you in October. But all the options of species to plant can be overwhelming. Herein we’ll review how to pick a cover crop seed blend for a particular orchard. 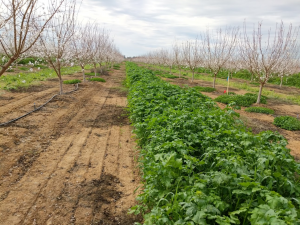 The first step in picking a seed mix is figuring out your goal or goals in cover cropping. Different species or classes of cover crops excel at different tasks. We’ll talk about three basic groupings of cover crops – grasses (e.g brome, fescue, triticale), legumes (e.g. clover, medic, vetch) and brassicas (e.g mustard, canola, radish). Note that the following is meant for non-tilled almond orchards in the Sacramento Valley that need a clean orchard floor for sweeping and pick up. Tilling or harvesting into a catch frame allows other options (e.g. green manure, summer annuals, perennial cover), which won’t be discussed here. We will only be discussing reseeding winter annual options.

Cover crops can add, scavenge or buffer nutrients, depending on what crop you choose. To add nitrogen to a system, turn to legumes. These include clovers, subterranean clovers (sub-clovers), medics and vetches. To scavenge nitrogen in the fall and winter, to keep nitrate from leaching, you need an early growing cover crop with an extensive root system. Grasses are usually the best choice for this job. , Increased soil organic matter from any vegetation will help buffer nutrients in your soil so they are released at a slower, steadier pace during the growing season.

A vegetation cover will increase water infiltration, reducing run-off and allowing for earlier and easier orchard access in winter and spring. For early-season infiltration, you need a crop that grows early. Grasses usually excel at this. For creating channels for water in the soil over many years, the thicker roots of brassicas give more long-term benefit. Over time, any additional vegetation in the middles will increase soil organic matter and improve soil structure to improve water infiltration.

Cover crops can outcompete weeds for sunlight to help put a dent in a pernicious population as part of a larger weed management plan. Fast, early growing crops (e.g. many grasses) are one approach. Another approach is planning to mow early-growing weeds to allow an aggressive, mid-season broadleaf cover (e.g. brassicas, legumes) to take over.

Cover crops can provide a food source to strengthen honey bee hives before and after bloom, and can provide sustenance for native pollinators and beneficials. For pre-almond bloom food supply, mustards are your go-to. Nothing else will bloom early enough, and even mustard needs to be seeded and watered up early to get bloom by early February. If your goal is to support pollinators after almond bloom, basically anything with a showy flower will get the job done (the more variety, the better for their health). This can include clovers, vetches and brassicas.

Any additional plants growing in your soil will improve soil health, in different ways and to varying degrees. The fastest path to increased soil organic matter is introducing a lot of high carbon, low nitrogen biomass. For cover cropping that means growing grasses and tilling them into the soil. For most orchards, this is only an option in the first 1-3 years of an orchard, before commercial harvesting starts. A sustained commitment to soil health has to also work with the rest of your management system, and ideally benefit other aspects of your management practices. Any plants growing in your orchard middles are more beneficial than bare soil when it comes to soil health. 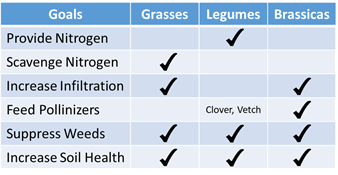 Figure 1. Identify your cover cropping goals, then find the species or group that will meet your goal.

The primary concern for cover crops in almond orchards is “Will it be gone in time for harvest?”. This will largely be influenced by management decisions in the spring and summer such as when you terminate, how many times you flail mow, and if you can irrigate the biomass to speed up decomposition. However, the carbon to nitrogen (C:N) ratio plays a big role in the speed of biomass decomposition, and this is controlled by your seed selection. All other things being equal, the more nitrogen in the biomass, the faster it will decompose. The woodier the biomass, the slower it will decompose. In other words, legumes decompose faster, whereas grasses and brassicas decompose slower. For early experimentation, consider a more legume-heavy mix. In this context, also keep in mind that the sunnier the orchard, the more that grasses will thrive. So, for younger orchards with plenty of light still getting to the middles, take caution with how much grass is in your seed mix. Depending on the frost risk in your location consider a low-growing cover such as sub-clover that can be mowed prior to bloom but will re-grow and set seed later in spring.

Don’t Put All Your Eggs in One Basket.

For consistent success with your cover crop, plan for the inconsistent. Using a blend of different groupings of cover crops will help achieve many goals at once, and provide synergies. For example, early grasses can outcompete weeds, allowing room for legumes to later thrive and provide nitrogen. That nitrogen in the legumes can then tip the C:N ratio in favor of faster decomposition of the grasses. But even within groupings, variety is your ally because different species have different tolerances for flooding, heavy soil, cold, and different bloom timings. For example, using a mix of multiple species of clovers will ensure that in any given year, at least one will thrive to produce the nitrogen-rich biomass you’re hoping for.

Recent trials by almond advisors at three sites in the Central Valley has illustrated the point that you don’t always reap exactly what you sow. The same pollinator seed mix, comprised of mustards (45%), radish (20%), and canola (35%), was seeded at each site in both 2017-18 and 2018-19. The graphs show the percentage of the total biomass represented by each species. Not only did the cover crop species assemblage look different at each site; there was also significant variation in the cover crop between years at the same site. For example, in Corning in 2017-18, mustards made up the majority of the cover crop biomass; in 2018-19, the majority of the biomass was represented by canola. In Merced, the cover crop in 2018-19 had a much more difficult time competing with the resident vegetation than at the same site in 2017-18. 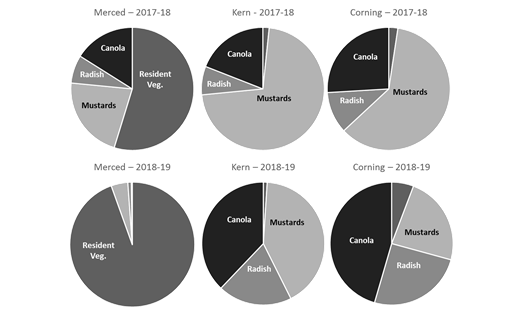 The Right Blend for Your Orchard?

There’s not one perfect almond orchard cover crop seed mix. Most suppliers have a couple of established blends, with explicit emphases (e.g. erosion mix, pollinizer mix). Think through your goals to see if one of these is right for you. Some suppliers will create a unique blend for a fee. One tool that can be helpful in creating your own blend is the NRCS eVegGuide. This tool helps narrow down species options based on your orchard location, and can tell you how many pounds of different seeds to order based on the percent you want in the mix. If you want to start from scratch with your own blend, two other resources, the UC ANR cover crop database and SARE’s Managing Cover Crops Profitably  provide loads of details on different species options, like ideal temperatures, soil pH tolerance and seeding rate.

Whichever cover crop blend you choose, starting in a small section of an orchard, or just one block, is a great way to get comfortable with the extra management you’ll have to add to your seasonal routine. If you’re interested in trying a cover crop but want some financial help doing so, you can reach out to the UC-CDFA Healthy Soils Educator (call your local UC extension office) to sign up for the Healthy Soils program next year, your local NRCS office, or the Seeds for Bees program.