Mild, radiation frosts occur on still, clear nights, usually with the development of a strong inversion. Cold air accumulates in low spots or in areas where air drainage is blocked. Under these conditions, a few degrees of frost protection may be all that’s needed and it can be provided by running water, flying helicopters, or running wind machines in narrow valleys.

Advection freezes are more severe and often result in damage. They occur when cold air blows into a field from outside the orchard. Usually they are associated with wind greater than 4 mph. Formation of an inversion under these conditions is unlikely making successful frost protection extremely difficult.

If water is used for frost protection, critical temperatures for frost damage help us know when to turn irrigation systems on or off. Buds showing pink are more resistant to cold compared to flowers at the full bloom stage, which are in turn more resistant than small nuts (see Table). 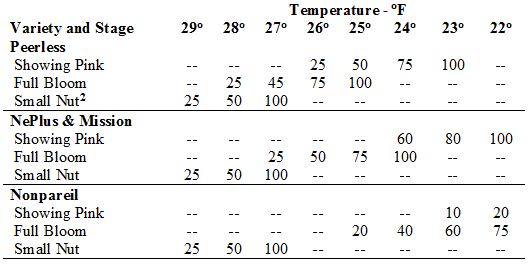 Groundcover affects orchard low temperatures, with any cover taller than 4 inches generally being colder than no cover. Soil heat storage is reduced because sunlight is reflected and water is evaporated. Keeping groundcovers cut 2 inches or less during frost season allows sunlight to reach the soil surface, and increases soil heat storage resulting in a warmer orchard through the night.

Bare, firm, moist soil is warmest, but this is true only when the surface is moist. If pre-frost conditions are dry and windy and a dry crust forms on the surface, bare soil can be colder than a surface with a short groundcover, which keeps the soil surface moist with dew. The ground surface must be moist for bare ground to be warmest. Dry or recently cultivated soil has many air spaces, lower heat storage capacity, and low heat conductivity resulting in colder minimum temperatures. Moist soil stores more heat due to the higher heat conductivity of water, and will have higher minimum temperatures.

Irrigation should ideally wet the top foot over the entire orchard surface, soil moisture should be near field capacity, and these conditions should be achieved in advance to gain the most advantage. A light irrigation to moisten the soil the morning before a frost will help obtain the greatest heat storage.

Under-tree sprinklers provide protection because heat contained in water is released into the orchard system. As water cools and freezes, it releases a great deal of latent heat. This sensible heat is radiated and/or convected into the trees, thus providing protection. Sprinklers can be safely turned off when the wet bulb temperature upwind of the protected orchard is above the critical damage temperature for the stage of the crop or when all the ice melts.

In some orchards, frost protection is limited by the amount of water or pipe available. To learn more about moveable pipe placement we ran an experiment comparing protection with sprinkler lines in every middle, every other middle or every fourth middle. Air temperatures in all sprinkled areas were 1 to 2oF warmer than the unsprinkled control and there were no differences between these spacings. Soil surface temperatures were colder the further from the sprinklers with the dry centers between the lines in every fourth middle as cold as the unsprinkled control. Line spacing directly affects soil surface temperature but air movement evens out the benefits. Without some air movement, protection will fail between widely spaced pipelines. Limited amounts of water may provide some protection from mild frosts but protection will fail as frosts become more severe.

In our experiments with micro-sprinklers, different application rates (15, 25, and 40 gallons per minute per acre) had little effect on air temperature but did affect the temperature of exposed buds and flowers. Higher soil surface temperatures from higher rates led to more radiation heating. Exposed temperatures – the temperatures the buds experienced — were 1 to 2 oF warmer at the higher water rates. This difference indicates micro-sprinklers protection results from direct radiation from the warmer wet spots rather than through convection of warmer air. We found a greater separation in exposed temperatures between the low and medium/high rates on the colder nights. Under windy advection freeze conditions this may be even more important since convection heating is negatively affected by wind but radiation is unaffected. 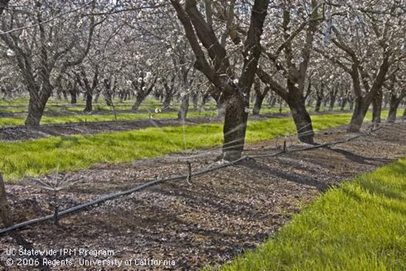 Drip irrigating in advance of a frost can help keep the orchard slightly warmer by increasing soil heat storage particularly if the soil surface is dry. Running the system during a frost may provide slight benefits due to radiation heating from the wetted area beneath the trees. Flood irrigation for frost protection works in a similar fashion but due to larger water volumes it will provide more protection.

An interesting observation made during wind machine research in Chico was that even under ideal conditions, a 36 inch tall cover crop appeared to reduce the wind machine response in the lowest part of the trees canopy. Wind machines can provide economical frost protection, but only in favorable locations; primarily narrow valleys with strong inversions and low ceilings. The weak inversions usually found in orchards on the floor of the Sacramento Valley limit the usefulness of wind machines for frost protection in much of our area.

The helicopter is usually effective for frost protection under the same conditions as those effective for wind machine operation. A warm inversion layer is needed. With the helicopter, the operator has the advantage of being able to choose the level in the inversion where the temperature is most beneficial.

During a radiation frost night an inversion forms and temperature increases with height. At the ceiling height, the temperature reaches a maximum and then begins to decrease. During a strong inversion with a low ceiling, temperatures increase rapidly with height. Under these conditions helicopters can be used successfully for frost protection. Under advection freeze conditions, helicopters are usually ineffective since there may be no inversion at all. If there is a weak inversion, the ceiling is very high and protection with helicopters is difficult.

During the day, pilots should be shown the location of cold spots and hazards must be identified (towers, buildings, etc.). The periphery of the area to be protected should be marked with strobe lights so the pilots know where to fly and the lights can be differentiated from other lights on the ground. If you use helicopters for frost protection, stay in communication with your pilots. Nighttime fatigue of pilots has been identified as a major problem.

Larger helicopters push more air and hence protect a larger area. Adding weight to the helicopter by filling water tanks also increases the thrust and hence the protection afforded. In general, a small helicopter can protect 50 to 100 acres under most mild radiation frost conditions. For colder conditions, one helicopter may be needed for each 40 acres.

The area that needs protection should be covered every 30 minutes. Thermostatically controlled lights can be very useful because they indicate when a pass has been effective and they identify cold spots. Communication with a ground crew can also help identify cold spots.

One method of identifying flying height is to place an electronic thermometer outside the helicopter and fly where the temperature reading is the highest (the ceiling). The other method is to have the ground crew measure the change in temperature at the lower canopy level with passes at various heights until the optimum height for a good temperature response is found.