A saturated soil profile can damage orchards in two ways. First, tree roots respire and require oxygen. Saturation in the root zone can suffocate roots resulting in damage or death. Second, Phytophthora, a water mold fungus, requires saturated soil conditions to infect trees. Phytophthora colonizes tree roots and crowns killing the cambium, resulting in root damage or death. The amount of damage resulting from prolonged periods of soil saturation is dependent on many things including tree age and species, the presence or absence of Phytophthora, temperature, duration of saturation, and stage of development. 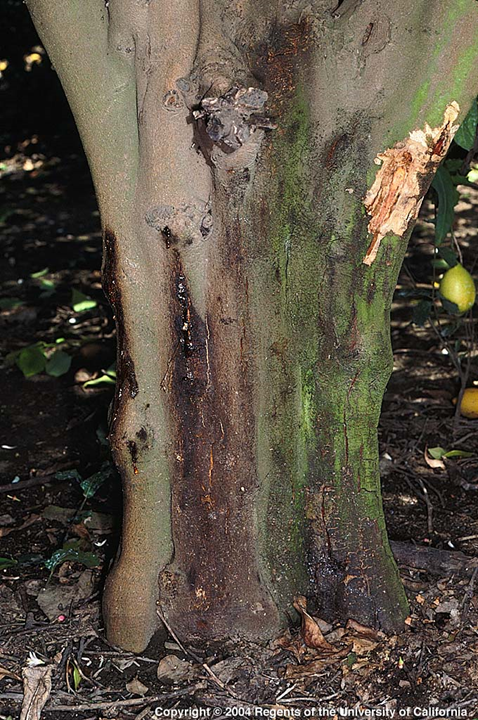 Most of the tree crops are susceptible to root suffocation and Phytophthora. Almonds, walnuts, peaches, and cherries are among the more susceptible. Prunes, olives, pears, pistachios and pecans are more resistant. Phytophthora is widely distributed because it can be moved about by water. It is generally present in areas which are prone to flooding or have been irrigated by surface water sources. It’s important to keep the drip irrigation wetted zones away from the crown of the tree, keeping emitters at least 3 feet away from the trunks of established trees. Irrigation sets should not run continuously for more than 18 hours. Young trees are at greater risk of dying because roots and crowns are smaller and are more easily killed or girdled.

Since respiration rates are lower and fungus activity is reduced during cooler winter conditions, trees will tolerate longer periods of saturation at that time. Shorter periods are tolerated as the temperatures warm. Dormant trees will tolerate longer periods of soil saturation than will actively growing trees. An example of this would be an almond orchard which experiences greater losses on earlier blooming varieties than on the later blooming varieties. Additionally, water that’s flowing is believed to be less damaging than stagnant water, presumably because of greater amounts of dissolved oxygen.

In summary, trees at greatest risk are actively growing young trees of a susceptible species that are standing in stagnant water during warming temperatures.