Dormant monitoring is an important activity that can help you decide whether to pursue treatments of some pests (primarily scales and mites) in the dormant or delayed dormant period. A visit to the orchard during the dormant season can also provide information as to the level of pressure that might be expected from certain pests going into the following growing season. Pesticide applications during the dormant and delayed-dormant periods can be quite effective. Coverage tends to be very good since there are no leaves in the way of the application. Most natural enemies are not active during these times. Consequently, pest numbers can be reduced without simultaneously harming natural enemies – leaving those ‘good bugs’ to continue suppressing pests during the growing season and further enhancing your overall IPM program.

Obviously, dormant season treatments are not a panacea for all orchard pests and come with risks. Runoff can be a big problem during the dormant season – especially when rain is in the forecast or soils are already saturated. Aside from common-sense principles governing dormant applications based on environmental conditions, there may be locally-based regulations limiting dormant treatments. Consult with your local Agricultural Commissioner to ensure your recommendations are in compliance. Additionally, costs associated with dormant applications may be higher than in-season applications, and orchard access can be a limiting factor.

Dormant monitoring can be done anytime between late November and January; although (depending on your turn-around time for applications), January is on the late side if you determine that a dormant treatment is warranted. The basics of monitoring are to examine spurs or branches for the presence of target pests and evidence of biological control, determine whether pests are abundant enough to merit treatment, and make an informed decision on treatment type and timing. 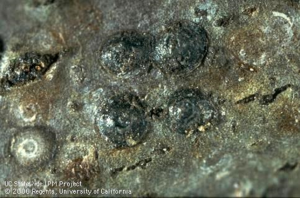 San Jose Scale in the black cap stage, as found during the dormant (overwintering) period.

Collect 100 spurs. Aim to survey 35 to 50 trees across the orchard. From each tree, collect 2 to 3 spurs by clipping at the base of the spur, including some old spur wood. Be sure to select spurs from different locations in the canopy (interior and exterior). Begin by examining the first 20 spurs and record presence/absence of San Jose scale on each spur. Continue examining up to 100 spurs (in batches of 20), following the decision making flow chart below, and consider treatment if the thresholds are met: 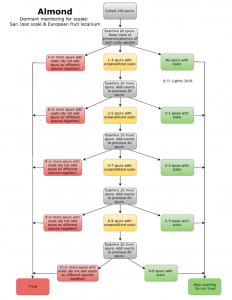 Decision making tree for dormant monitoring of San Jose scale in almond. Click image to enlarge. Here is a .pdf of the San Jose Scale Decision Tree that you may save or print.

Treatment decisions should be based on the level of infestation observed. In almonds, the most common dormant treatment is oil, which works by suppressing the respiration of scales or mite eggs. Infestation levels of San Jose Scale greater than 60% may require the addition of an insect growth regulator (such as Seize® and Centaur®) for better control. Other contact materials, such as carbaryl, carry the risk of toxicity to bees, especially if they are applied too close to bloom, and organophosphate use during the dormant period poses a serious threat to water quality.