The Many Possible Causes of “Gummy Nuts”

There are several biological factors and non-biological conditions that cause “gumming” in almonds. “Gummy nuts” may refer to different symptoms depending on which part of the fruit is affected. In this article, the term “hull gummosis” refers to the exudates (typically clear to amber in color) that are visible on the outside of the fruit. Depending on the cause and extent of fruit damage, we may also observe gumming on the shell and in the kernel.

In general, dissection of the fruit, as well as a holistic approach to assessing the orchard and surrounding landscape is necessary to determine the cause of symptom expression and crop damage. Often, once hull gummosis or gummosis with underlying kernel damage are observed, the opportunity to mitigate the cause of damage has passed for that season. However, identifying the cause of symptoms, relationships to other orchard factors that lead to the development of symptoms and damage, and the timing of initial onset will allow you to develop improved monitoring and crop protection strategies.

Diseases. With hull gummosis arising from disease infection, there will typically be signs and disease symptoms apparent on other parts of the plant. Orchard history of disease, timing of symptom development, cultivars affected, and weather patterns can help distinguish the cause(s) of symptoms. Anthracnose and bacterial spot are the most common pathogen-induced infections that lead to hull gummosis.

Anthracnose. When small nuts are infected, they shrivel and turn a rusty orange color. When larger nuts are infected, they exhibit round, sunken, orangish lesions and profuse hull gummosis as the infection progresses into the kernel. Anthracnose gummosis is typically amber in color with multiple exudate sites on the hull (Photo 1). Eventually, infected nuts die and remain attached to the spur as mummies. Symptom development on the outside of the fruit (i.e., hull gummosis) is dependent on the timing of initial infection and rate of disease progression. In most years, it is evident by mid- to late-April. 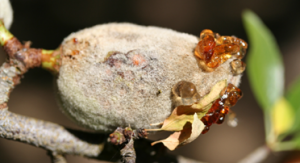 Other signs and symptoms of anthracnose infection may be evident, including blossom blight, marginal leaf necrosis, and dieback of shoots and branches later in the season beyond infected nut attachments. Prolonged warm (>59°F), rainy weather extending into spring, are most conducive to disease. All varieties are susceptible, with Butte, Fritz, Monterey, Peerless, Price, and Winters among the most susceptible. Nonpareil is less likely to be infected unless adjacent to a heavily infected pollenizer. 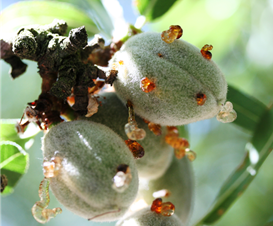 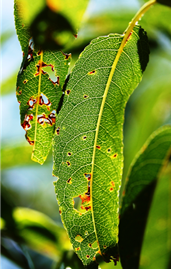 Insects. Several types of insects cause hull gummosis. Hemipteran insects, or “true bugs” (i.e., those with piercing-sucking mouthparts), particularly leaffooted bugs and stink bugs are generally responsible for the hull gummosis that is associated with crop damage. Feeding by a number of other “bugs” (e.g., box elder bugs, Phytocoris species, Calocoris species) and feeding by Lepidopteran (worm) pests may also cause hull gummosis. The key factors causing different fruit symptoms involves the length of insect mouthparts and the fruit tissue they can reach. The mouthpart factor differs with species, and among adults and nymphs. The fruit tissue factor differs with hull thickness and shell hardness (both vary in time and among varieties), and stage of kernel development when feeding occurs.

With insect-caused hull gummosis, shell, and kernel damage, darkened feeding channels are evident upon dissection into the hull. Probing may extend into the shell and kernel (based on the factors noted above). The most accurate way to distinguish which bug species are causing the damage is by visual observation of the presence of the insects themselves (adults, nymphs, or egg masses), but other factors such as timing, extent of damage, and landscape characteristics can assist in the evaluation.

Leaffooted Bugs (Family Coreidae). Leaffooted bug (LFB) feeding on young fruit prior to shell hardening can cause the kernel to wither and abort, and may lead to nut drop. LFB feeding impacts lessen as shells harden, but may still cause dark spots on the kernel, gumming of the kernel, or wrinkled and misshapen kernels. Hull gummosis caused by LFB feeding is clear to light-yellow, originating from each feeding site. LFB often produces exudates from multiple feeding sites on individual nuts. The extent of kernel damage depends on whether feeding made it through the shell and into the kernel. Soft shell almond varieties are more susceptible to kernel damage for a longer period during the season. LFB damage typically occurs in a distinct window of time, usually during March and April. Hull gummosis caused by LFB manifests 3 to 10 days after the initial feeding. LFB feeding decreases in May and June, while stink bug feeding increases at that time. Base treatment decisions on the presence of LFB adults, nymphs, and egg masses (Photo 5) from March to early May, because LFB may have moved out of the orchard by the time hull gummosis or aborted nuts are obvious. 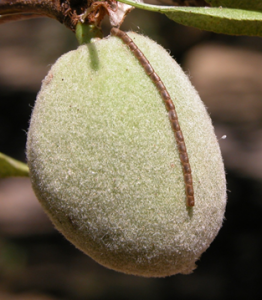 Stink bug feeding in almond orchards typically occurs from May through July. Movement into orchards in spring occurs when other weed or crop hosts dry down, so this can be earlier in years with dry winters/springs. The appearance of stink bug feeding is similar to LFB but timing is a key factor in separating the two, since stink bug feeding occurs later in the season than LFB feeding. Feeding typically only extends into the hull, so nut abortion and kernel damage are rare. Stink bugs are less mobile than LFB, so feeding tends to be more localized (clustered) in the orchard. Visual evidence of stink bug adults (Photo 6), nymphs, and barrel-shaped egg masses, can indicate whether they were the likely cause of fruit symptoms.Brown Marmorated Stink Bug. BMSB has been present in California since 2008 but has only recently begun to move into some agricultural commodities (commercial kiwifruit detection beginning in 2014, peach in 2016, and almond in 2017). To date, reports of serious infestation and damage in almond have been limited to a few orchards in Stanislaus and Merced counties. Evidence of feeding (hull gummosis from multiple feeding sites) and shell and kernel damage by BMSB seems to be similar to LFB (if occurring early, before shell hardening) or other stink bugs (if occurring later, after shell hardening). Severity of damage may be greater for BMSB due to larger numbers clustered in areas of orchards.

Recent research by UCCE Area IPM Advisor Jhalendra Rijal indicates that BMSB begins feeding on almonds as early as mid-March, and may continue well into summer. Fortunately, there are traps and lures available for BMSB. Visual observations of adults, nymphs, and egg masses and location of the damage may help indicate the source if occurring during the same time period as either LFB or other stink bugs. For BMSB, pay particular attention to border rows next to overwintering sites (structures, wood piles), other known hosts (Tree of Heaven harbors high populations of BMSB), and riparian areas.

Boron deficiency produces clear gummosis on the sides of the hull or at the suture line. Copious internal gumming and discoloration of the developing kernel will be visible upon dissection (Photo 8). Fruit drop may occur, or if nuts remain in the tree, internal gumming will harden and cause misshapen kernels. Boron status can be evaluated by analyzing hull samples. 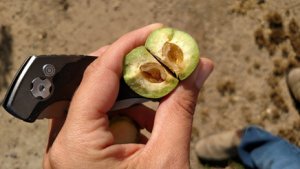 Physiological processes such as rapid expansion of the growing kernel, causing increased pressure on the shell and hull can produce hull gummosis. Dissection of the fruit will show a water-soaked gummy area on the outside of the shell, clear gummosis exuding from the suture line or side of hull, and no apparent feeding channel (indicating bugs as the culprit). Kernels appear healthy and affected nuts often remain on the tree with no negative impacts.

In summary, hull gummosis in almonds can be caused by a number of different biological and non-biological factors. More severe crop damage occurs if kernels are impacted, but this is not always the case. Understanding how to identify the source of symptoms is a key component for effective integrated pest management and crop production programs.

More detail on identification and management of the potential causes of hull gummosis, shell, and kernel gumming can be found in the UC Statewide IPM Programs Pest Management Guidelines for Almonds.