Farming is a tough enough business. Don’t help disease dam-age your orchard. There are a number of fungal and bacterial diseases in the Sacramento Valley that can infest your orchard and reduce orchard productivity. When you prune before rain, you could help the pathogen(s) damage your orchard – espe-cially young orchards. Although these diseases can have vastly different biology, there are some basic practices to keep in mind that will help keep them in check.

The disease triangle during winter:
The “correct” environmental conditions, a susceptible host and an active pathogen are all needed before disease will occur (i.e. the disease triangle). It’s safe to assume many canker-causing fungi and bacterial pathogens are present in your or-chard, so prevention means minimizing conditions that favor disease and host susceptibility. Each winter the conditions for infection can come together when pruning wounds make the tree susceptible, wind driven rains spread the pathogen, and water along with the right temperatures favor the pathogen’s proliferation.

Pruning leads to susceptibility:
Bark protects the interior of the tree from disease infection. Pruning exposes sensitive tissue, and since pruning cuts re-quire time to heal (reform a protective layer), pathogens can infect the wood before healing is complete. Almond studies on pruning wounds and Phytophthora syringae infections, showed that the wounds become less susceptible to infection after two weeks, when temperatures were still warm in the fall. However, pruning wound healing took six weeks to ade-quately reduce infections when temperatures were cold during winter. As the time between pruning and subse-quent rainfall increases, the susceptibility to disease generally declines but it can vary widely depending on the pathogen.

Wet/cool conditions and Phytophthora syringae:
Phytophthora syringae, one of the fungal pathogens that causes trunk and branch cankers, is active under cool wet conditions with temperatures below 75 °F. This soilborne disease is particularly problematic in wet years like 2011 that bring saturation and flooding, as the fungal spores can float in standing water and infect the tree. Adequate drainage is thus another important disease prevention step in high rainfall years. Copper sprays right after the pruning of 1st or 2nd dormant scaffolds are toxic to the spores and may reduce infection. The applica-tion of phosphonates to prevent infection is not advised. The fungus dies out once temperatures rise above 75 °F with the cankered area healing over from the margins, much like a pruning cut heals following pruning. 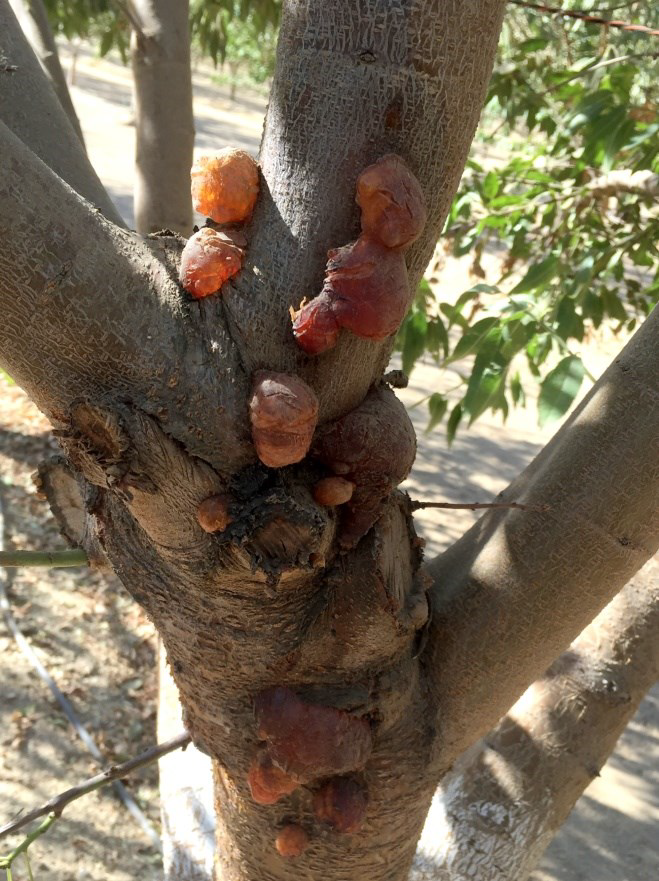 Figure 1. An almond orchard in Colusa County with widespread Botryosphaeria canker disease, likely the result of December pruning in 2014 and subsequent heavy rainfall. These almonds, planted on a peach/almond rootstock, were adjacent to a row of black walnut trees which most likely served as a source for the initial spore inoculum of the Botryosphaeria pathogen. Photo by Luke Milliron (10/8/2015).

Control by avoidance:
Ideally, avoid pruning prior to predictions of signifi-cant extended rainy periods. Figure 1 shows what can happen when pruning cuts are made just prior to a rain event. When pruning is necessary such as train-ing young trees or removing diseased limbs, try to avoid the practice when wet conditions are predicted in the two week forecast. Whatever you do, don’t mix pruning and rain.

Protectants and cultural controls:
Spray applications of copper materials and broad spectrum fungicides applied to wounds prior to sub-sequent rains may be helpful in protecting new prun-ing wounds on young trees from infections. Pruning wound protectants have been tested by UC research-ers in California for sweet cherry and grapevine. This work suggests that it may be beneficial to protect large pruning cuts with acrylic paint or pruning seal-er. Florent Trouillas, Plant Pathologist at the Kearney Agricultural Research and Extension Center, and his Ph.D. student Leslie Holland (UC Davis) will be test-ing pruning sealers and fungicides on almonds in the coming year.