Crown Rot. With fall Phytophthora infections, trees will begin to push buds in the spring but will quickly wilt and die before new growth occurs. Excavating around the crown and cutting into the tissue will show brown discoloration under the bark. The cankers may extend up the trunk from the soil, sometimes nearly to the scaffolds on young trees. Slight depressions in the soil around tree trunks where water might puddle during rainy periods can be just enough to make one tree sick and die while others nearby will be unaffected. The best solution is to replant on a mound to make sure drainage around the crown is good. 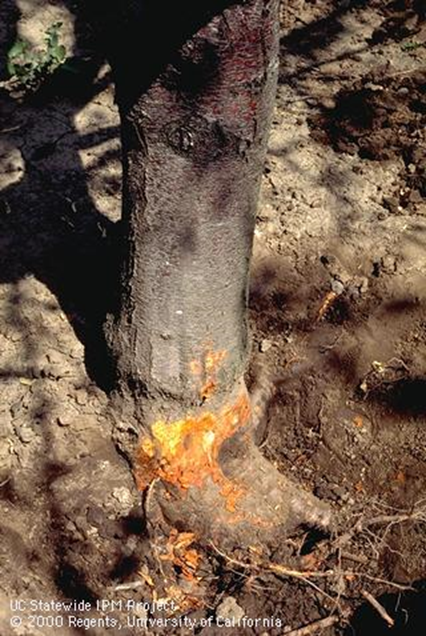 Crown Rot on an Almond Tree.

Pruning Wound Canker. Phytophthora syringae was isolated from pruning wound cankers during cool wet conditions in the early 1980s. This fungus is well adapted for growth and development in almond tissue under the common winter conditions of the Sacramento Valley – mild temperatures and high rainfall. In subsequent research, P. syringae was found to be virulent in branch cankers over a broad range of temperatures from 36o to 68o F with lower temperatures resulting in larger cankers. Phytophthora cankers can quickly expand from an infection site at pruning wounds extending to more than 6 inches within three weeks of infection. As spring progresses, amber colored gum balls extruding through the bark are frequently seen at the cankers margin. 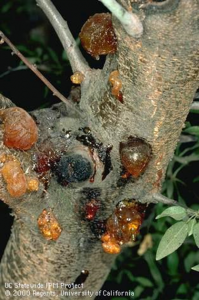 These cankers die out as temperatures warm during late spring and by June the fungus cannot normally be isolated. The inability to isolate the fungus later in the season is not surprising since P. syringae will not grow at 80o F or above. This temperature is frequently exceeded during April and May in the central valley.

In subsequent seasons, after the cankers have died out and gumming has disappeared, the dead area will appear as a sunken canker with wound healing occurring from around the canker margins. If these cankers are on larger wood they may have little impact on the vigor of the branch. If they occur on young trees where competing scaffolds were removed to train the trees or if multiple cankers girdle a larger branch then death of the tree or branch above the cankers can occur.

Dried gum observed around inactive cankers in June through September can lead to confusion between this disease and other warm weather canker diseases such as those caused by Ceratocystis fimbriata and Botryosphaeria dothidea fungi. Both of these fungi have also been documented to occasionally invade pruning wounds under the right conditions. Cankers caused by these fungi are sometimes slower growing but they can be perennial cankers that eventually girdle and kill branches. If cankers are on a branch that can be removed by pruning that is the best way to eliminate the problem.

C. fimbriata cankers are usually small diamond shaped cankers around the pruning wound. B. dothidea cankers have been observed to grow very fast surrounding pruning wounds made near the crotches of young trees. In recent research, a wide range of fungicide treatments were applied to B. dothidea trunk cankers and to healthy tree trunks to try and protect them from infection. The fungicide treatments were not successful in restricting size of existing cankers nor did they protect healthy trees from new infections during the season when treatments were applied.