Pruning wound protection: How to reduce the impact of canker diseases

As we approach winter in the Sacramento Valley and almond trees enter dormancy, pruning becomes a top priority for many growers. Whether it’s pruning for scaffold selection or to remove old, minimally productive wood to stimulate renewal of fruiting wood, pruning is often considered a dormant season practice. In California, almond dormancy overlaps with the winter months when most precipitation occurs. After a six-year drought, California experienced record-breaking rainfall in the winter and spring of 2018 and 2019. Rain events are strongly correlated with the spread of fungal canker pathogens whose primary infection sites are pruning wounds. Results from sampling over 140 almond orchards found 21 different fungal pathogens associated with these canker diseases. While the pathogens differ in biology, there are common approaches to prevent infections.

An ounce of prevention is worth a pound of cure

Most fungal pathogens that cause canker diseases are present throughout the Central Valley – so why aren’t all the trees infected? For infection to occur not only does the pathogen need to be present, but the environment (i.e. rain and temperatures) must be favorable for infection and the host must be susceptible to infection (i.e. unprotected, fresh pruning wounds). Therefore, practices that minimize conditions favoring disease development and host susceptibility are crucial. 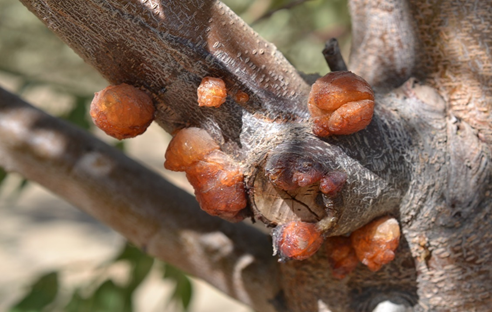 Pruning exposes the vascular and cambial tissues (otherwise protected by bark) that are susceptible to infection. Since these wounds require time to heal, pathogens can infect these sensitive tissues before healing is complete. Our research aimed to answer several key questions regarding pruning wound susceptibility and protection and define management guidelines for almond canker diseases.

When is the best time to prune?

We investigated the seasonal differences in infection rate for pruning wounds made in September, October, November, December, and January, respectively. Field trials were conducted in the Sacramento and San Joaquin Valleys during the dormancy period’s in 2017-18 and 2018-19. Results from these trials revealed that infection rates were lowest when pruning cuts were made in January compared to pruning cuts made in September, October and November, which had higher infection rates. While wound healing typically occurs faster in warmer weather, previous studies on almond pruning wound cankers caused by Phytophthora syringae suggested that in January, substances (ex. lignin and suberin) associated with wound healing start to increase in production after declining during November and December. It is also important to note that in the absence of rain (ex. September 2019), pruning wound exposure to fungal inoculum is significantly reduced thus risks of infection are limited.

How long are pruning wounds susceptible to infection? 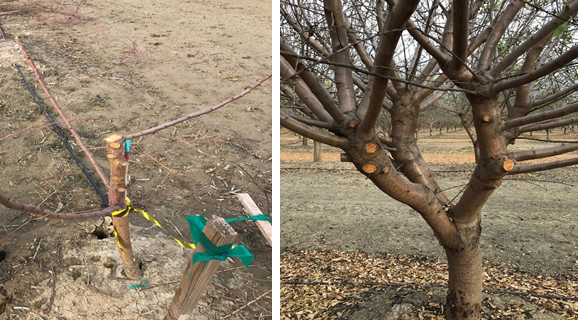 What products can protect pruning wounds from infection?

From 2016-2018, eight field trials were conducted to assess the efficacy of 26 different pruning wound protection products. These products included fungicides spanning various FRAC groups and premixtures, biocontrols, paint, and wound sealants. Findings suggested that Topsin M (thiophanate-methyl) provides excellent control in protecting pruning wounds, reducing infection by 82% overall. A biological control product consisting of the fungus Trichoderma atroviride was also highly effective, reducing infection by 77% overall. Currently, this biological control product is being considered for registration as a pruning wound protectant against almond canker diseases in California. The performance of acrylic paint was inconsistent, and overall only reduced canker pathogen infection by 45%. Topsin M has a 2(ee) recommendation for use as pruning wound protectant on almonds in California. Conventional fungicides may be applied at the label rates with an air blast sprayer, ensuring complete coverage of pruning wounds.

But what about orchards with established canker diseases…

While labor-intensive and time-consuming, remedial surgeries or removal of dead or diseased branches can be performed to remove infected tissues. This practice requires making sure to cut several inches into the healthy wood to remove all the infected parts. For Ceratocystis cankers, clean up the area around the infected tissue by removing loosened bark and exposing the cambium to promote callusing (a wound healing response). Diseased or dying limbs should be removed as early as the infections are detected to avoid further spread of the disease into the trunk. Of course, all pruning creates a potential entry point for canker disease fungi and the same rainfall avoidance and wound protection care made with other pruning activities should be followed with removal of dead or diseased branches.