Effectively reducing weed populations in orchards requires persistence and investment in controlling weeds before they set seed. Conversely, a year with poor weed control can result in lots of seed set and heavy weed pressure for several years into the future. Large weeds can compromise the following year’s weed control by interfering with herbicide spray patterns and holding leaf litter in place that can shield new seedlings from later control measures (Figure 1). Think about weed management over a multi-year timeframe. Here are a few thoughts and reminders about building an effective weed management program.

Identification. Weed species identification is critical for accurate selection of both preemergent and postemergent herbicides. While most growers and PCAs have a good idea of what is growing in the orchard but weed populations can change over time. Monitor weeds twice a year; in the fall to identify summer species that were not controlled and newly emerging winter species, and again in the late spring to identify winter weeds that were not controlled. One simple, free resource for identification is the Weed Identification Tool at the UC Weed Research and Information Center.

Timing. Properly applying herbicides is just as important as picking the right one. Many weeds become difficult to control once they have reached a certain size or reproductive stage. Some materials are not easily translocated in the plant, while others are dependent on movement into the soil by either rain or irrigation. In either case the materials need to be applied according to the manufactures recommendation if they are to perform as expected. If your tree rows are covered in leaves and debris, blow them clean before application of preemergent materials. If your nozzles are old and worn, replace them. The cost of replacing your nozzles will be much less than the cost of repeated ineffective applications and other problems associated with poor weed control.

Herbicide Resistance. Some of our current weed management challenges in orchards are related to herbicide resistance, particularly resistance to glyphosate. Glyphosate (e.g. Roundup) has been the backbone of postemergence weed control for years because of the broad weed control spectrum and economical price. Unfortunately, reliance on a single mode of action herbicide has led to selection of several broadleaf and grass weed populations able to survive glyphosate in orchards. When building your weed management program, consider herbicide rotations, tankmix combinations, sequential treatments, and incorporation of non-chemical strategies to control current resistant populations and minimize the risk of future cases of resistance. 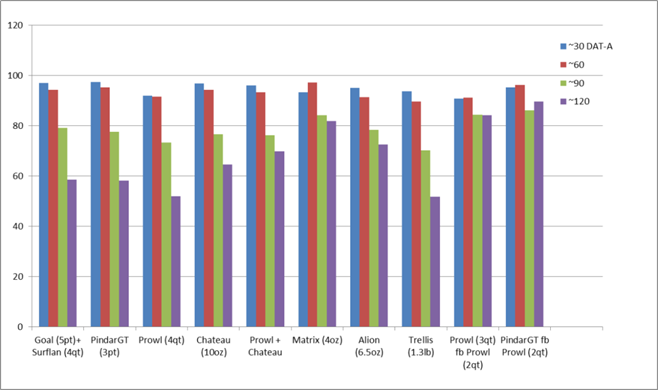 Figure 2. Overall weed control ratings from five large-plot nut orchard trials in 2013 and 2014. Weed control was evaluated approximately monthly after an “A” timing in December or January; some treatments also had a “B” timing in March. Data are averaged over diverse sites including a Davis site dominated by winter grasses; two Wasco sites with junglerice and fleabane; Delhi with fleabane, geranium, and bluegrass; and Escalon with mixed grasses and broadleaves. The success of any treatment was largely dictated by the weed spectrum at that location, rainfall pattern following application, and the previous level of weed control at the site.

The primary drawback to preemergence herbicides is that they must be incorporated into the top layer of soil where weed seed germinate, usually by rain or irrigation. With most of the commonly used preemergence materials, ¼ to ½ inches of water is recommended within a few weeks of the application for best results. However, even in 2013-2014 drought conditions, many of the preemergence herbicides worked surprisingly well despite several weeks on the soil surface with minimal incorporation. To maximize the impact of preemergence herbicides in the weed management program, consider a short irrigation set, if possible, if rain is not forecasted.

Tank Mixing and Sequential Applications. Use tank mixes or sequential herbicide applications to broaden the spectrum of weeds controlled and to reduce selection for resistant populations. Tank mixes can take several forms: preemergence and postemergence herbicides to control emerged weeds and provide residual control; combining herbicides with activity on grasses with other materials with broadleaf activity; or combining material with different modes of action but overlapping activity on weeds of concern for developing resistance (Table 1). 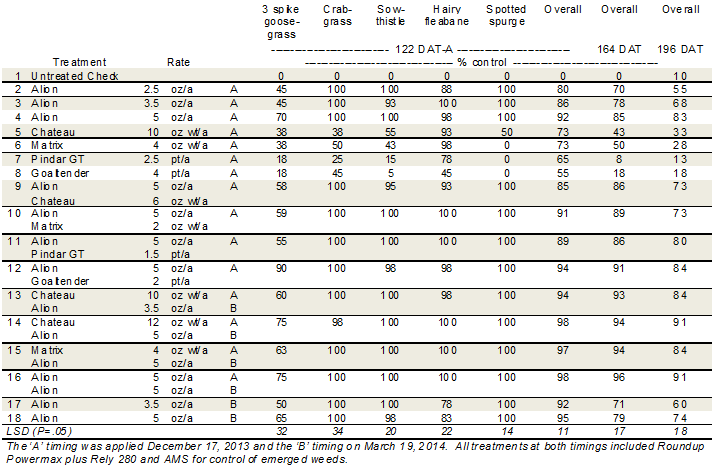 Table 1. Selected weed control evaluations from 2013-14 comparison of Alion and other preemergence tankmix and sequential partners in an almond orchard near Escalon, CA. All treatments included a high rate of Rely 280 and Roundup Powermax to ensure good control of existing weeds.

Manage Your Middles. Think about how you’ll manage vegetation in the “middles”. Many tree nut producers use strip applications of herbicides in the tree row and less intensive management of the vegetation in the “middles”, often mowing several times in the season followed by an herbicide treatment prior to harvest. This approach can work very well, but if the vegetation in the middles is made up of the same weeds you fight to control in the strips, the middles may be a continued source of weed seed in the strips. Weedy vegetation that is allowed to mature, even if repeatedly mowed in the middles, can be very difficult to control with herbicides later. For example, both hairy fleabane and three-spike goosegrass are very difficult to control with any available postemergence herbicide once they reach a reproductive stage. Light tillage, full floor herbicide treatments, and cover crops may all be options to consider for reducing weed problems in the middles. With the recent drought, weed management in orchard middles has been a recurring topic of discussion due to the water used by the weeds.

Follow Up. Follow up during the year with field scouting and cleanup operations. Any effective weed management program should be built on data, whether that data is actual weed counts and ratings or a manager’s mental assessment after walking or driving through the orchard multiple times during the season. Integrated weed management is not a once-and-done decision for an orchard; instead it should be fine-tuned based on what is working (or not) and what new problems are coming into the orchard. Additionally, field scouting provides an opportunity to identify and manage problems such as new species or suspected herbicide resistance while the problem is small and localized. Timely spot treatments or hand labor at the beginning of a problem could save a great deal of effort and expense later.