Threespike goosegrass was first reported in California in 1967. Since then, this species has become a significant concern in almonds and other orchard cropping systems throughout the Central Valley and growers have observed poor control with glyphosate. Tufted perennial grasses such as threespike goosegrass are particularly problematic during the first four years of tree nut establishment due to their ability to reduce tree growth by competing for water, nutrients, and sunlight. Thick stands can also interfere with the distribution and uniformity of irrigation and once the trees reach fourth leaf, established plants can reduce harvest efficiency by making it more difficult to recover nuts from the orchard floor at harvest.

Threespike goosegrass is a low-growing, coarsely tufted, warm season perennial grass, which has a prominent fold at the mid rib in young leaves that flatten when mature. The most distinguishable attribute of this species is its finger-like spikes (digitate inflorescence, Fig. 1, left). This species is often misidentified due to its common name and for being closely related to the highly successful invasive, goosegrass. However, there are some major phenological and morphological differences. Goosegrass is a large stature and erect annual with larger spikes, generally having five to eight spikes which are 1.5 to 6 inches long (Fig. 1, right). Threespike goosegrass is a low-growing tufted perennial that has a more compact inflorescence and fewer spikes (two to four) which are shorter, typically 0.4 to 1.2 inches.

When selecting an integrated weed management strategy for this species, options may vary from orchard to orchard and may be influenced by geographic location, climatic conditions, soil texture and profile, irrigation practices, topography, cost, and grower preferences. A good orchard weed management program is composed of preventative strategies, orchard floor management (including cultural, mechanical, chemical, and biological methods), and weed monitoring. The proper use of pre- and postemergence herbicides and timely discing and cultivation are important factors in weed management.

For this study, two field trials to evaluate the performance of several pre-emergent (PRE) and post-emergent (POST) herbicides on threespike goosegrass were conducted in 2018: one in a walnut orchard at the Chico State University Farm in Chico, CA and the other in a commercial almond orchard near Livingston, CA. Both locations had medium-to-high infestations. Herbicide treatments were applied with a CO2 pressurized backpack sprayer, calibrated to deliver 30 GPA at 30 PSI through three TeeJet XR11003 flat fan nozzles. The herbicide treatments (Tables 1 & 2) were applied in a five-foot band on both sides of the tree row.

Data collection included visual assessments at monthly intervals for PREs, starting one month after the January 2018 application and continued for five months. One treatment included an additional PRE-application in March as part of a sequential herbicide program. The purpose of this sequential approach was to apply a second PRE-herbicide closer to germination and emergence of this warm season grass, rather than relying on a single winter application. POST treatments were applied in May 2018 and control assessments were conducted at weekly intervals, starting one week after application for approximately one month. Threespike goosegrass control was estimated using a 0 to 100 scale, where 0 means no control and 100 means plants were completely killed.

Multiple PRE herbicides (Table 1) in these trials, including Alion, Prowl H2O, and Pindar GT provided adequate control of seedling threespike goosegrass. The greatest control of this warm season perennial was obtained with the sequential application of Alion followed by Prowl H2O, presumably due to the second PRE-herbicide applied late March closer to germination and emergence of this warm season grass, rather than relying on a single winter application. Results from this study suggest that a management plan utilizing a PRE-herbicide applied later in the spring may minimize seedling recruitment of this species. 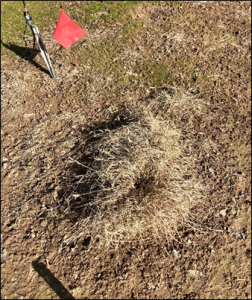 Overall, the field trials conducted in this study determined that in areas where this warm season grass species was the most concerning, the greatest control was obtained by shifting some of the PRE herbicide components to target the germination of the summer species, rather than trying to achieve summer weed control with only the PRE herbicides applied in the winter. We also found a number of effective post-emergent herbicides to keep in the toolbox. 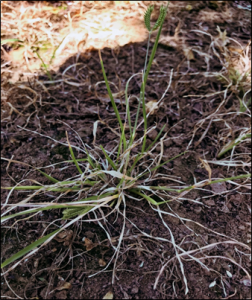 The take home messages here are to carefully consider the biology of the weed, weed control goals, and the weed management tools at disposal. Remember to rotate herbicide modes of action and to monitor after herbicide application to prevent the appearance of herbicide-resistant or tolerance, such as the high level of tolerance exhibited by threespike goosegrass to glyphosate treatments shown in this study. You can find more information on these subjects at the links bellow: