A good understanding of the soil variability patterns is essential to optimally design and install a zone irrigation system. Rapid, non-intrusive methods of measuring soil electrical conductivity combined with global positioning systems (GPS) are used to map the soil variability patterns and provide waypoints to guide the design and installation.  Figure 1 shows a simple example of electromagnetic induction (EM). Each EM instrument contains two electronic coils, a primary and secondary coil. When energized, the primary coil radiates an electromagnetic field through the soil to the secondary coil. The electrical conductivity of the soil is measured to a depth of about 3 feet with this model of EM instrument.  Other models can measure deeper. 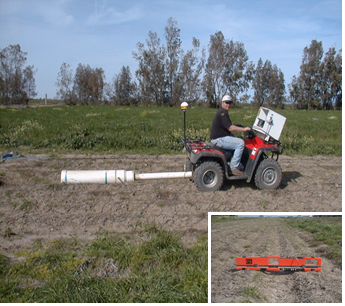 Figure 1. Two EM instruments are housed inside a PVC casing and towed behind an ATV with GPS system. The inset shows the orientation of the two instruments inside the PVC housing. One is horizontal (shallow) and the other is vertical (deep) mode.

Figure 2 shows an example of a four-probe resistance sensor (VERIS) that can also be used to map soil variability.  It also measures electrical conductivity of the soil.  A pair of coulter electrodes penetrate a few inches of the soil surface and inject an electrical current.  Another pair of coulters receives the electrical signal.  The measure of voltage drop due to the resistivity of the soil is measured.  The distance between the pair of coulters determines the depth of measurement.  In this photo the measurement depth is about three feet.  Wider spacing measures deeper soil depths.  GPS is also used to track the position in the orchard.  UC research published in 2010 documented that well trained and experienced commercial operators of EM and VERIS sensors can accurately map and define the soil variability in a parcel of land (Fulton et.al., 2010). 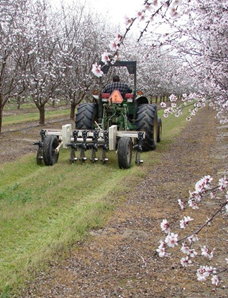 Figure 2. VERIS instrument being towed through an existing almond orchard. 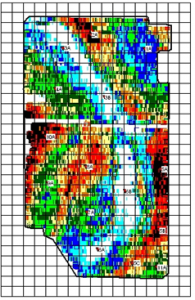 It is important to understand that the variability map only indicates where contrasting soils are located and provides a sense of the spatial pattern.  The map does not indicate the source of variability.  Further investigation using backhoe pit evaluations and soil sampling, directed by the EM or VERIS data, are necessary to understand the nature of the variability.  Electrical conductivity is most sensitive to soil moisture content and soil salinity.   Since most land in the Sacramento Valley where almonds might be grown consists of non-saline soils, both the EM and VERIS methods have been used effectively to distinguish soil patterns with distinct differences in texture, structure, and water-holding capacity.  Variation caused by soil moisture depletion can be reduced if the mapping is conducted in the late winter or early spring following the rainfall season when soils are at field capacity.

Future of Zone Irrigation Systems. Zone irrigation systems are among many options available as the almond industry strives to produce more crop with less resources.  Public sources of data evaluating almond production, water savings, economics, and other responses by implementing zone irrigation concepts are not readily available.  Anecdotal experience over time will verify its role and value.  At this time, the concept shows promise and is gaining in interest.