Most of our Nonpareils are already on the ground in the northern Sac Valley, but during a few recent orchard walk-throughs, I’ve seen some instances of hull rot on pollinator varieties.

Two species of fungi can cause hull rot: Monolinia species, or Rhizopus stolonifer. You may recognize Monolinia as a fungus that is also responsible for brown rot during bloom; while R. stolonifer is more generally known as bread mold. Monolinia causes tanish-lesions on the outside of the hull, while R. stolonifer looks like black, well, mold. 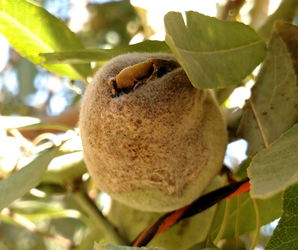 Tan lesions on the outside of the hull indicate Monolinia species. Photo: D. Lightle.

If you’re walking through your orchard, you may readily be able to pick out hull rot strikes by looking for flagging leaves and shoots (and, after harvest, stick-tights). The shoot dieback occurs because the fungus produces a toxin that kills the shoot at the point of the infected nut. The long-term impacts of hull rot in the orchard (other than the obviously infected nut) are decreases in future production because of reduced fruiting wood, and higher potential for NOW overwintering sites in the stick-tights. 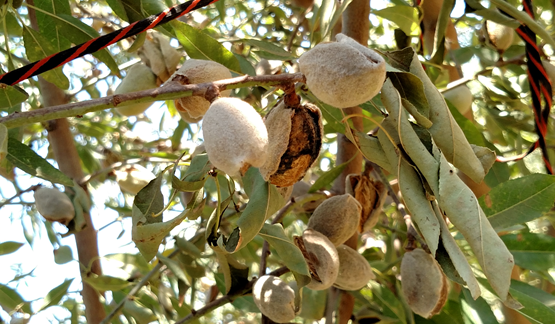 Flagging leaves and shoot death result from a toxin that the fungus injects into the plant. Here, the leaves are flagging because of a nut infected with R. stolonifer. Photo: D. Lightle.

If you’re seeing hull rot, it is most likely too late to do much about it now. Trees are predisposed to hull rot if they are high in nitrogen and have excessive water, while the infectious period is in an earlier stage of hull split. Infections caused by Monolinia need to be controlled culturally next year, while those caused by R. stolonifer can be controlled culturally and with well timed fungicides during next growing season. See this article for more information on variety susceptibilities, cultural control, and fungicide timing options. For now, if you’re seeing lots of hull rot strikes, make a mental note as to which species you are dealing with, as well as to come through later this winter and remove those stick-tights.