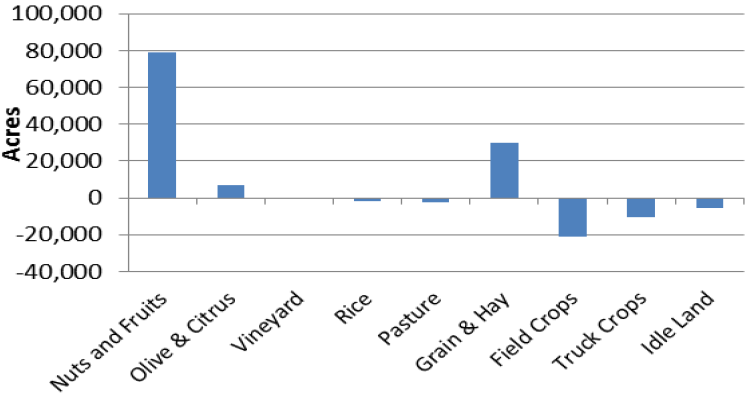 Change in irrigated agricultural land use from 2003-05 until 2011-15 in the northern Sacramento Valley counties of Shasta, Tehama, Glenn, Butte, and Colusa counties.

The acreage of deciduous nut and fruit crops and olive and citrus has increased about 79,000 and 7,000 acres respectively. Most of the increase in deciduous nuts and fruits is almond and walnut acreage. Increases in the olive and citrus category is primarily new acreage of high density olives for oil production while citrus has declined. Orchards are perennial crops so planting patterns are more “permanent” compared to annual cropping systems. Perhaps, less visible, the acreage of grains planted and grown in the fall and winter and hay also increased nearly 30,000 acres. Rice production, primarily in Glenn, Colusa, and Butte Counties, has remained relatively stable because of land and infrastructure unique to rice production. Irrigated pasture has also remained relatively stable in the five-county region. Agronomic row crops such as corn, cotton, seed crops, and some vegetable crops have declined a total of about 31,500 acres. In addition 5,500 acres of land that either had been idle or was previously rain fed has been put into irrigation production.

What has caused these changes in the cropping patterns?
There are many factors that contribute to the changes in cropping pattern, but the foundation for the expansion into almond, walnut, and high density olive begins with a growing consumer population and changing consumer preferences. Today, we live and compete in a worldwide economy and as a result there is a growing population that has changed its food preferences to healthier and a wider variety of foods. At the same time, medical research has demonstrated that almond, walnut, olive, and other crops grown locally are among the healthiest foods available (Sources: Almond Board of California, California Dried Plum Board, California Olive Oil Council, and California Walnut Board). They help reduce cholesterol and heart disease, lessen surges in blood sugar to manage diabetes, provide fiber that is important to managing weight, and improve bone health when included in the daily diet. These attributes have caused the consumer demand for these crops to generally out-pace the capacity to supply them and as a result crop prices have been relatively strong over the past decade to encourage expansion. This coupled with the fact that northern Sacramento Valley climate and soil and water resources are well suited to grow these crops has led to increased production. 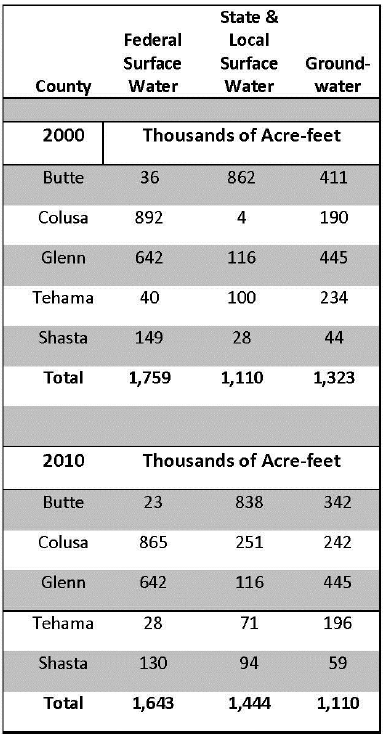 When surface water supplies in these areas are less than the irrigation demand, groundwater is used to supply the shortfall. In areas outside of the surface water service areas, groundwater is the only source of water for irrigation. In addition, groundwater is the primary water resource available to supply a large majority of domestic and municipal water demands for the northern Sacramento Valley, which are also included in the above table. Total federal, state, and local surface water and groundwater resources used in 2010 were 5,000 acre-feet higher than in 2000 which is a 0.1 percent increase in water resources. Meanwhile, during approximately the same period of time land use surveys from 2003-05 to 2011-15 show that total irrigated acreage in the northern Sacramento Valley counties increased 73,000 acres or about 8 percent. Domestic and municipal demands for water also increased as population grew. This affirms that agricultural and urban water users are achieving higher water use efficiency and enabling economic growth with very small increases in total demands for water resources.

How much each source of water supplies the demand is highly variable among the five northern Sacramento Valley counties. Tehama County relies the most on groundwater followed by Glenn and Butte counties. Reliance on groundwater is not as great in Colusa and Shasta Counties.

Over time, northern Sacramento Valley agriculture has invested more in groundwater resources. Unreliability of surface water has contributed to this investment to assure water is available for perennial tree fruit and nut crops. Reliability concerns have resulted from dry hydrologic cycles and more demands on surface water supplies for fisheries and wildlife habitat. Groundwater is available on demand by turning on a pump. Whereas, some water districts do not have conveyance systems that can deliver water on demand. Many water districts are working to modernize their conveyance systems to accommodate on-demand delivery of water for low volume, high frequency drip and microsprinkler methods that produce food more efficiently. Furthermore, surface water is generally higher in sediment and biological contaminants that can plug low volume drip and microsprinkler irrigation systems and it does carry bacteria and fungi that can influence crop and plant health, leading to a preference for groundwater. However, these surface water concerns can be managed with improved filter systems and water treatment. Selecting and planting rootstocks and varieties with improved tolerance or resistance to diseases can also help manage these concerns. If more surface water were available more reliably, agriculture would welcome it to reduce the demand on groundwater and sustain the overall water supply water.

A special thanks to the California Department of Water Resources Northern Region and Associate Land and Water Use Scientist, Mark Rivera for summarizing the Department’s land use surveys of the northern Sacramento Valley. Without their dedication to conducting manual field surveys this article would not have been possible.