Missing the Target: Why you Should Irrigate Potted Trees Directly onto Potting Media

Generally, when I am working with growers on a problem related to potted-tree establishment, the cause is lack of water movement into the potted media, creating tree stress. This results from the difference in soil particle size at the boundary between the orchard soil and the tree’s potting soil. When you plant a potted tree in your orchard, it has a substrate – some mix of peat and vermiculite – that is very different than your soil type. The change in texture and pore size inhibits water movement from the surrounding soil into the potting media. As a result, irrigation water applied outside the potted soil media isn’t getting to the roots.

The sequence of photos in Figure 1 demonstrates this phenomenon. I set up a mock orchard condition with soil (Tehama series silty loam) next to a potted tree (potting soil) in a ½ inch wide frame. I then slowly added water to match the soil infiltration rate, similar to a drip emitter, approximately 4 inches away from the potting soil in the ‘orchard’ soil. 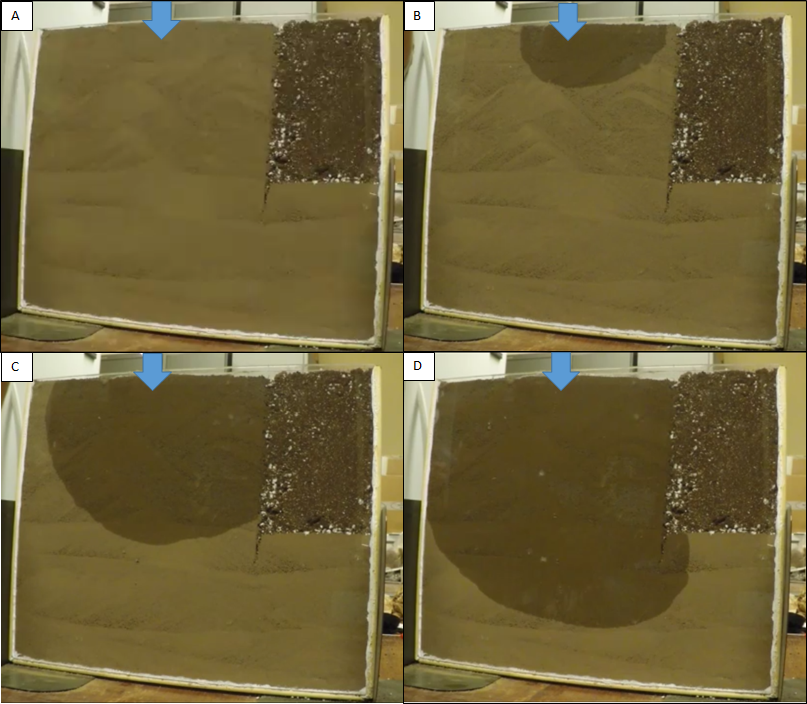 Figure 1. This sequence of photos show the movement of water applied to Tehama series silty-loam soil. Water was applied at the blue arrow, approximately 4 inches from the potting soil. Total elapsed time was 51 minutes. Water moved downwards and laterally, but did not cross the boundary into the potting soil.

For about the first month of growth, irrigation emitters should be located at the base of the potted tree to ensure the potting medium receives water. Frequently check to ensure that the potting soil stays wet – not the soil somewhere else in the tree row or mound – before, after, and between irrigation sets. The best way to do this is with a small trowel and your hands. Water will need to be applied at the base of the tree until the tree roots grow beyond the potting soil and into your orchard’s native soil. The time required for this to happen will vary depending on factors such as temperature, but it should take roughly a month.

For more detailed information on this topic, see our article on Potted Tree Irrigation after Planting: Getting the First Year Right.