As consumer demand for orchard crops has increased and land with deep, well-drained soil has become scarce and more expensive, production has expanded to more marginal soils.  These lands often consist of soils with more variability in depth of profile, texture, structure, and water holding capacity.  They may also vary in topography, field slope, salinity, and fertility.

Drip and micro sprinkler irrigation have been critical to successfully growing on marginal soils.  These methods of irrigation enable water to be applied more uniformly from tree to tree in an orchard in timely, small volumes that are retained better within the tree root zone.  Nitrogen and other nutrients that are essential to healthy trees can also be applied with the irrigation water in properly timed, small amounts that closely match tree uptake.

However, even with micro irrigation and fertigation, potential yield can be lost when variable soils are managed using the same irrigation and fertigation timing and rates.  For example, results from an almond orchard evaluation at Nickels Soils Laboratory near Arbuckle, CA suggested there may be potential to increase long term average almond yields by 400 to 1000 lbs/ac/year across 87 percent of an 22 acre orchard, if it were possible to understand the nature of the soil variability and implement an effective strategy to manage it (Fulton, et. al., 2010).  Variable soils contribute to irregular patterns of crop water stress and in turn more variable crop development and pest problems over the course of a season.  Some examples include mite population growth and control, hull split development and navel orange worm control, and non-uniform nut maturation and harvestability.

One concept to irrigating highly variable soils that is gaining some adoption in the Central Valley of California is zone irrigation.  Some may consider it a form of variable rate irrigation.  Zone irrigation is being used in some orchard settings in the Sacramento Valley where changes in topography are gradual and variability in soil profile depth, texture, structure, and water-holding capacity exists.

With traditional irrigation designs, more than one soil type may exist within the same irrigation set.   With extreme soil variability, the manager may be challenged to determine the ideal irrigation frequency and duration due to the wide range in water infiltration rates and water holding capacity of the soils.

Within reason, zone irrigation systems are designed to account for the natural variability of the soils in a parcel of land.  Areas that have similar soils (depth, texture, structure, and water-holding capacity) are grouped into irrigation zones. A manager has more flexibility to adjust irrigation frequency and duration to match the soil characteristics.  An orchard (40 to 80 acres) with zone irrigation may consist of three or four zones to keep the design reasonable.  Figure 1 shows an 80 acre almond orchard where a zone irrigation system has been implemented. 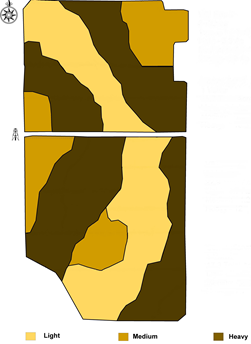 Figure 1. Illustration of an actual zone irrigation system in an almond orchard grown in the northern Sacramento Valley.

The irrigation zones vary in acreage so a variable frequency drive to regulate pump flow and pressure is an essential part of the irrigation system.   With zone irrigation designs, the underground pipeline conveyance design is modified to deliver water to the above ground drip or micro sprinkler system where it is needed and at the appropriate flow rates.  The above ground lateral lines are cut to lengths needed to match the variable soil patterns.  The same drip emitter, micro sprinkler, or mini sprinkler is used across the entire orchard to ease maintenance and repair of the system and avoid any potential confusion with replacing plugged or damaged parts.  To date, commercial installation of zone irrigation systems appears to cost about $200 to $300 per acre more than traditional designs.