Preparing for an early freeze

Fully dormant walnut trees are a relatively frost tolerant crop. Fully dormant mature trees can tolerate temperatures to the low 20’s (°F) or below, according to retired UC Cooperative Extension (UCCE) Farm Advisor Wilbur Reil. Reil observed that for walnut trees to fully acclimate and withstand severe freeze events, the first few frost events in autumn should have lows near 32° F, or just below. However, if the first one or two freeze events have lows down to around 28° F, damage will likely ensue.

Bringing trees into full dormancy is a challenge for young trees, which can be pushed to continue vigorous growth late into the season. According to retired UC Davis Biometeorology Specialist Richard Snyder, new plant growth is more frost sensitive because this tissue has fewer accumulated solutes in the plant cells compared to older tissues. These accumulated solutes play a similar role to antifreeze in vehicles.

Growers can reduce damage risk by stopping their trees’ autumn growth well before the first freeze and using management strategies in the days before and after a damaging freeze event takes place. Preparing for a freeze begins with reducing and stopping the autumn growth of young vigorous trees (photo 1). This is accomplished by finishing the nitrogen fertilization program by the end of August. 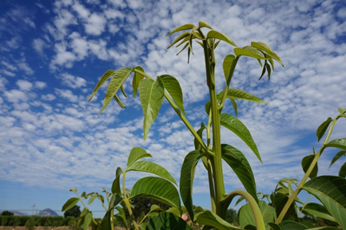 Next, withhold irrigation beginning in mid-September until a terminal vegetative bud has formed on the trunk (photo 2). Once the terminal vegetative bud has set by mid- to late-October, another irrigation can take place if there has been no rain. A mid- to late-October irrigation should prevent premature defoliation, should not push new growth, and will moisten the soil. Preventing the soil from drying out with periodic irrigation is a critical frost management strategy in November and December if significant rain has not fallen. Richard Snyder recommends irrigating dry soil three to five days before a forecasted severe frost (avoid saturated conditions or surface water). Snyder notes that soil moisture in the top foot of the profile on bare ground allows for increased heat storage from radiation during the day. 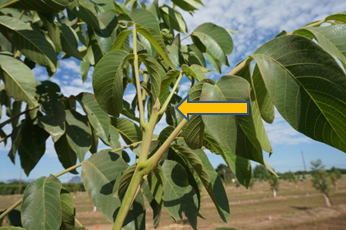 The final step to consider in managing severe frosts is painting. In 2014 and 2015 throughout the Central Valley, uneven bud break was associated with painted trunks, therefore until UC researchers determine how paint affects tree carbohydrates and bud break, we recommend painting tree trunks on young trees after a severe frost event. If temperatures drop to 28° F or below, cut into young tree trunks looking for any discoloration of the cambium on southwest facing surfaces (photo 3). 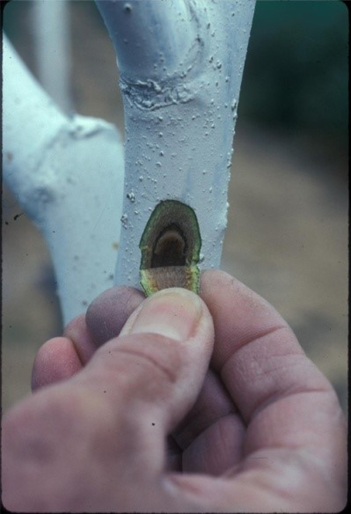 Photo 3. After a severe freeze event cut into the southwest facing trunk, looking for dark brown discoloration of the cambium.

If brown discoloration is noted, consider painting with a 50% diluted paint (1:1 water to white interior latex paint), focusing on the southwest facing trunk surface. Painting should be done as soon as possible after the injuring freeze event. In 2000, Wilbur Reil painted trunks of young Tulare trees to seven feet, eight days after a severe frost event (26° F). Of the trees that were painted 18% sustained damage, whereas 46% of unpainted trees were damaged. The reduced trunk damage from painting after a severe freeze is likely due to sunburn prevention.