Can you identify an ant by its mound? Of course, it’s better to base IDs off of the ant specimen itself, but for the more entomophobic among you, ant mound ID may sound like a fantastic alternative.

I received the following photo of an ant mound from an almond orchard, with the sender questioning whether they should be concerned: 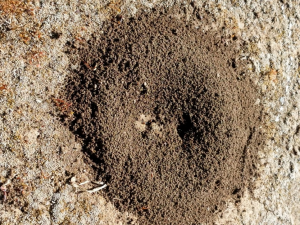 Ant mound from an almond orchard.

Of the many ant species that may be found in an almond orchard, in the Sacramento Valley there are two main species of concern: pavement ant and southern fire ant. Both these ants may cause damage by feeding on almonds drying on the ground during harvest. However, if you have one of these two ant species, baited control needs to begin sooner rather than later to get populations under control by harvest season. If the density is high enough, treatments should be timed for late May and mid-June.

Other non-pest ant species that may be present in an orchard include pyramid ants. The UC IPM website actually lists pyramid ants as a beneficial species, though when I asked UC IPM advisor Kris Tollerup for further details, he indicated they were out there “just doing their ant thing” – I’ll leave it up for you to decide how beneficial that is.

Enough about ants, let’s go back to mounds. Researchers from the Research Center on Animal Cognition (Toulouse, France) have found that ants follow three main rules when it comes to moving soil for mound construction: an individual ant picks up a grain at a constant rate (e.g. 2 grains per minute); they prefer to drop them off near other grains; and they preferentially pick up grains that have been moved by other individuals (possibly because they are marked with pheromones). Consequently, the mound configuration tends to be relatively consistent between different colonies of the same ant species.

According to Kris Tollerup, it is feasible to get a rough identification of your ant species based on the mound because the species colonizing almond orchards tend to have somewhat distinct mounds. 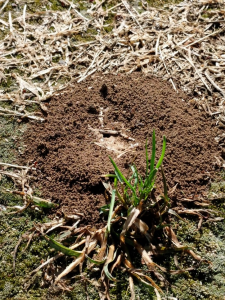 A second ant mound from the same almond orchard.

Kris put a tentative identification of this mound as the pyramid ant. This mound is distinctive from the two species of concern (pavement ant & southern fire ant) because it has only one opening into the nest, as opposed to multiple hills or openings clustered together. However, he cautioned that if the photographer had zoomed in very closely to take this photo, they may have left the nearby openings out of the frame. 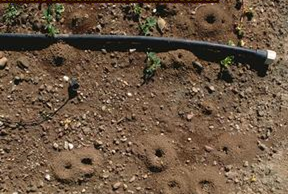 Kris suggested another way to verify the ant ID – squish it and take a sniff. The pyramid ant has a pungent smell reminiscent of citronella. Although if you dislike ants to the point of not wanting to identify it with a hand lens, smelling ants may not sound like the best alternative…