Photos from the Field: Identifying Damage from Deer Mice in Almond Orchards

Deer mice (Peromyscus spp.) are rarely a problem in orchards in California, but when present they can cause damage to irrigation lines and nuts in almond trees. On a recent farm call with Roger Baldwin, UCCE’s Wildlife Specialist, we diagnosed signs of a substantial deer mouse population that was creating holes in drip lines (Figure 1 & 2) and eating nuts in the trees the previous season (Figure 3). 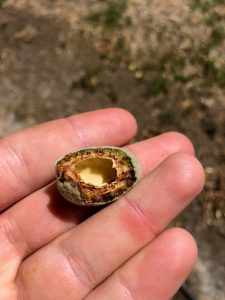 The mice were taking advantage of cracks in the shrink-swell soil to more easily create their burrows (Figure 4). As more orchards come into bear on these shrink-swell soils, especially orchards with drip irrigation, which can exacerbate the cracking in the orchard middles, I would not be surprised if we see more of this pest. Deer mice share some similarities with voles (Microtus californicus), which can make them tricky to diagnose as the source of problems. Once diagnosed, management can be complicated because rodenticide use for deer mice can be limited in seasonality. 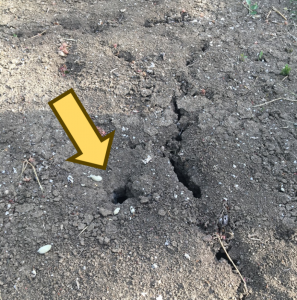 Deer mice are similar in size to meadow voles, and have similar sized burrow openings (around 1.5 inch diameter) (Figure 4). However, there are numerous differences in the biology and habits of deer mice and voles that can help diagnose which rodent is causing damage in your orchard (Table 1). Both may cause chewing damage on irrigation lines. Otherwise, deer mice damage is largely focused on nuts, whereas vole damage is most concerning on young tree trunk bark. Deer mice populations, when problematic, build up within an orchard over time, whereas many voles may migrate into an orchard at once. Vole populations generally grow much faster than those of deer mice because they have more young per litter, more litters per year and female voles can reproduce at an earlier age than female deer mice.

If you’re unsure whether you are seeing damage from mice or voles, you can use a mouse-sized snap-trap to catch the damaging rodent in order to identify the species you are dealing with and to determine the best management strategy. 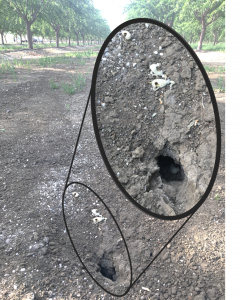 Depending on whether the crop is bearing or non-bearing and the time of year, first generation anticoagulants chlorophacinone and diphacinone and the acute toxicant zinc phosphide may be available to manage deer mice populations. Certain broadcast products can be used after harvest and during the dormant season, whereas rodenticides can only be used through elevated bait stations during the growing season in bearing orchards. Follow all label directions. Dr. Baldwin’s resource, Managing Roof Rats and Deer Mice in Nut and Fruit Orchards has more detail about different rodenticide products and the design of elevated bait stations. Deer mice have a small range of 0.25 to 4 acres, so bait stations need to be closely spaced, around 100 feet apart, to ensure that each deer mouse will have access to at least one bait station in its home range.

To assess treatment efficacy, Dr. Baldwin suggested using non-toxic wax monitor blocks, 100 blocks evenly spaced throughout the orchard. Leaving these blocks for two days and then counting feeding damage on the blocks before and after rodenticide use will help gauge how efficacious the treatment was.

Deer mice can spread the virus that causes Hantavirus Pulmonary Syndrome, a potentially fatal disease to humans. The virus is transmitted when aerosolized saliva, feces or urine of infect deer mice is inhaled. Thus take care when maintaining bait stations to open them while standing upwind of the station.