Maximizing walnut quality to improve value in a low-price year

The overall value of a walnut crop is based on yield and nut quality. Commodity prices are depressed, improving nut quality may be the determining factor influencing orchard profitability. Irrigation management is the single most important factor that can be adjusted for increasing kernel size and improving kernel color, two key components of quality. Nuts with a larger kernel size and lighter color pellicle (outer coating on the kernel) garner the highest prices in the market.

The most important irrigation management decision of the season is when to start irrigating in spring. Initiating irrigation too early in the season has been shown to predispose trees to stress at harvest. UC research trials have demonstrated that withholding irrigation until trees reach a midday stem water potential about 2 bars below the fully-watered baseline is best for maintaining overall tree health and higher edible kernel weights after crackout, which favors a higher price per pound. When irrigation was initiated earlier (at the baseline or 1 bar below), the trees exhibited more stress later in the season when irrigation was cut off in advance of harvest. The pressure chamber is the best tool for determining when to initiate irrigating in the spring and should be used throughout the season to schedule irrigation events based on plant stress. The pressure chamber can be used to directly measure midday stem water potential on a subset of trees in an orchard. A number of short articles detailing how to utilize the pressure chamber in walnuts, almonds, and prunes can be found here. 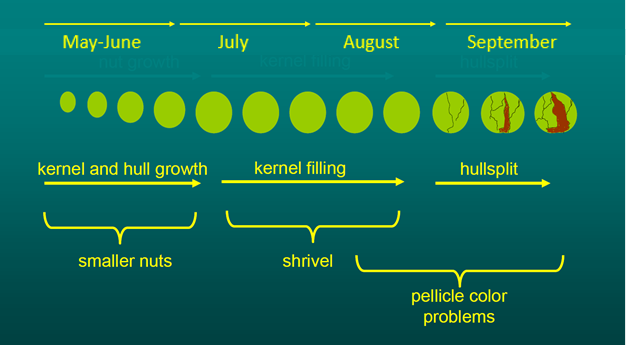 UC research trials have shown that carbohydrate deprivation can cause darkening of the kernel pellicle. It can result from either excess or lack of water, as well as from shaded conditions in the inner canopy, which itself is exacerbated by either water deficiency or excess. The influence of carbohydrate deprivation on nut quality varies over the season; the diagram below characterizes the symptoms on Chandler at different phases of nut development and highlights the importance of irrigation management at all times during the season to maximize nut size, nut fill, and quality.

Historically, dark kernel color has been associated with water-stressed trees resulting from under-irrigation. However, more recent research has shown that it is now most often associated with trees maintained either close to or above the fully watered baseline (more wet) in mid to late summer. These studies indicate that optimal kernel color can be achieved by maintaining orchards at a midday stem water potential of approximately 2 bars below the baseline (more dry) during mid- to late summer. 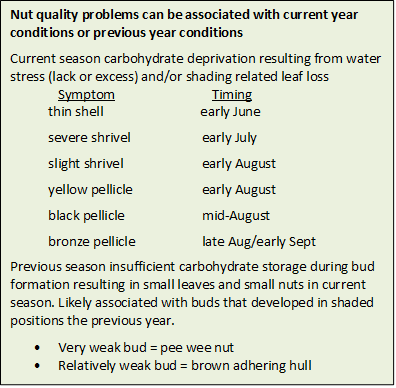 Conclusions. Howard and Tulare are very sensitive to pellicle color problems resulting from carbohydrate deprivation derived from either poor irrigation management or shading. Chandler is relatively immune to these problems. Maximize your profits by paying attention to water management at all times during the season. Early-season stress can result in reduced nut size while stress later can result in kernel shrivel and pellicle color problems.