Photo 1. In the past five to six years there have been increased reports of walnut mold. Right photo: stained regions on the kernel are covered by loose mold mycelia. Photos courtesy of Dr. Themis Michailides.

What is walnut mold?

Growers and processors have reported elevated mold levels in harvested walnuts to farm advisors, which has resulted in pathology sample submissions to Dr. Themis Michailides, UC Davis Plant Pathologist (Photo 1). Although Botryosphaeria and Phomopsis (BOT) can cause walnut mold, most walnut mold develops from Fusarium and Alternaria species. Furthermore, walnut mold spray timing is later than BOT prevention spray applications and therefore your fungicide program for BOT will not control mold. Walnut mold does not begin to develop until the hull completes maturity and begins to split, long after most BOT-controlling sprays have been applied. Before these alerts and ensuing research, not much was known about managing mold in walnut.

Because of increased mold reports, the California Walnut Board has funded Dr. Michailides to investigate the management of walnut mold. Although all possible predisposing factors have not yet been investigated, conditions that compromise the integrity of the hull, such as walnut blight, sunburn or insect-damage can serve as an entry point for mold fungi.

Secondary walnut blight (Xanthomonas arboricola pv. juglandis) infections that do not penetrate to the kernel nor result in nut drop, can create an entry for not only moth pests, but for the mold caused by Fusarium and Alternaria species. These infections are a specific type of walnut mold called brown apical necrosis (BAN), named because the black blighted lesions at the apical end (aka: stylar – floral remnant) of the fruit, that turn brown following fungal colonization (Photo 2). As the fungal infection expands under the hull, the hull is decayed and the infection spreads to the kernel, most likely through the apical end. It stands to reason that improved walnut blight management, particularly of secondary infections, will lead to less BAN although this has not yet been studied. More on walnut blight best management practices in our article on Walnut Blight Management. 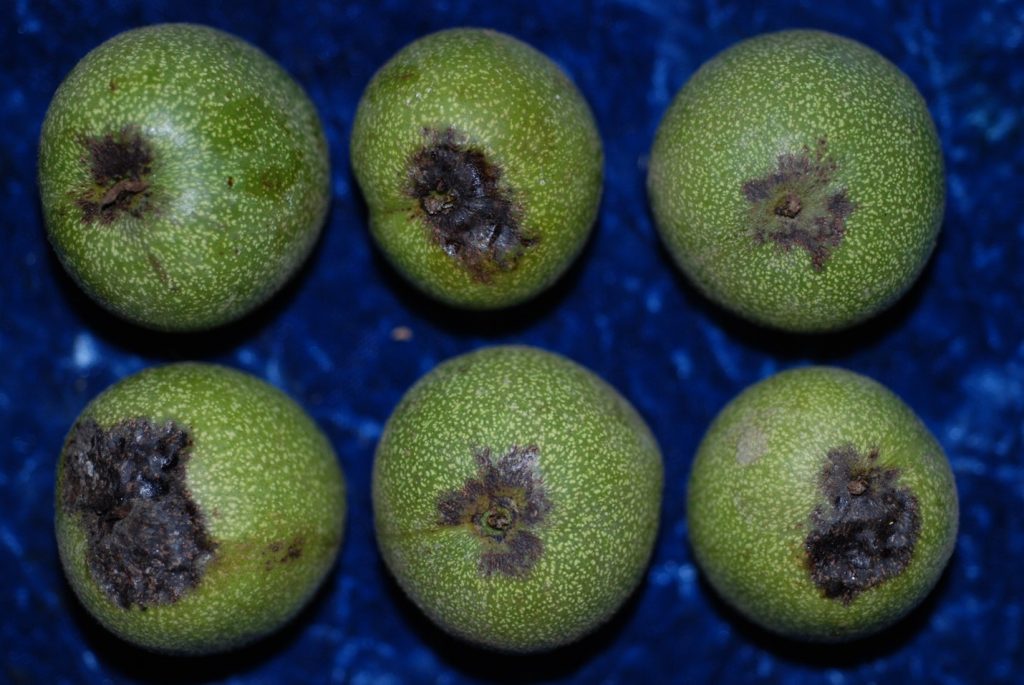 Practices that help maintain hull integrity are part of the pre-hull split management of walnut mold. One predisposing factor is sunburn, with mold commonly isolated from the sunburnt side of developing walnuts. Freeze damaged trees with less protective foliage are at high risk of sunburn and subsequent mold infection. Higher incidence of mold has also been found in insect infested nuts. Thus, controlling sunburn and insect damage will also help keep down mold infections. Finally, a critical management practice is timely shake and pick up. Bill Olson (UCCE Butte Advisor Emeritus) previously showed that mold and other quality problems increase the longer walnuts remain both on the tree and especially on the ground. Picking up the same day as shaking is a critical best practice for overall quality and grower returns, particularly for non-Chandler blocks.

Some varieties, such Ivanhoe and Livermore are more susceptible to mold than others, and therefore more diligent attention to mold management may be required. In earlier research, higher incidence of mold was discovered in walnut varieties with larger openings at the stem end and larger sized nuts.

A very large number of walnuts with mold were examined at a stage when the fungal mycelia had not covered the entire kernel. Using a dissecting scope, it was determined that for nuts collected from the tree, mold initiated at higher levels (3.5 fold) from the stylar end than the stem end (Figure 1). This finding made us think that some infections by the mold fungi might start at bloom time. To determine if this could be a cause, bloom spray trials were initiated this year. Please stay tuned for further research findings. 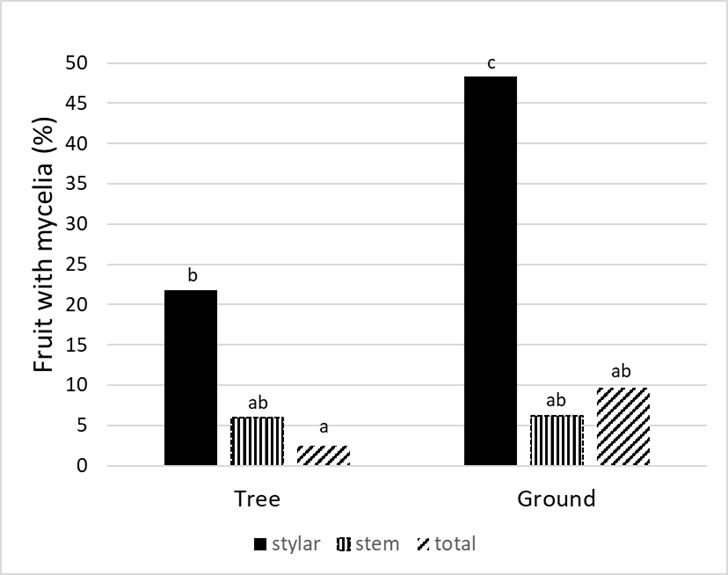 Figure 1. Walnut kernels of cv. Ivanhoe with mycelia initiating from stylar, or stem end of the fruit; “total” means that the entire kernel was covered with mycelia so that the origin of the mycelia could not be determined.

Results on fungicide trials to control walnut mold include those done in 2019 and 2020. In a 2019 trial in Chandler located in Butte County, the fungicide Rhyme (flutriafol) was tested because of its short preharvest interval (PHI). A single spray at either 30 or 60% hull split, reduced mold incidence by over 73%. In 2020, in the same orchard, two sprays with Rhyme, one at 3 weeks before hull split and the second at 20-30% hull split, resulted in 7% mold while the untreated control had 13% mold. However, this difference was not statistically significant. More efficacy testing of various chemical controls for walnut mold are planned and these results will be reported on UC IPM.

1Mention of pesticides and spray timings do not constitute a pesticide recommendation; it is merely the sharing of research results. Always follow the pesticide label and consult with your PCA.