Pruning with Bot Infections in Mind

Often in August, black to dark brown lesions (the blight phase) of Botryosphaeria or Phomopsis (Bot) infections start appearing on the hull from earlier, latent (symptomless) infections of the nut. Botryosphaeria can also cause cankers which can result from pruning wound infections and infections that move from blighted fruit or leaf scars into the spurs. 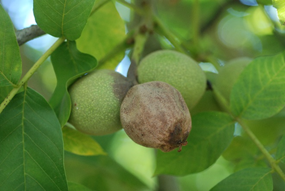 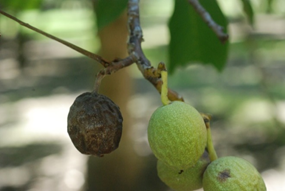 Therefore, if pruning or hedging is planned this year, aim for as early in fall as you can and when weather is forecast to be dry. Deadwood removal however, is best done through the dry summer months.