Bot background. Rainfall favors Botryosphaeria (Bot) and Phomopsis canker and blight of walnut when temperatures are over 50° F, so be alert to disease spread this spring and summer. Bot reduces yields by killing small fruit wood and large branches and directly infecting the nut. It is most obviously seen in walnut orchards as blighted shoots (dead branches with the leaves still stuck on), blighted twigs (dead, darkened and shriveled, Photo 1) and fruit with the entire hull blackened but still on the tree. Fruit can also have early season latent infections, but tissue death won’t be visible until late summer/early fall. The focus of this article is on 2016 Bot research findings. 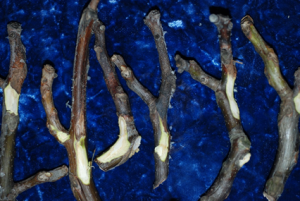 Photo 1: Spurs killed by Bot or Phomopsis. These will be evident during leaf-out. Photo by Themis Michailides

Spore types. Both pathogens (Botryosphaeria & Phomopsis) produce abundant water-splashed pycnidiospores and wind-borne ascospores. Practically-speaking, this means Bot can spread by spores dripping and splashing OR by blowing around in the orchard. Both spore types need water to trigger infection.

Conditions needed for disease. Bot infection requires susceptible tissue, presence of infective Bot spores, and the right environmental conditions – at least ¼” of rain (or irrigation water directly on susceptible tissue) and temperatures at or above 50°F. 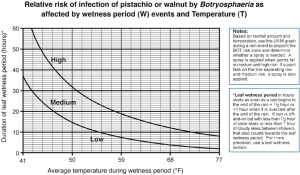 Figure 1 (Click on photo to enlarge). Based on rainfall amount and temperature, use this LWM graph during a rain event to pinpoint the BOT risk zone and determine whether a spray is needed. A spray is applied when points fall in medium and high risk. If a point falls on the line separating low and medium risk, a spray is also applied (see Figure 2).

Bot inoculum and brush disposal/spray scenarios: Chipping pruned wood reduces ability to cause infection by only two-thirds, so brush removal is still best option in light to moderate infected orchards. Always prune or hedge your more lightly infected orchards before moving to heavily infected ones.  Watch for rains and spray according to leaf wetness model if possible.