Walnut husk fly (WHF) has begun emerging earlier in the Sacramento Valley than it has historically. We are revising the timing of when to hang traps to the first of June instead of mid-June. Timing of control relies on monitoring adults with yellow sticky traps baited with ammonium carbonate lures. 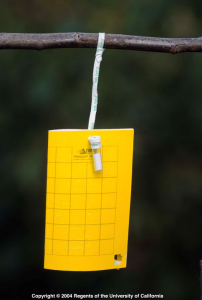 Because the commercial WHF trapping system was not accurately monitoring WHF population emergence in 2011, studies were conducted in 2012 and 2013 to examine the effectiveness of different commercially available traps and lures. This article summarizes the 2013 trap study and low volume insecticide application trials. See the Walnut Research Reports for more information on the performance of the various traps and lures, low volume sprays, and insecticide efficacy; or read here for information on WHF biology and spray timing.

A trial was conducted in a commercial (Payne) orchard in San Benito County. Eleven trap and lure treatments were placed about 6 feet above the ground. All traps were checked and trap positions were rotated within the block weekly to correct for position effects. Traps were placed in trees 27 June and were monitored until 11 September. Traps were changed either once a month, when traps captured over 100 flies, or when the yellow panel surface lost its stickiness. UC Super-charged lures were changed weekly and all other lures were changed every four weeks.

Since this is a summary article, only the data for the standard trap/lure and trap/lures found to be most effective are presented.

Table 1. Seasonal mean total female and male WHF captured in San Benito Co. – 2013 (only most effective traps/lures and standard are shown). Means followed by the same letter in a column are not significantly different (Fisher’s protected LSD, P<0.05)

Total trap catches – The AS-Alpha captured significantly more total WHF than AS-Mega and T-Carb while S-Sut was not significantly different from any treatment.

Other observations – We saw a decline in female captures of the population through the season that was also observed in 2012.

Studies were conducted in 2012 and 2013 to determine whether WHF control can be achieved with a new low volume technique (10 gal/ac using skip row) as compared to conventional application methods (100 gal/ac to every row).

Low volume spray studies: The 2013 trial was conducted in three commercial orchards in Linden (Vina), Modesto (Vina) and Rio Oso (Hartley). Three treatments were replicated once in each orchard. Each replicate was a minimum of 4 acres.  The grower selected the insecticides and attractant/feeding stimulate (Nu-Lure) for the experiment and applied each at the suggested label rate for WHF in walnuts. The three treatments were:

The GS treatment was applied with standard air-blast speed sprayer delivering 100 to 125 gal/acre and operating at 2 to 3 mph. The LV treatment was applied using modification of the standard grower’s speed sprayer. All but the top two nozzles were closed and the two top nozzles were replaced with ¼ in. barb adapters. The barb adapters provided two high-pressure, solid streams of toxicant that were directed toward one another to meet about 10 to 15 ft. in the air. Upon meeting, the fluid dispersed in large droplets. Air baffles were adjusted to direct the air-flow vertically, enabling the fan to drive the toxicant 40 to 50 ft. in the air before subsequently spilling back over the tops of trees. The output of the two nozzles was measured and paired with an increased tractor speed between 4 to 8 mph that produced the desired output (10 gal/acre). The speed was determined by the grower and was based on orchard floor conditions and grower and equipment safety. 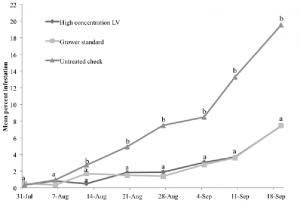