Clonal Paradox rootstocks are micro-propagated in a lab and then potted in a soilless potting medium. Because they are clones, they have the same genetic constitution. Clonal rootstocks are sold as potted unbudded rootstock or as nursery field grown rootstock, grafted or budded trees. 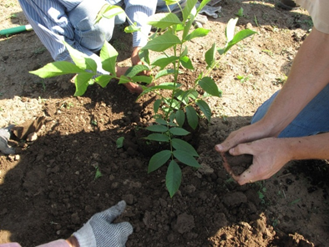 There are more planting time options than with bare root trees but more things to consider. Potential planting times depending on the stage of the potted plant are as follows:

Potted walnuts are easy to plant but the grower becomes the nursery. Hydration/irrigation must be watched very carefully. If planted in late fall or the dormant season, trees are subject to dehydration that makes them more susceptible to winter freeze damage unless it rains or you can irrigate. If planting dormant trees, it’s often best to plant in late February or early March after hard freezes are less likely. When planted in late spring, careful attention to irrigation is critical. 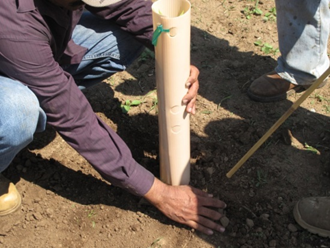 Placing a grow tube and bamboo stake over the rootstock. Photo: J. Hasey.

Irrigation: The first month after planting, the potting medium surrounding the roots cannot dry out until the roots have grown out into the soil. Once roots are out in the soil, keeping the potting medium hydrated is not quite as critical. Low volume drip systems work well or any irrigation system with directed water as long as it is applied with short, frequent irrigation intervals to keep the potting medium and the growing root system wet during the season. 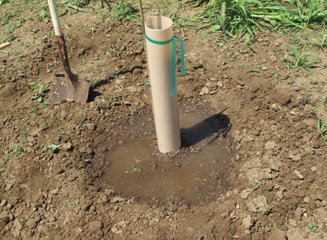 Budding or grafting: If irrigated properly, potted trees should grow well and attain adequate growth to fall bud trees in August. If not or for trees that don’t take the bud, they can be budded or grafted the following spring.