There are many considerations before planting a walnut orchard. One of the most important is determining the orchard design system and tree (between trees within-row) and row spacing. A planting design should provide the tree canopy with maximum exposure to sunlight and allow ease of equipment operation. Below is information to help decide between a standard spaced or hedgerow configuration, and to set spacing for optimum production.

How Canopy Light Interception Is Quantified

Using an ATV Mule equipped with a light bar for measuring midday photosynthetically active radiation (PAR). This measures ‘canopy light interception,’ essentially what percent of sunlight is being intercepted by tree leaves, and what percent is hitting the orchard floor. At harvest, nuts from the same area are picked up and weighed to correlate percent midday PAR (light) interception with yield. The pre-dominate variety in this multi-year study has been Chandler but some Tulare, Howard, Forde, and Gillet were also measured, mostly on Paradox rootstock. 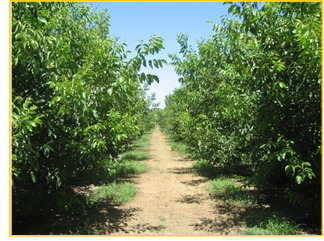 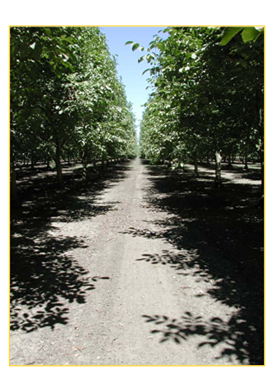 Putting This Information to Use

Chandler, a vigorous variety, predominates in the walnut industry. In this canopy light interception and yield study and a previous study in the 1990s comparing hedging intervals in a Chandler hedgerow, results indicated that it takes 3-4 years to redevelop the complexity of branching that existed before hedging. Therefore, production will be lost for the first few years after hedging. We recommend planting Chandler in a standard spaced orchard for long-term maximum yields (25 ft. x 25 ft. minimum on poorer soils, wider on better soils). If a hedgerow design is still desired, then consider Howard, which is a less vigorous, smaller tree than is Chandler. 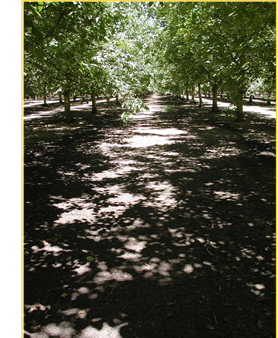 Planting walnuts at the correct density so trees fill their space without crowding should reduce shading and may help avoid the need for mechanical hedging, both of which should help minimize dead wood and reduce disease pressure. Later selective pruning to remove dead, diseased, and broken limbs is likely to pay dividends in helping to manage pressure from diseases such as Botryosphaeria.