Navel orangeworm (NOW) is one of the important pests that draws nut crop grower’s attention throughout the season.

Although the economic damage may not be significant every year, the unpredictability associated with this pest makes it difficult for growers and PCAs to relax some of their pest management practices. The current NOW integrated pest management (IPM) practices include: (1) winter sanitation to remove and destroy ‘mummy nuts’ before mid-March, (2) mating disruption product application at the beginning of the season to gradually reduce the NOW population, (3) timely harvest to minimize late-season infestations, and (4) one to two insecticide spray applications during hullsplit. All of these methods are commonly used IPM practices and should be combined to achieve the best results. As insecticide is a part of the NOW IPM strategy, in the 2020/2021 seasons, we evaluated the efficacies of multiple insecticides against NOW using the previous season nut (i.e., mummy nut) strands as substrate. We used mummy strands to compare insecticide efficacy as conducting large field trials is not always feasible, especially when several treatments with multiple replications are needed. Almond mummy nut strands have been used to evaluate insecticide performance in several other NOW studies.

The insecticide study was conducted using mummy nut strands that consisted of 20 mummy nuts glued to a strand cut from window screen material (Photo 1A). 15 to 20 mummy strands (20 replicates in 2020; 15 replicates in 2021) were used for each of the 11 insecticides and a water-treated control (Table 1). All insecticide concentrations were prepared in water using the 100-gallon per acre rate. The strands were thoroughly dipped in two quarts (1.89 L) of the prepared insecticide solutions for 10 seconds, allowed to air dry for about 30 minutes, and deployed to the selected trees in an almond orchard (Photo 1B). Two rows of a pollinizer variety (in 2020) or three rows of Nonpareil variety (in 2021) were selected in the orchard, and one strand of each treatment (Table 1) was hung in a total of 15 to 20 trees. Experiments were set up in mid-August of 2020 (targeting the 3rd NOW generation) and late April of 2021 (targeting the 1st NOW generation). The nut strands were left in the field for two weeks to provide enough time for female NOW to lay eggs. Once collected from the field, we carefully looked at the NOW larvae under a microscope, and the percent nut infestation for each strand was calculated and used for statistical analysis. One-way analysis of variance (ANOVA) was used to determine whether or not percent nut infestation was affected by the treatments, and the Tukey-Kramer honestly significant difference (HSD) was used to compare treatments. 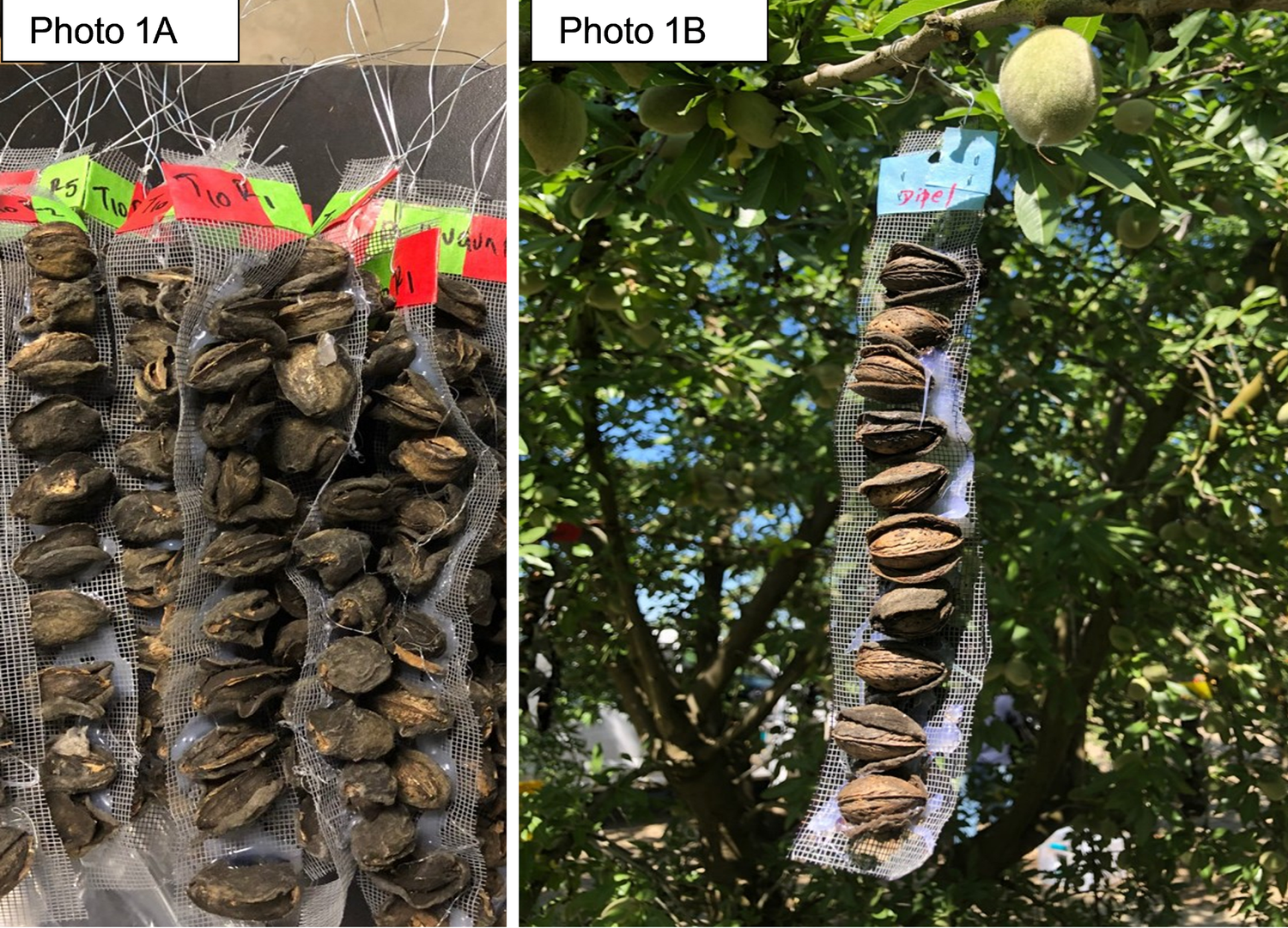 Note: Venerate was used only in 2020; BT NOW and SpearLep+Leprotec were used only in 2021. * IRAC (Insecticide Resistance Action Committee) assigns different numbers for insecticide active ingredients with varying modes of action (MoA). In general, avoiding the repeated spray of the insecticide(s) from the same IRAC group help to reduce the risk of insecticide resistance.

The results of this insecticide efficacy study were similar in 2020 and 2021. The NOW infestation of the control treatment exceeded 15% (approximately 16% in 2020; 18% in 2021), but this was not surprising because we anticipated a high infestation rate due to the limited number and spatial proximity of mummy nuts in each nut strand, and multiple strands in individual trees. The likelihood of egg laying by female moths in that scenario is higher relative to a scenario where mummy nuts are fewer in number and randomly distributed on the tree. 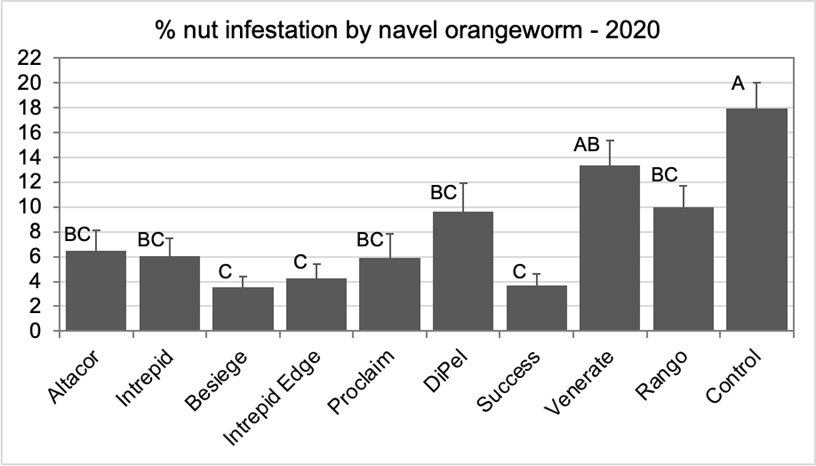 Figure 1. Effect of insecticides on NOW infestation, 2020: Treatments with a common letter had a similar NOW % nut infestation and were not significantly different based on the Tukey HSD (5% level of significance). 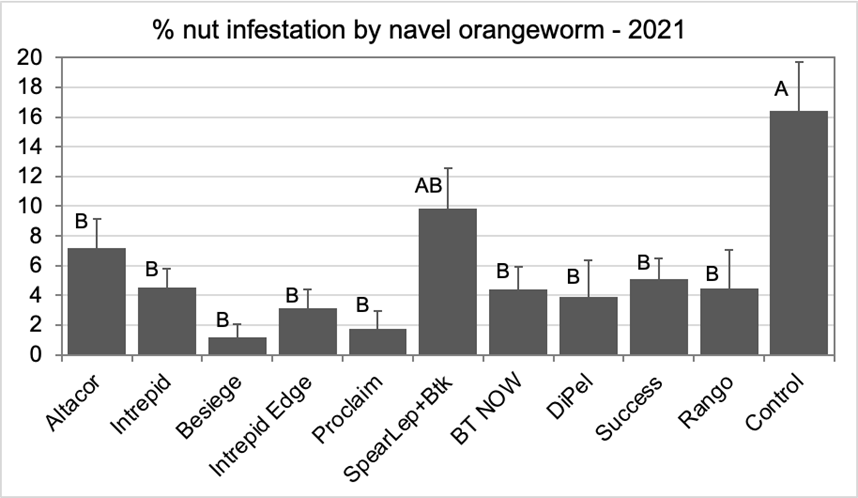 Figure 2. Effect of insecticides on NOW infestation, 2021: Treatments with a com- mon letter had a similar NOW % nut infestation and were not significantly different based on the Tukey HSD (5% level of significance).

It is no secret that insecticides cannot reduce NOW infestation to zero. Navel orangeworm insecticide efficacy trial results depend on the season, treatment methods, population levels, etc. This makes it challenging to identify which product provides the best and most consistent protection against orchard infestation. Additionally, NOW damage in almond orchards varies tremendously, even within the same block, and as a result, there can be limited efficacy of even the established insecticides such as Altacor and Intrepid evaluated in this study. Four main groups of insecticides were used in this study and, in general terms, these were: (1) broad-spectrum – pyrethroids or other combo products (e.g., Besiege, Intrepid Edge; Mitecto Pro – not included in our trial), (2) reduced risks – larvicidal (e.g., Altacor and Intrepid), (3) biological-based (e.g., DiPel, BT NOW, Rango, SpearLep, Venerate, and Success), and (4) all but the SpearLep can also be used in the organic production system. It is not recommended to use pyrethroid-based or other combo insecticides because of their potential negative impacts on mite predator – sixspotted thrips, especially when applied during the early part of the sea- son. There is also the high risk of NOW developing resistance to pyrethroids, something that has already been documented in the southern San Joaquin Valley. The larvicidal insecticides (e.g., Altacor and Intrepid) have been shown to do a good job in reducing NOW infestation, as indicated by several experiments, including ours. However, even though there is currently no evidence of NOW resistance to these ingredients, as an industry, we need to explore additional active ingredients to reduce the burden on a select number of these products. Studies show that biological-based insecticides can be used to reduce NOW infestation. Biological-based products may also be able to substitute for synthetic insecticides under a time crunch when time is running out, to use other insecticides due to higher pre-harvest interval, and the biological-based products may be the only viable option. Not all biological-based insecticides are created equal in terms of efficacy and impact to the natural enemies, so more research is needed to explore more options. Besides the insecticide active ingredient, other factors can play roles in spray coverage to get the insecticide to the target, thereby reducing NOW dam- age. For example, application parameters such as tractor speed of 1.5-2 miles per hour, routinely-calibrated sprayer, well-timed sprays based on the NOW activity, and hullsplit timing contribute to a better spray cover- age. Although insecticide is a part of the navel orange- worm IPM, it is critical to prioritize and utilize non- insecticidal interventions such as winter sanitation, mating disruption, and timely crop harvest before applying insecticides.

The California Department of Food and Agriculture (CDFA) partially funded these studies. We give thanks to Chang Vue, Tania Herrera, and Daniel Green for their help in this project.