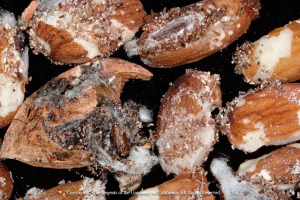 What’s the solution? A NOW management program in almond orchards in the Sacramento Valley should include 1) winter orchard sanitation, 2) early harvest, and 3) a hull split spray if necessary. Not all three steps are needed in every year.

Why sanitize? NOW population overwinters in almond orchards as larvae in mummy nuts. The adults emerge, mate, lay eggs on mummies, and larvae must feed on mummy nuts until hull split of the new crop in the summer. A carefully sanitized almond orchard starts the season with a low NOW population and low food supply for any remaining NOW moths or those entering from nearby. Removal and destruction of mummy nuts in the winter provides two important steps in NOW management:

Why an integrated approach? Combining all three parts of an integrated NOW control program delivers the best pest control results. Sanitation reduces overwintering populations and NOW food source in the spring, but can’t protect splitting nuts in the summer from the few remaining NOW or those flying in from outside the orchard. NOW populations that move in at hull split can build rapidly on the new crop.

Hull split spraying provides only partial NOW control (50% in many experiments) due to the difficulty of 1) controlling a pest with sprays when egg laying occurs over a period of time and 2) getting good spray coverage — especially in the tree tops. Early harvest requires longer drying time on the orchard floor, something some growers – especially those with micro-irrigation — have moved away from to get water back into the orchard as quickly as possible, but, it is a key component of a good NOW control program and it is much better than harvesting later and getting caught by rain.

How to sanitize? Here is a check list of practices that make up a complete sanitation program.