With Valentine’s Day just behind us, folks may still be feeling the romance in the air. Unfortunately for almond trees, humans aren’t the only ones in an amorous mood this time of year. Late winter to early spring (roughly December through early March, depending on climate) is also the time of year that pocket gophers are usually cranking up their Barry White playlist. This reproductive pulse generally results in three to five young per litter, roughly doubling to tripling the population of gophers that feed on almond roots and crown. That’s one reason why reducing gopher populations ahead of this reproductive pulse is the most time-effective way to reduce gopher damage in your orchard. Soil is also generally moister this time of year. This means gophers are more likely to be making fresh mounds, making them easier to find. It also makes the necessary management easier when digging and probing, and safer and more effective when fumigants are used. Three commonly used tools in an integrated gopher management program include trapping, rodenticides and burrow fumigants.

Trapping is highly effective for controlling gophers. Though trapping can be time-consuming, the cost is generally offset by the effectiveness. Research has found ways to reduce time spent deploying and checking each trap, and increase effectiveness. Recommendations for gophers include:

Rodenticides can be used by inserting into gopher tunnel systems. Strychnine is by far the most effective rodenticide for pocket gopher control, but it has become less available in recent years. Application is made through direct placement into the burrow system via hand application, an all-in-one probe and bait dispenser, or through a tractor-drawn burrow builder. Pocket gophers can become resistant to strychnine if it is used repeatedly as the only management tactic, so be sure to mix other tools in occasionally when using a strychnine baiting program. All rodenticides are considered restricted-use products when used in production agriculture settings. Zinc phosphide may be an easier rodenticide to find and purchase. However, it is sometimes avoided by gophers, and as such, may not be the most effective strategy. First-generation anticoagulants (e.g. chlorophacinone, diphacinone) can be used to manage gophers, although they are often not very effective because they require multiple feedings by the target pest.

Burrow fumigation. Fumigant gases must stay in the burrow system to be effective, so proper soil moisture and no soil cracking are critical, making this the key time of year for using this approach. There are several fumigant options which have varying degrees of efficacy.

Aluminum phosphide is effective in controlling pocket gophers, but is a restricted use material that can only be used by or under the direct supervision of a Certified Applicator. Pellets or tablets dropped into tunnels react with moisture in the tunnel to create a toxic gas. This means success is contingent upon finding active tunnels, not tunnels that have been backfilled. If the applicator is new to gopher management, or a little rusty, it’s good practice to probe the suspected tunnel area, paying attention to the level of resistance once the probe hits the tunnel, then dig out the tunnel to check whether it’s hollow or has been somewhat back-filled, and repeat this testing until the applicator can tell the difference between tunnel types at least four out of five times. Note that these pellets or tablets will only turn to gas if soil moisture is relatively high. If you can ball up a clump of soil at the burrow depth and it maintains that ball in your hand, then soil moisture is high enough to fumigate; if the clump falls apart in your hand, it is too dry. If properly applied, this is often the most efficacious mode for decreasing gopher populations, however it can require more effort because of associated applicator and posting regulations. If there is a large population in an orchard, fumigation with aluminum phosphide is likely worth the effort, but for smaller populations baiting or trapping is likely more time and cost-effective.

Carbon monoxide-generating machines such as the PERC, Burrow Rx, and CO-Jack inject pressurized carbon monoxide exhaust into the burrow system which asphyxiates the pest. Research has shown the PERC machine to be moderately to highly effective against ground squirrels but only moderately effective for pocket gophers. Other pressurized exhaust machines have not been thoroughly tested. Lower effectiveness and higher costs may potentially be offset by the speed at which acreage can be treated, especially for large orchards or high pest populations. For smaller acreage, custom service providers that offer use of these machines as a service may also be an option.

The most appropriate approach for a given orchard will depend on the size of the gopher population, the availability of the material and time, as well as number of acres that the cost of equipment can be shared across. When comparing efficacy of gopher removal and cost of labor and other inputs (Figure 1), the Baldwin lab found that for infrequent control (e.g. small acreage), fumigation with aluminum phosphide may be the most cost-effective approach. Trapping can be more cost effective after more than a few rounds of use because the traps are re-useable, whereas aluminum phosphide has to be purchased anew each time. Carbon monoxide becomes cost-effective after many more days of application, assuming a machine is purchased. Hiring as a service may be more cost-effective than shown here. Rodenticides were not used in this side-by-side comparison, but would likely be relatively comparable to aluminum phosphide applications if strychnine is applied via an all-in-one probe and bait dispenser.

Whichever approach is used, the most effective population control comes with waiting one to two weeks, then making a second clean-up pass to remove gophers that weren’t killed in the first round of treatment. Waiting one to two weeks after the initial treatment period allows you to target remaining gophers that might have been missed the first time given variable mounding efforts by gophers; it can be a week or more between gopher mounding events. A little waiting will make the gophers you missed the first time easier to find the second time. 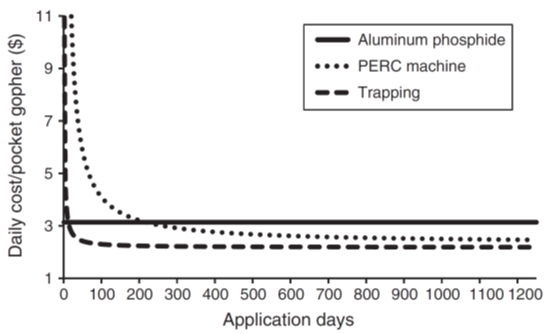 Figure 1. The amortized daily fixed cost plus labor cost per pocket gopher removed for three management tools in alfalfa fields during winter in northern California. These calculations assumed an 8-hour work day at $12 per hour.